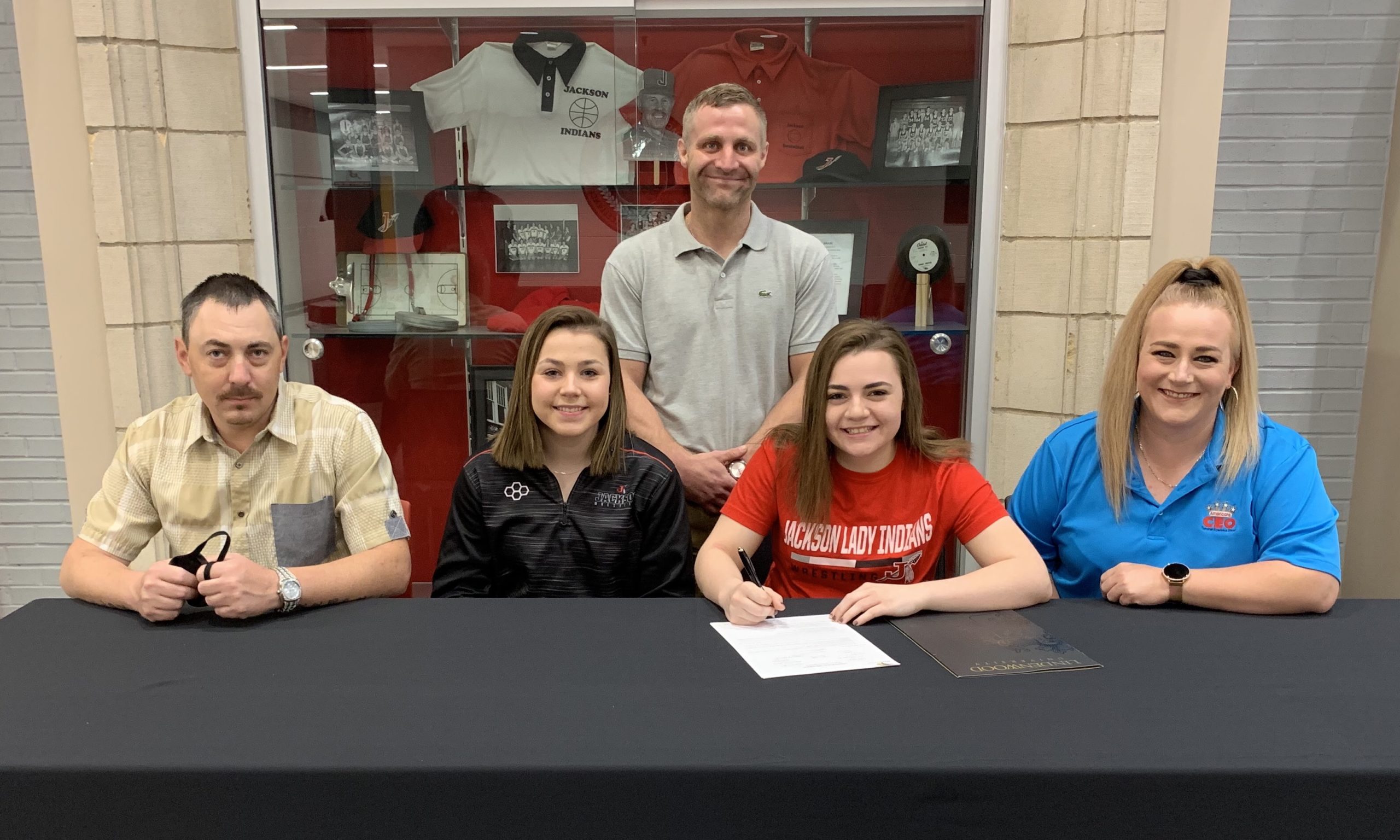 Jackson 2021 graduate Kayla Hodges signed her national letter of intent with Lindenwood to continue her wrestling career in May. Submitted photo

Before the 2019-20 winter sports season, Jackson never had a girls wrestling program and 2021 graduate Kayla Hodges had never thought about competitively wrestling before. That all changed when JHS added girls wrestling that year, which is when Hodges and her younger sister, junior Kassie Hodges, took up the sport.

The Hodges sisters were the only two females in the wrestling program that first year, but make no mistake, they weren’t strangers to combat sports. Kayla and Kassie entered their first year of wrestling with martial arts experience (jiu-jitsu, judo and muay thai), which their parents had them begin for self defense purposes.

Martial arts is something these sisters now do up to six times a week because they have fun with it, and from time-to-time they compete in competitions as well. With wrestling, Kayla said it has given her the mentality of, “If I’m going to do something, I’m going to do it. It’s going to get done.”

This is the mindset that allowed Hodges to etch her name into the Jackson wrestling history books by fulfilling not one but two of her dreams this year.

Not only did Kayla become the first girls wrestler in Jackson history to qualify for state in the 2020-21 season, but she also became the first to ever sign a national letter of intent last month. Hodges did so with Lindenwood, which is the same Division-II school Jackson’s former three-time all-stater Alec Bailey signed with in 2020.

“It’s a huge deal because of the amount of time I’ve initially wrestled — it’s almost insane [wrestling in college] is even an option for me,” Hodges said. “I applied there because I noticed they had a really good law program, and they had women’s wrestling. I was like, ‘I’ll just put down I’d be interested.’”

Over Christmas break, Hodges received a phone call from Lindenwood’s head coach Mike Mena and asked her, “How does signing with us sound?” Hodges, who had several offers to wrestle collegiately, couldn’t help but to turn down the offer.

“It really didn’t matter what division I was signing, but when I saw they had a sign that read, ‘First two-time national champions’ on the wall when I visited, I was like, ‘This is cool. I could kind of want to go here,’” Hodges joked.

Hodges decided to go out for wrestling because one of the boys wrestler’s parents thought Kayla would be the type of person to stick with the sport and help the program grow.

Since the Hodges were the only two female wrestlers in the program their first year, Kayla said it felt like they were basically on the boys team because they were either wrestling each other or the guys around their weight class. She expressed that the male wrestlers made them both feel like they were a part of the team.

“It definitely was challenging because they had never had a girl — let alone two — on the team,” Hodges said. “We were not necessarily the outcasts, but we were new, so all of the attention was on us.

“We obviously had a lot to prove, and we had the same expectations as the guys did. We went through all the weight cutting and exercises they did. There wasn’t any, ‘Hey, you’re a girl, so you can slack off a little bit.’”

One of the things that made that first year of wrestling easier for Kayla was having her sister Kassie as her “go-to” person, which has been the case for most of her life. “I had my 100% supporter right there, and she understood what I was going through as much as I did her.”

Fast forward to this past winter and five more girls joined the team in juniors Gracie Metzger and Mallorie Metzger, and sophomores Maggie Gibbs, Trynity Vanek and Kaiden Weisbrod. These Indians were able to finish second place in the SEMO Conference and fifth overall in the district tournament.

To no one’s surprise, Kayla finished with the best overall record at 20-7 (.740) while winning a conference championship and qualifying for state at 143 pounds. While wrestling at 137, Kassie finished behind her sister with a record of 14-8 (.636) but won a district championship.

Mallorie Metzger tied for the most wins with Hodges at 20-12 overall and was also a conference finalist at 122, while garnering academic all-conference with Gracie and Weisbrod.

“Now that there’s an actual girls team, we can all circle and filter in,” Hodges said. “… I got really excited because I knew finally as a team we were going to score more points. We almost won the conference title, and it was just our first official year of having half a lineup.

“[Having enough wrestlers for a team] was really, really exciting for me personally because that was my goal — to get as many girls in there as I could. Not very many females can just do something like that I feel. It’s very physically and mentally challenging, so for them to step up and join the team made me really excited.”

To qualify for state, Kayla said she worked out three times a day: once in the morning, practice in the afternoon and individual drills after that. Hodges was only one win away from earning all-state honors as she fell in the consolation semifinals.

“State was honestly not what I expected — I’ve never been in such a position where all the eyes were on me,” Hodges said. “The seats were full and there were people online keeping up with me and wishing me luck.

“People I’ve never even heard of were like, ‘This is amazing. Thank you so much for getting this program because now my daughter is looking up to you.’

“I’ve always kind of been in that role model position with my sister because she’s younger, but to have other people I’ve never even met looking up to me is such an honor.”

Hodges was awarded a blue belt in jiu-jitsu recently, so she now competes against women who have five-plus years of training. Nonetheless, she placed third at state.

The reason why Kayla is pursuing a law enforcement degree is because she wants to be a DEA agent. “I can use my training for good, and I want to help people.”