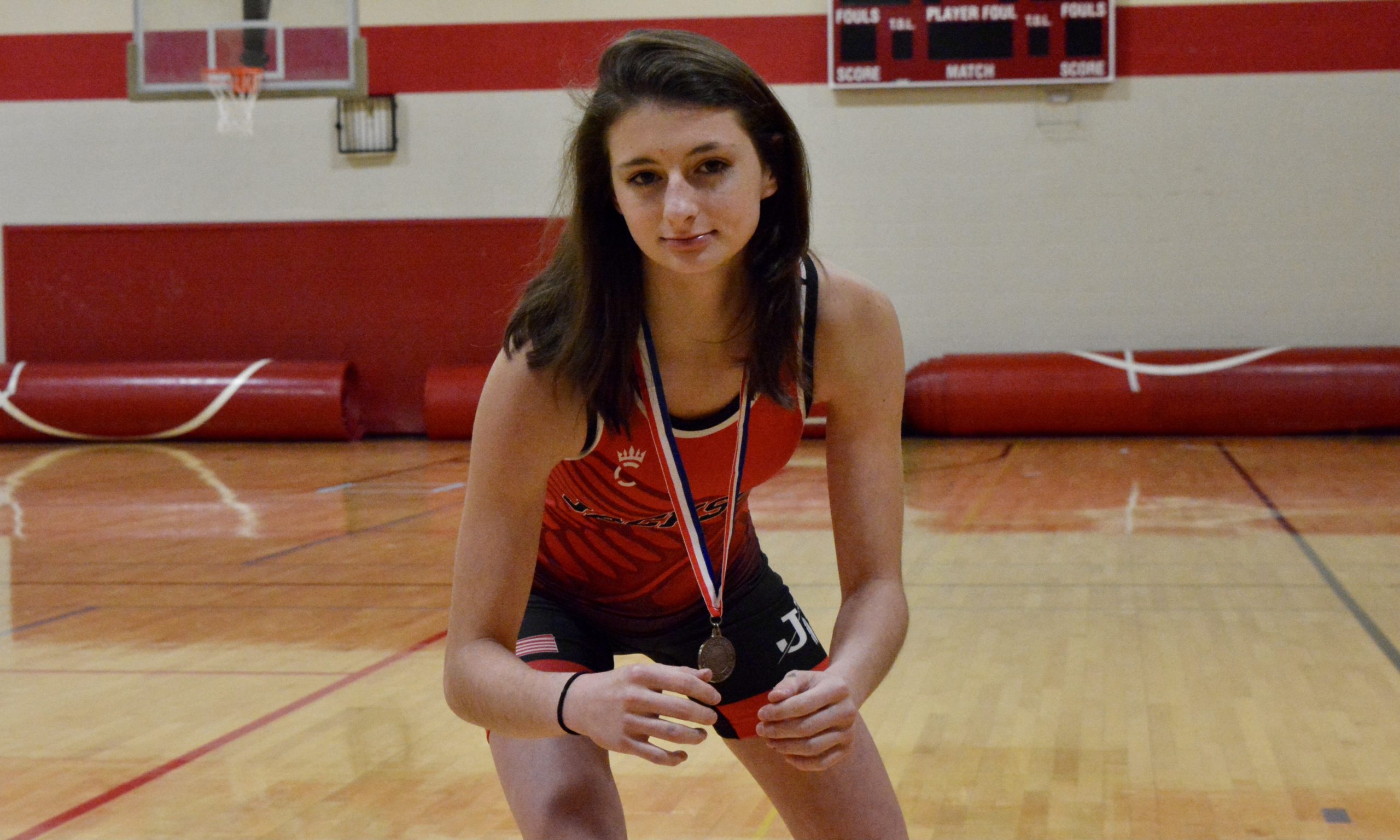 Jackson’s Mollie Metzger finished with an individual overall record of 20-0 in her first year ever of wrestling competitively this season. Photo by Jay Forness

Despite the fact of not having ever wrestled competitively prior to this season, Mollie Metzger did what no other eighth-grade girl has ever done before in Jackson history — she went undefeated.

Metzger, who was the only girl on Jackson’s junior high team this season, finished with an unblemished record of 20-0 overall while wrestling against boys and girls. Mollie did so in dominating fashion as she won 18 of her matches by pinfall (nine in under one minute) and only had two last all three periods to finish via decision.

“Having an undefeated season means a lot to me. This is a mentally-tough sport,” Metzger said. “You have to go out there with the mindset of, ‘I’m going to beat this person to the ground,’ and you have to be like, “OK, I can do this.’

“In my matches, I was so scared of like who I was going up against. Then I was like, ‘No, I can do this.’ Having an undefeated season has motivated me even more. When I’m a freshman, I may not have a ‘cake walk,’ so I know I’ll have challenges.”

What Metzger enjoys the most about wrestling is that she has been able to earn respect by what she does on the mat alone. This is because Mollie describes herself as very independent and prides herself in relying on herself.

Metzger’s other favorite part about wrestling is when the referee raises her hand after winning a match. “It’s the best thing, and then right afterwards you get to go to McDonald’s or something,” Mollie laughed.

Another aspect of wrestling Metzger enjoys is when a coach gives her praise, but she also likes it if they tell her there’s something she needs to work on. This is because Mollie then knows she can indeed become better.

One could say Metzger was ahead of the game, though, compared to anyone else who was just starting out. This is because Mollie’s two older sisters and current Indian junior wrestlers Gracie and Mallorie Metzger, unsurprisingly, made her wrestle with them.

“They kind of forced me into it, but I was like, ‘I don’t have a choice, so why not?’” Metzger said. “I got a little experience and learned some moves. Wrestling is not new to me, but I could definitely use some training.

“When I first got into wrestling, I knew nothing. I was just like, ‘What do I do?’ They showed me all of the positions, and I would do it over and over again till I got it memorized.”

At the beginning of wrestling season, Mollie said she would become so frustrated to the point where she ended up crying because she wanted be as good as her sisters were from the get go. Gracie and Mallorie were able to calm Mollie down, though, and relieved her with the fact of, “Stop comparing yourself to us. You only just started, and we’ve been doing this for two years now.”

With this being the case, Mollie worked as hard as she could each practice regardless if she was having a bad day or was suffering from a migraine. Metzger said this approach made her feel really good about herself because it’s going to lead her one day to being as great as she aspires to be.

Even though her sisters Gracie and Mallorie have only wrestled a few seasons now, Mollie still gloats to them from time-to-time about her undefeated season.

“Like in the middle of the night, I’ll walk into their room and be like, ‘Hey, I’ve had an undefeated season. You didn’t. OK, bye,” Mollie laughed.

Metzger noted that since she practiced so much with her sisters that it made this season pretty much a “cake walk,” especially when she faced opponents who didn’t have much experience. Mollie really enjoyed the more challenging matches, like when she faced a boy out of Windsor at a tournament hosted in Hillsboro.

“He was tough and mean, and I was just like, ‘Oh, this is going to be a battle.’ I won by points and had a bloody nose,” Metzger recalled. “He would like shoot on me, and I would sprawl.

“He would try to pick me up and slam me to the mat, but I’m hanging in there like, ‘No, I’m not breaking.’ This was at the end of the match, and I wasn’t breaking at all. He didn’t know what to do, and I’m just still sitting there in my resting position.”

Metzger ended up winning the match 3-0 in sudden victory to remain undefeated, but she also had another memorable moment at the same tournament. This time it was against a girl from Hillsboro in a match Mallorie described that kept viewers on the edge of their seats.

“She was exactly like the guy — she was mean and tough. We were both tiring each other and in the dirt — it was a match,” Metzger said. “I was on top of her, and so what I decided to was go into a cradle and roll her over for the pin.”

This was a learning experience for Metzger because it’s taught her to always look for advantages to find ways to pin opponents. This is now something that comes easier to Metzger because she now quickly notices when she has an opportunity to pin her opponents.

Outside of wrestling, Metzger also runs cross country and track and field like her sisters do, but she said she doesn’t enjoy these sports as much as wrestling because there’s less action.

Next winter, Metzger will be a freshman and join her sisters Gracie and Mallorie on Jackson’s high school team in what will be their final season as an Indian. Mollie even already has a nickname for the trio, “The Three Metzgerteers.”

“It’s going to be pretty fun because we’ll also get to practice with each other,” Mollie said. “There’s been multiple times where we’ve scratched or poked each other in the eye, and then we would go at it.”

Girls wrestling was actually just adopted as a sponsored sport by the Missouri High School Athletics Association in 2018, and Jackson’s team had its first all-stater and college signee last school year. It’s a sport that still isn’t as popular for girls as it is for boys, so Mollie would encourage anyone who might be on the fence about it to try wrestling out.

“At the beginning of the wrestling season, I thought I was going to lose every match,” Metzger said. “You never know what’s going to happen. It’s like swimming: If you don’t jump in the water, you don’t know if you’re going to sink or swim. Well, I swam. If you sink, you can always rise back to the top. If you swim, keep going.”