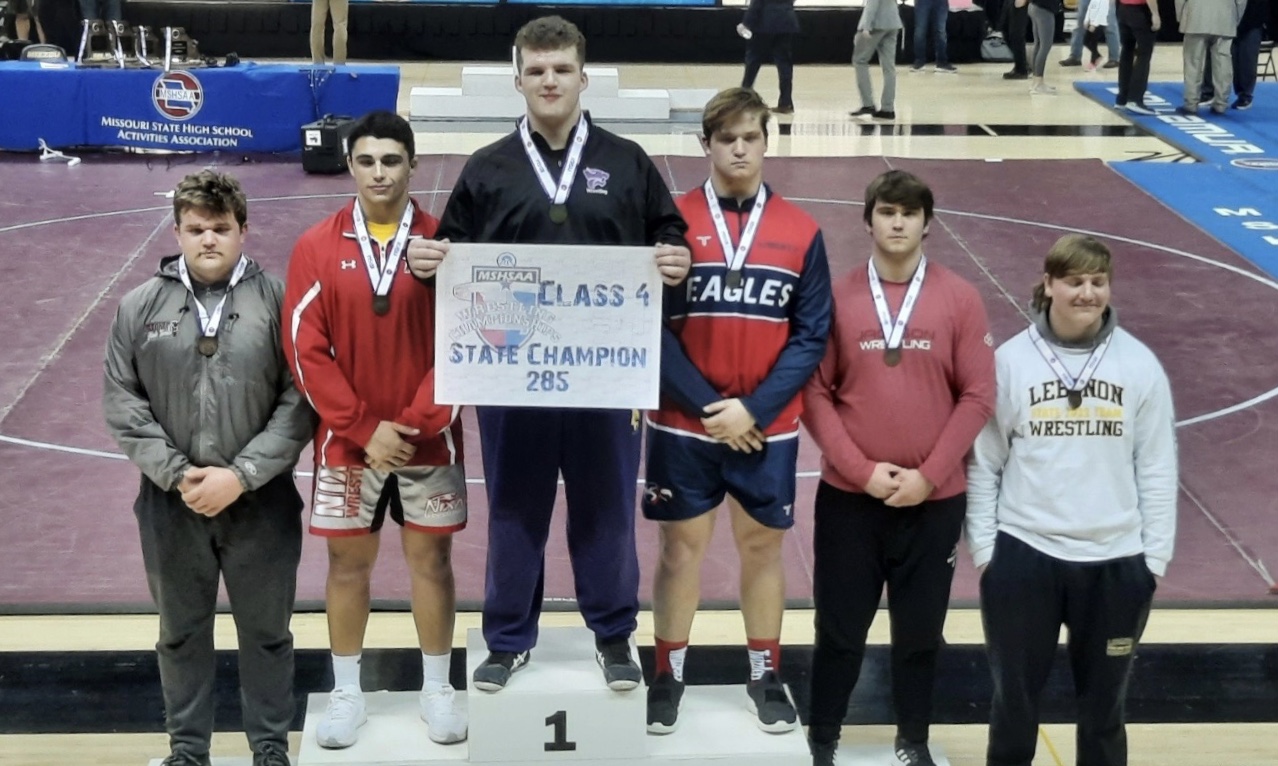 Last week, Jackson and Notre Dame sent a combined total of 12 wrestlers to this year’s state championship tournaments held at Mizzou Arena. The Indians had seven boys and one girl reach state, while a total of four Bulldogs compete in Columbia.

Only four of those wrestlers finished with a spot on the podium, though, as Jackson and Notre Dame both finished with two all-state medalists.

Senior heavyweight Liam Bryant and sophomore 106-pounder Landon Vassalli finished in the top six of their respective weight class for the Indians, as senior 138-pounder Owen Dowdy and senior 195-pounder Trey Schreckenberg were the first-ever all-staters for the Bulldogs.

Bryant was only one win away from reaching the heavyweight state championship match, but he was unable to score on Liberty junior Matthew Craig (47-6) in the semifinal round. Craig ultimately beat Bryant via a 1-0 decision, and he ended up falling to Blue Springs junior Brock Sullivan (39-6) by the same score for the individual state title.

Reaching the championship semifinals guaranteed a spot on the podium for Bryant, and he was able to beat Lee Summit North senior Trevor Taylor (44-11) by decision at 1-0 to reach the third-place match. Liam was unable to win the final match of his career, though, by falling to Nixa senior John Gholson (39-6) via a 5-1 decision to take fourth place.

Moving to Jackson’s second and final all-state medalist, Vassalli (44-6) was actually able to place the highest for the Indians by taking third overall at 106 pounds.

Like Bryant, Vassalli was also able to reach the championship semifinals, where Landon fell to Liberty freshman Devon Harrison (33-7) by a 5-2 decision. Harrison fell to undefeated Hickman freshman Hank Benter (41-0), who won the 106-pound state championship by pinfall (one minute, 12 seconds).

Vassalli won his consolation semifinal match over Ft. Zumwalt North freshman Nathaniel Provost (32-14) via injury at the 3:06-mark. Landon took third place by picking up a 7-5 win over Ozark freshman Damien Mosley (40-10), who Vassalli had beaten 2-0 in sudden victory of the quarterfinals.

As for Notre Dame in the Class 1 State Tournament, Dowdy (45-4) took fourth place at 138 pounds after falling in the opening round. Dowdy fought back and recorded four-straight pins to do so.

In the final wrestling match of Dowdy’s career, he only lost by one point via decision at 5-4 to Marceline sophomore Conner Quinn (30-9).

Schreckenberg (35-4) was able to win his first-round matchup unlike Dowdy by pinning Lawson senior Xander Mavel (29-16) in just 29 seconds. He then only fell to Knob Noster sophomore Trey Payne (35-6) by a 1-0 decision in the quarterfinals.

Payne was then pinned by Mid Buchanan junior Wade Stanton (44-2) at the 5:46-mark, and Stanton went on to win the 195-pound state championship by pinning Diamond senior Landon Clement (40-6) for the title.

After losing to Payne in the quarterfinals, Schreckenberg had to win two matches in order to take home a state medal. Trey first pinned Sherwood senior Tyler Burgin (20-17) in 33 seconds, followed by a 6-4 win over Brookfield senior Trent Polley (8-4) in the consolation quarterfinals.

Schreckenberg was pinned by Trenton junior Sam Gibson (38-3) at the 2:42-mark in the consolation semifinals, which landed him a spot in the fifth-place match. Schreckenberg was able to win his last high school wrestling match 5-4 over West Platte junior Lane Scott (43-9) to finish in fifth place.