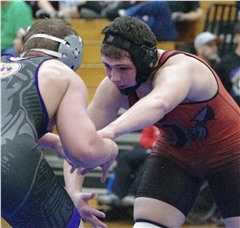 The Jackson wrestling team enters this season in unusual fashion compared to previous years, and this is because the Indians only return one Class 4 State Qualifier.

All three of those wrestlers returned to Columbia last season along with fellow senior Zach Flath and freshman Cole Amelunke.

At 195 pounds, Amelunke failed to place at state by going 1-2 overall, having lost his first match to eventual third-placer in Park Hill freshman Ashton Sharp by a 1-0 decision.

In the first round of the consolation bracket, Ame-lunke pinned Timberland senior Joseph McCoy 39 seconds into the second period.

Amelunke then faced the District 1 Champion in Parkway South senior Jack Marak in the second round of consolation, losing via a 3-1 decision. Marak went on to place fifth in the 195-pound weight class.

“There are some years you have returning qualifiers and returning medalists, and so this year I just have one,” 24-year head coach Steve Wachter said. “This year as a coaching staff we’re really looking at this season as we really have to focus on what we do have and look at it as a challenge.”

One key focus for Coach Wachter and his staff will be working on with this year’s team is improvement, calling it “the name of the game” with such a young group of wrestlers.

Out of the 14 weight classes, eight of those spots will be filled by underclassmen, including Amelunke.

Coach Wachter believes Amelunke could move down a weight class and wrestle at 182 pounds his sophomore season since he can make the weight.

Taking the 195-pound position, if Amelunke does wrestle at 182, would be junior Nathan Reiminger.
Wachter said both could wrestle either weight class this year.

Jackson only has two seniors on this year’s roster in all-conference wrestler Jacob Dudley and Owen Leible, who were both varsity wrestlers in their respective weight classes last season.

Dudley then fell to Eureka sophomore Matt Gentry in the third round of the consolation bracket in a 1-0 tiebreaker for his season to come to an end.

Dudley suffered an injury this offseason late in the summer, so he has been working to bounce back for his final season at Jackson and will continue to wrestle at 160.

Leible, who just finished his career with the football team as a three-year starter on the offensive line, nearly qualified for the state championship meet last year by losing 1-0 in the consolation semifinals at districts.

Leible went 9-8 overall last season at 285 pounds, during which he suffered an injury, allowing junior Braxton Green to fill in throughout the middle of the season. Green will fill the heavyweight position for the junior varsity team with freshman Zane Collier also seeing some matches.

Jackson returns two SEMO Conference Champions from last season starting with upperclassman Braden Vaugier, who will make the move to 138 pounds as a junior after wrestling at 132 and going 36-9 overall last season.

Coach Wachter described Vaugier as being one of the team’s leaders this season, and joining him as a returning conference champion is sophomore Alec Bailey.

Bailey, who went 37-6 overall at 106 pounds as a freshman last year, will move up one class to 113 pounds after having what Coach Wachter called an incredible offseason due to Bailey attending every possible camp he could.

“Wrestling is [Bailey’s] thing, and that’s where he puts in all his time,” Coach Wachter said. “His growth has been really tremendous. He’s really an outstanding technician, and we’re still working on the other aspects such as his strength and things like that. I couldn’t ask any more from him — he really did a great job over the offseason.”

Wachter said strength as well as confidence is something his team will struggle with this year simply because of how young most of these wrestlers are. This is also the lowest number of wrestlers he has had come out for the team at 30 in the last 10 to 15 years.

“When you are 18 [years old], you have a lot of strength, and usually your stamina is better late in the year,” Coach Wachter said. “We’ll have to work really hard in that area for not only my freshman and sophomores, but everybody. That’s the big challenge and then here comes that confidence part.

“When you are a senior, you are more confident, and you also know it’s your last time that you’re going to be doing this. When you only have a couple seniors, it puts a lot of heat on those young kids, but they’ve got to step up and meet that challenge. We don’t have any choice.”

One freshman who will be wrestling on the varsity squad this season is Cole Parker, who placed fourth overall in last year’s Missouri USA State Championships.

Parker will be filling in the void at 152 pounds left by Payne Guilliams, who earned Class 4 All-State honors by placing fifth in last year’s state meet.

Coach Wachter believes Parker is more than up for the challenge as his background in USA Wrestling has given him experience on the mat, but he also has the mentality to handle anything he faces.

Another freshman Coach Wachter has filling one of his varsity spots is Garner Horman, who has also been “through the ropes” in the USA Wrestling ranks by taking second overall in last year’s state meet.

Horman will fill the spot left by Vaugier at 132, and Wachter is excited to see what Horman can do for the team because of the dedication, focus and work ethic he has shown thus far.

One wrestler coming up from the junior varsity ranks is sophomore Noah Uhrhan to fill the spot in the 145-pound weight class for Jackson.

Uhrhan went 31-0 as a freshman last season, whom Coach Wachter describes as one of his wrestlers who displays a high motor.

Another high-motor Indian is junior Justin Singleton, who will continue to wrestle at 170 pounds for Jackson this season. Singleton was 32-10 overall last season and went 2-2 at districts to come shy of reaching state. He earned SEMO All-Conference honors last year by placing third in the conference meet.

Filling Gus Guilliams’ 126-pound spot is sophomore Levi Kaelin, who is another wrestler to have a promising offseason in Coach Wachter’s eyes after helping lead Jackson’s junior varsity team to a 26th consecutive undefeated season.

At 220 pounds, it will be a competition between juniors Wesley Blattel and Kevin Crites as one will fill the varsity spot and the other will compete on junior varsity.

This will be the same at the 106-pound weight class with sophomores Rhett and Riley Wiseman battling for the varsity spot with the other filling the junior varsity position.