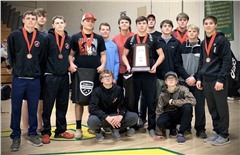 The Jackson wrestling team began the final half of its season by winning yet another tournament as the Indians took first place in the 52nd annual Kinloch Classic for the second-straight year over the weekend.

The tournament featured mainly teams from Missouri but also a few from Arkansas for a total of 24, but none of them came within 117 points of the Indians, who finished with a final score of 379.

The team that finished as the Kinloch Classic runner-up was Raymore Peculiar, which scored 262 points while Helias Catholic finished in third at 234.5.

Out of the 14 available weight classes, Jackson had 11 wrestlers place in the top five as four finished at the top of the podium in their respective class. Those Indians were senior Cole Amelunke at 195 pounds, senior David Ekstam at 220, junior Garner Horman at 152 and finally junior Cole Parker at 182.

These four were also the only wrestlers for Jackson to reach a first-place match as six of the other team’s wrestlers to finish on the podium finished the tournament wrestling for third place.

Amelunke and Garner Horman are the only two members of Jackson who are still undefeated in varsity competition, who currently hold records of 14-0 and 13-0, respectively.

Amelunke has not wrestled at 195 pounds for this long of a span since he was a freshman, but he has now won two tournament championships with three more in the regular season until the district tournament.

Amelunke received a bye in round one, but after that he won all of his matches by pinfall until he faced Seif Elkhasnab (16-2) of Windsor for the 195-pound title. This bout lasted all three periods until Amelunke eventually came out on top via decision at 2-1 to place first and continue his undefeated streak.

Each wrestler Amelunke faced in the tournament had an individual record over .500 as he pinned two in the first period and the other two in the second.

Horman received one bye as well in round four along with a medical forfeit in round five before the second and final day of the tournament. He recorded three pin falls and one technical fall in the first day.

Horman made it look like an easy road to the 152-pound championship match as he recorded a pin in the quarterfinals over Helias Catholic’s Nikolai Careaga (22-7) 44 seconds into the bout. Horman then defeated Ozark’s Riley Sundlie (18-8) by major decision at 12-2 in the semifinals.

For the title, Horman faced Raymore Peculiar’s Kanen Huff (15-2) in a match that lasted all three periods, but Huff was unable to score a point on Jackson’s returning all-stater. Horman defeated Huff 6-0 to finish first on the podium for the second time already this season.

Ekstam (17-1) only had to wrestle in a total of four matches in the Kinloch Classic after receiving two-straight byes on day one. Ekstam then pinned his first two opponents within two minutes, the last which sent him to the semifinals.

Ekstam’s semifinal match against Rogersville’s Adam Reaves (16-9) went all three periods as Ekstam managed to pull out the 6-5 victory to advance to the 220-pound championship bout. Ekstam faced Raymore Peculiar’s Major Loftin for first place and did not allow a single point for his 3-0 win.

Parker (17-2) arguably had the most dominant tournament performance for Jackson since he didn’t receive a single bye and recorded five pins and one major decision. One of his pin falls came in the 182-pound title match.

All of Parker’s matches went at least into the second period and his first to last all three was in the quarterfinals against Rolla’s Colton Franks (4-3). Parker still defeated Franks 11-1 to reach the semifinals, where he pinned Branson’s Max Petruccelli (16-4) in the third period.

Parker finally went up against Windsor’s Chris Butts (12-3) for first place, and Parker pinned him with 48 seconds left in the second period to win the title.

Only half of Jackson’s wrestlers to compete for third place actually won and took third as Bailey (20-1), Riley Wiseman (19-2) and Kaelin (19-4) were successful in doing so.

Bailey was undefeated heading into the Kinloch Classic and had already won two tournament championships this season, but his streak came to an end in the semifinals. Bailey’s first loss was by the hands of Ozark’s Braxton Strick (24-4), who only defeated Bailey by two points in a 3-1 decision.

Strick went on to win the 126-pound tournament title with a 10-2 win over Christian Cartright (15-4) out of Branson.

Bailey final two matches of the tournament lasted all three periods as well and first picked up a 10-2 major decision win over Helias Catholic’s Carson Hayes (11-9) in the consolation semifinals. Bailey then faced Rogersville’s Riley Williams (18-6) for third place and came out on top 7-4.

Riley Wiseman also fell to one of the eventual Kinloch Classic Champions in Branson’s Kyshin Isringhausen (20-0) via a 6-0 decision in the semifinals. Isringhausen then defeated Hickman’s Ethan Barr 5-1 for the 113-pound title.

Like Bailey, Wiseman also picked up a major decision victory following his semifinal loss with a 10-0 win over Kickapoo’s Tobias Collins (12-10) and faced Helias Catholic’s Gavin Adams (18-9) for third. Wiseman defeated Adams 5-1 to end the tournament with a win.

Kaelin’s second and final loss of the tournament came earlier than the semifinals as he fell to Raymore Peculiar’s Jake Quest by a score of 1-0 in the quarterfinal round. Kaelin picked up two-straight wins in the consolation bracket to then face Quest once again for third place.

Kaelin was able to defeat Quest by decision this time around to be the third-highest member of the 145-pound weight class on the podium.

Jackson’s next tournament will be the Lafayette Tournament this weekend.