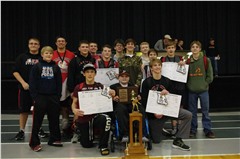 The Jackson wrestling team did something it has not done since the 1980s, and that was win a fifth conference championship in one decade.

The 2017 SEMO Conference Tournament was held Friday and Saturday at Dexter High School where Jackson hoped to reclaim the title from reigning champion Farmington.

The Indians did just that by scoring 341.5 points with the second-place team being Hillsboro at 275.5 points. Farmington placed third in this year’s meet nearly 100 points under Jackson at 246.5.

“We were glad to bring it back [to Jackson] again — we didn’t know for sure if that would happen this year,” head coach Steve Wachter said. “I was very proud of them [winning conference].”

Seven wrestlers for Jackson advanced to their respective first-place match, which was one less than the team had advance in last year’s meet.

“We have had some outstanding leadership by our seniors this year, and I think it really helped us with our confidence we needed going into conference,” head coach Steve Wachter said. “I knew the conference would be very close, and we had all talked about it between five or six teams. We knew it would be extremely competitive, and I just thought that maybe because of the leadership and because of our work ethic this year we rose to the occasion and really had a great conference tournament.”

This time though, six Indians came out on top to become a SEMO Conference Champion whereas last year only four won a first-place match.

“I’ve been on the other end of that when things didn’t go as well sometimes,” Coach Wachter laughed. “The last two rounds I think we only lost one match in the last two rounds of the finals and the consolation finals. So, our last two rounds were really big, and each round kind of elevated. And boy, in the last one we kind of put it all together, and sometimes that happens. It doesn’t always happen that way, but it did this weekend.”

Senior Gus Guilliams was one of the six to defeat his opponent in the championship round, marking for the third SEMO Conference Championship of his career.

The first two championships came in his freshman and sophomore season when he was wrestling at 106 pounds.
Guilliams lost in the 120-pound championship match his junior season against Ste. Genevieve’s Wesley Dickens, who went on to place third at the Class 2 State Championship meet that season.

In this year’s conference tournament, however, Gus pinned each of his opponents within the first two minutes of the match including his championship bout against Hillsboro junior Isaiah Beck.

Guilliams only needed 48 seconds to pin Beck’s shoulders against the mat for the win to win the title and advance to having an overall record of 33-1.

Gus’ cousin, senior Payne Guilliams, had similar success leading to his second-straight SEMO Conference Championship by pinning each of his opponents leading up to the first-place match within the first period.

Payne’s final match of the tournament did not end with him pinning his opponent because it actually lasted all three periods. Guilliams defeated Hillsboro junior Joseph Garner by major decision at 11-1 to earn his second conference title and is now 29-2 overall.

“That was really outstanding [for Gus to have won his third conference title and for Payne to have won his second] — that was a great effort by both of them,” Coach Wachter said. “I’m proud of all of my seniors, but I’m very proud of those two. They’ve really done a great job.”

Two other seniors also won a conference championship with the first being senior Zach Flath at 138 pounds. Flath won all but one of his matches by pinfall when he faced Sikeston’s Quincy Nelson in the semifinal round, but he still came out on top 4-2.

Flath faced Poplar Bluff’s own Josh Lawrineko for the 2017 138-pound SEMO Conference Championship, and Flath pinned him with 51 seconds left in the second period to win the title.

The final senior to win a title for Jackson in the tournament was 220-pounder Bryce Dickerson. Much like Flath and Payne, Dickerson also won all but one of his matches by pinning his opponent.

Dickerson faced Windsor’s Andrew Marler and pinned him with 40 seconds left in the first period to win the 220-pound SEMO Conference Championship.

The final two wrestlers for Jackson to win conference were underclassmen freshman Alec Bailey at 106 pounds and sophomore Braden Vaugier at 132.

Bailey, who is now 31-2 overall on the season, faced fellow freshman Travis Waldner out of Dexter. This bout for the 106-pound SEMO Conference Championship lasted all three periods with Bailey pulling out a 3-2 victory.

“Alec Bailey winning a conference championship against the Waldner boy from Dexter was a great win,” Coach Wachter said. “He has really put together a really great freshman season.”

At 132 pounds, Vaugier, who placed first in last year’s junior varsity conference meet, had three of his matches last all three rounds including the first-place match.

Vaugier faced Farmington junior Ian Asher for the 132-pound conference championship and defeated Asher 3-2. Vaugier finished undefeated at the junior varsity level last season and is 31-5 in his first year as a member of the varsity team.

The only wrestler for Jackson to lose in the championship round was freshman Cole Amelunke in the 195-pound division.

This match had to be decided in overtime though with Hahn coming out on top over Amelunke at 5-3.
“The other freshman that did outstanding was Cole Amelunke making the finals and losing in overtime to a ranked kid [Hahn],” Coach Wachter said. “I think he is ranked third in state in Class 2, so it was a great match for Amelunke. He did a great job.”

Being in the last half of the season with the district and state meet next month, Jackson will compete in one more tri-meet and then the Francis Howell Tournament. The tri-meet, which will feature Dexter and Poplar Bluff, is on Jan. 26 with the tournament starting the next day and ending Jan. 28.

“We’ve got a really tough dual coming up with Dexter and Poplar Bluff,” Coach Wachter said. “Bluff is very good — they’ve got a really good dual team, and I thought they had a really great conference tournament, too. They wrestled really well.

“And then we go to Francis Howell, which the competition there is really incredible. It will be a great tournament. I think there’s 33 teams in it, and some of those teams are really loaded. That will be good competition for us to get ready for the state meet.”