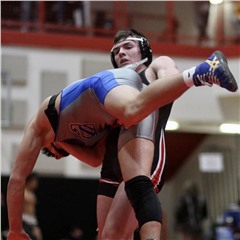 Two weeks ago before “Snowmageddon” hit, the Jackson
wrestling team was able to host this year’s Class 4 District 1 Tournament on
Feb. 13. The Indians placed in the top three while also having eight wrestlers
place in the top four of their weight class to qualify for Saturday’s sectional
tournament.

Even though Jackson did not come away with the district
championship, four of the team’s eight wrestlers to finish on the podium came
away with their own individual district title.

One of the Indians to walk away with gold was none other than
senior Garner Horman for his second-straight district championship. The 160
pounder, who won last year’s 152-pound district title, has yet to be defeated
this season and has an overall record of 28-0.

Fellow senior Cole Parker has only one loss on his resume and
was able to win his first-ever district championship by taking first at 182
pounds. He enters sectionals with the second-best record for Jackson at 22-1.

Coming away with the two other individual district titles for
the Indians were juniors Jace Davis and Liam Bryant, who won the 145 and
285-pound championships, respectively. Bryant has only suffered two losses
(27-2), while Davis has three to his name (30-3).

Jackson had two other wrestlers reach district title matches
as 152-pound junior Flint Guilliams and 170-pound sophomore Griffin Horman came
up short of claiming gold. Guilliams and Horman each have at least 22 wins,
while Horman, who has 24 victories, suffered his second loss of the season in
the district final.

The two final wrestlers for the Indians to finish in the top
four of their weight class was freshman Landon Vassalli (24-4) at 106 and
sophomore Tony Terry (20-7) at 220. Vassalli won his third-place match for a
bronze medal, while Terry suffered his seventh loss of the season in his final
match to place fourth overall at districts.

Going back to the championship bouts, Garner Horman only had
to compete in two matches in the 160-pound bracket as he received a bye in the
quarterfinals. In the semifinals, Horman took on Northwest junior Hunter Melber
(31-10) in a match that went into the second period, where Horman pinned Melber
at the three minute, 11-second mark.

Horman then faced off against Seckman sophomore Cole Ruble
(28-8) for the 160-pound district championship, which actually was a shorter
bout than the semifinal. It took Horman 55 seconds less to pin Ruble (2:50) to
win the district title than it did for him to pin Melber in the semifinal.

For Cole Parker to win his first-ever district title, he only
had to wrestle in two matches after receiving a bye in the quarterfinals as
well. Parker faced Seckman sophomore Michael Stivers (19-18) in the semifinals
as Cole pinned him 47 seconds into the second period.

Parker took on Lindbergh senior Carlous Crump (17-7) for the
182-pound district championship as Crump recorded back-to-back pins in the
first period to reach the first-place bout. Even though Parker’s title match
against Crump lasted all three periods, Cole still won handedly via a 13-0
major decision to claim the gold.

Winning the first individual district title of the day before
these two seniors was Jace Davis, who didn’t receive a bye in the first round
like Horman and Parker. However, Davis had no problem advancing to the
semifinals as he pinned Lindbergh senior Jack Dunaway (4-9) in 35 seconds.

Davis faced another senior in the semifinals as he was able
to defeat Oakville senior Ibragim Makhmudov (25-6) by a 7-2 decision to reach
his first-ever district championship match.

Davis faced Poplar Bluff sophomore Lucas Robertson (40-4) for
the 145-pound title, who Davis fell to by a score of 3-1 in sudden victory of
the SEMO Conference Tournament quarterfinals. Davis avenged this loss by
pinning Robertson in 58 seconds to win his first-ever district championship.

The final Indian to win their district title match was, of
course, Liam Bryant, who also didn’t receive a bye in the quarterfinals. Like
Davis, Bryant made quick work of his quarterfinal opponent by pinning Seckman
sophomore Matt Zeller (7-19) at 1:03.

Bryant’s next two matches lasted all three periods as he took
on Fox senior Mason Petty (15-3) in the semifinals, where Bryant was able to
win by decision at 1-0. For the heavyweight championship, Bryant went up
against Northwest junior Andrew Hinchey (29-11) in another match decided by one
point as Liam took home the gold with a 4-3 decision.

The first wrestler for Jackson that was unable to win his
district title match was Flint Guilliams (22-5), who defeated his two opponents
before the final with ease. Guilliams first pinned Seckman sophomore Gavin
Johnson (12-7) with 19 seconds left in the first period of the quarterfinals.

Guilliams’ semifinal match lasted all three rounds against
Oakville sophomore Tyler Updike (19-11), but Flint still won by major decision
with a score of 10-1. Guilliams battled Northwest senior Cannon Newhouse (34-3)
in the 152-pound district championship match that didn’t last longer than two
periods. Newhouse was able to pin Guilliams 55 seconds after the first period
for Flint to finish as the runner-up.

Like his older brother Garner and Parker, Griffin Horman
received a bye in the quarterfinal round before taking on Poplar Bluff freshman
Logan Hite in the semifinals. Horman pinned Hite at the end of the second
period to advance to the 170-pound title bout.

Horman took on another underclassmen in Seckman freshman
Jayden Ashlock (32-6) as the title match went all three periods. Horman only
fell two points shy of claiming his first district championship as Ashlock won
via a 10-8 decision.

There were only three other wrestlers in Landon Vassalli’s
weight class at 106 pounds as he fell to Poplar Bluff junior Gatlin Taylor
(36-3) 9-6 in the semifinals. Vassalli had no problem winning third place,
though, as he pinned Lindbergh freshman Devin Duchek (19-15) in under one
minute at 52 seconds.

Tony Terry received a bye in the first round before falling
to eventual runner-up in Northwest sophomore Chase Viehland (30-6) by a score
of 8-4. To earn a podium spot, Terry beat Lindbergh junior Elijah Wheaton
(18-9) in the consolation semifinals.

In the finals, Terry was
defeated by Oakville freshman Ethan Venable (23-3) at 3-1 in sudden victory for
third place at 220 pounds.