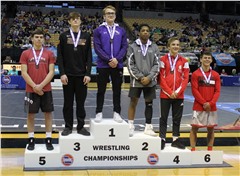 It was a historical finish for the Jackson wrestling team at  this year’s Class 4 State Championship Meet, where the Indians finished in the top 15 for the first time in four years (10th in 2014).

Jackson finished in a three-way tie for 12th place at 42 points with Blue Springs and Timberland, but four Indians were able to come away with all-state medals, which hasn’t happened since 2005.

Each Indian that earned all-state ended up competing for fifth place in their respective weight class, and only one of them was able to come away victorious.

Jackson 145-pound sophomore Garner Horman (43-6) was able to take fifth on the podium with a 5-0 decision over Fort Osage senior AJ Sanchez (46-12). In the championship quarterfinals, Horman fell to Sanchez 6-3 in a tiebreaker.

“That’s wrestling,” Coach Wachter said. “You have to really get your mind set every time you go out. Not everyone here is beatable, but you can beat that individual even though you might have lost to him the day before.

“He also beat [Northwest senior Austin Akins] who beat him earlier this year in the Tiger Classic. Every day is a new day when you’re a wrestler — you have to get yourself prepared.”

Horman started the tournament against a fellow sophomore in Nixa’s Kolyn Eli (43-15) and came away with a 10-5 win to then face Sanchez in the quarterfinals. This is where he suffered his first loss at the meet but then won two in-a-row to earn all-state for the first time in his career.

The quarterfinal loss sent Horman to the second round of wrestlebacks, where he faced Akins (35-12) and pinned the senior two minutes, 29 seconds into the bout.

Horman continued to prove in the third round of wrestlebacks, also known as the bubble round, that no one was going to stop him from a podium finish. It only took him 46 seconds to pin his opponent Jeff City junior Will Kuster (36-8) to reach the consolation semifinals.

One of the Indians other all-state finishers was 120-pound junior Alec Bailey (38-9), who was able to take sixth once again after doing so at 106 last year. This makes Bailey the 17th wrestler in program history to garner multiple all-state honors.

“That’s very outstanding [for Bailey],” Wachter said. “Alec’s wrestled very consistently all year long, and he has really come on right here at the end and wrestled really, really well.”

To start the meet, Bailey took on Ozark sophomore Clayton Moison (34-15) and came away with an 8-2 win to reach the quarterfinals.

The quarterfinals is where Bailey faced his eventual fifth-place opponent in Francis Howell junior Josh Kyle (36-3). Bailey only fell to Kyle by two points in the championship round 5-3 to send the Indian to the consolation side of the bracket.

Like Horman, Bailey came away with two dominant performances to finish as one of the top six wrestlers in his weight class. In the second round of wrestlebacks, Bailey pinned Seckman freshman Keagen Miller (34-12) 2:25 into the match.

Bailey did not pin his next opponent in the bubble round to reach state, but the returning all-stater nearly came away with a technical fall by defeating Carthage junior Tanner Russow (37-18) with a 15-2 major decision.

That would be Bailey’s final win of the meet as he fell to Park Hill freshman Kal Miller (28-6) 11-0 in the consolation semifinals and finally 11-6 in a rematch with Kyle for fifth place.

Jackson’s next all-state finisher was also dealing with an illness, which was 182-pound junior Cole Amelunke (37-7). He was the only Indian to fall in the opening round.

In the first round, Amelunke faced Park Hill South junior Cameron Gillespie (43-8) and lost by four points at 8-4 to force him to wrestle once more Thursday night.

Amelunke wasn’t going to let the opening day of the meet be his last, so in the first round of wrestlebacks he pinned Jeff City sophomore Brant Aulber (19-21) with 52 seconds left in the match.

On day two in the second round of the consolation bracket, Amelunke took on Belton senior Jack Goin (40-10) in a match that went into overtime. Amelunke was able to come away with the win by two points at 9-7.

This put Amelunke in the bubble round, where he was able to pin Parkway South junior Max Rinklin’s (38-8) shoulders to the mat with 30 seconds left in the second period to finish his season on the podium for the first time.

“[Amelunke] picked up one of these viruses going around, so he’s really had a hard time breathing throughout this whole tournament,” Coach Wachter said. “He really did a great job — he fought through the sickness and battled through his competition. I was really proud of him — he had to fight pretty hard this weekend.”

Amelunke only fell to Liberty junior Jackson White (37-13) 3-2 in the consolation semifinals, who ended up placing fourth by dropping his match in the third-place bout in a 2-1 ultimate tie breaker.

Darrah defeated Amelunke for the district title 4-3 and was able to pin Amelunke this time with 30 seconds left in the match to take fifth.

The final all-state finisher for Jackson was 106-pound junior Riley Wiseman, who was able to take sixth after falling in the quarterfinals like Bailey and Horman did.

After falling to eventual third-place finisher De Smet sophomore Colton King (35-4) 12-3 in the quarterfinals, Wiseman won his next two matches by decision (5-0, 8-4) to claim one of the last four spots on the podium.

Wiseman fell 3-1 in the semifinals to Blue Springs sophomore Cayden Dotson (45-8) and finally 3-2 in the fifth-place match, which also happened to be a rematch of a district title bout.

Wiseman faced Seckman sophomore Devin Haag (37-12) for fifth place, who defeated Riley for the C4D1 title 5-1. The fifth-place match went into overtime as Haag was able to come away victorious once again 3-2.

“We for sure wanted to get [Wiseman] up here, but then he wrestled well at districts and wrestled tough here,” Wachter said. “We are just very proud of him that he finished on the [podium]. I think it will be a real positive thing for his confidence.”

Jackson sent five wrestlers to state this year, and the only one to come away without a podium finish was two-time state qualifier senior Braden Vaugier (41-7).

Vaugier won his first round match over Jeff City junior Sam Rackers (36-11) in a 3-1 sudden victory, but lost in the quarterfinals to second-place finisher Staley junior Aidan Johnson (29-5) 7-3. He then fell 8-2 in the second round of wrestlebacks.

“He wrestled very tough, too,” Wachter said. “He fell just a little bit short, and it wasn’t by lack of effort or courage.”