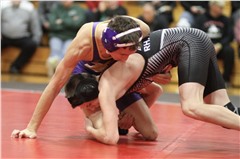 The Jackson wrestling team took second place once again behind tournament champions Northwest with a score of 310 to 348.5 at this year’s annual Tiger Classic held on Friday and Saturday.

“I thought we wrestled hard for being as young as we were, but we have a lot of growing to do and this tournament kind of showed us that,” Jackson head coach Steve Wacther said. “[This tournament not only prepared us] for, of course, our conference, but definitely for our district.”

Coach Wachter said five other teams in Class 4 District 1 are just as good or better than Northwest, including Seckman and Christian Brothers College. All three of these teams placed in the top 10 at state last year with CBC taking second overall.

Four Indians advanced all the way to the first-place match of their respective brackets, with sophomores Alec Bailey (17-1) and Rhett Wiseman (18-0) coming away with gold.

Even though Bailey, 113 pounds, and Wiseman, 106 pounds, earned first place, head coach Steve Wachter said they each failed to “open up” the final match, meaning they were trying not to lose instead of attempting to win.

“[They needed to] wrestle with a little more confidence and show them what they can do,” Coach Wachter said. “They both work really hard. They are both really good wrestlers, and they are going to have to open that up when they get into district play if they want to go to the state championships.”

Wiseman received two forfeits to start the tournament, not having to wrestle until round three when he faced Northwest’s Kody Kretzer.

Wiseman won the match handedly via technical fall at 16-1, moving on to the quarterfinal round where he pinned Sikeston’s Eddie Foster with five seconds left in the first period.

Wiseman faced SEMO Conference wrestler Bryston Pemberton out of Dexter, which lasted all three periods, too. Wiseman came out victorious at 4-1 to win his second tournament title.

Much like Wiseman, Bailey received multiple forfeits to start the tournament, not having to wrestle until the semifinal round against Cape Central’s Ryan Criddle.

Bailey defeated Criddle by technical fall, 20-5, to move onto the first-place match against Northwest’s Carter Wilhelm.

Bailey and Wilhelm went all three rounds to determine the 113-pound champion, with Bailey edging Wilhelm by decision at 2-0.

The two other wrestlers that advanced to championship matches for Jackson but failed to win were senior Jacob Dudley (15-3) at 160 pounds and sophomore Noah Uhrhan (13-5) at 145 pounds.

“Uhrhan wrestled really well,” Coach Wachter said. “The kid he had in the finals [Francis Howell North’s Dillon Lauer] is a state qualifier. Jacob Dudley wrestled a kid from Northwest, [Caleb] Camacho, and he’s also a state qualifier. He’s been around for a while, and he’s a really good wrestler, too. We wrestled with [Camacho] pretty well, and I was proud of both of them.”

Northwest’s Camacho has only lost one match this season, standing at 20-1 overall, and he only defeated Dudley by three points at 10-7 in the 160-pound championship.

To get the first-place match, Dudley wrestled in a total of four matches while only receiving one forfeit in the second round.

Dudley defeated Matt Kadlec out of Marquette by technical fall at 16-0 to start the tournament, and then pinned Poplar Bluff’s Xavier Bartlett in round three 38 seconds into the match to reach the quarterfinals.

To start his tournament in the 145-pound bracket, Uhrhan received forfeits in rounds one and two. He won his first match by pinfall in round three over Northwest’s Tyler Green.

Uhrhan received a bye in the quarterfinals and faced Carterville’s Kaleb Ward in the semifinals to determine who would advance to the first-place match.

Uhrhan defeated Ward by decision at 9-5 to face an undefeated Lauer (6-0) for the title. Uhrhan was pinned by Lauer with 25 seconds left in the second period.

Four Indians placed third overall in the classic, starting with freshman Garner Horman (18-1) at 132, who lost his first match of the season in the semifinals to eventual tournament champion in Christian County’s Jakerion Merritt (13-1) at 6-2.

Junior Braden Vaugier (17-2) also placed third for Jackson at 138 pounds, who won rounds two, three and the quarterfinals by pinfall before falling to Northwest’s Austin Akins (16-6) at 4-2.

At 170 pounds, junior Justin Singleton (16-3), who placed third in the bracket, fell to eventual tournament champion in Marquette’s Jaylen Gayfield (6-0) by pinfall with 42 seconds left in period number two.

The final third-place finisher was sophomore Cole Amelunke (15-4), who has officially moved down from 195 pounds to 182. Amelunke only lost to second-place finisher Diion Leavell out of Christian County by one point at 5-4 in the semifinals.

“One of the keys to making it to the state meet at districts is being able to come back,” Coach Wachter said. “If you lose in the semis, you come back from a loss and try to win that bubble match. The big key to have a shot of winning the conference title will be the kids who lose in the semis to come back and wrestle for that third and fourth spot.”

Jackson will only wrestle once more this month in the Kinloch Tournament on Dec. 29 and 30, and Wachter knows his team will have to make a level jump to win a second-straight conference title and advance to state.

Jackson extended its dual record to 8-0 last week, which put Coach Wachter ahead of former Farmington head coach Mark Krause for most dual wins by any coach in the SEMO Conference at 200.

“I know I’m the head coach, but I always say staff because no one person does anything,” Wachter said. “Usually if you do anything successful, you had a little to do with it and others have a whole lot to do with it. I’ve always had great assistants, but Jerry Golden is the backbone of our program. We couldn’t have done anything without him being right by me.”