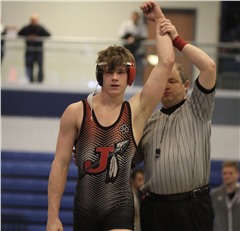 Along with a total score of 127.5 points, five Indians were able to place in the top four of their respective weight class to qualify for this year’s state meet held at Mizzou Arena in Columbia.

Four of these wrestlers have qualified for state before, but one of them became a first-time state qualifier in junior Riley Wiseman (35-6).

The 106-pounder Wiseman received a bye in round one but defeated Northwest sophomore Kody Kretzer (23-19) 10-2 in the quarterfinals. Wiseman picked up an 8-4 win in the semifinals over Fox sophomore Daniel Bauer (28-19) to reach the district title match, where he faced Seckman sophomore Devin Haag (33-10) for gold.

Haag was able to defeat Wiseman 5-1 to become one of Seckman’s three district champions as the Jaguars finished one spot ahead of Jackson in the final standings at third with 164.5 points.

Next to qualify for state was Jackson’s only all-state finisher junior 120-pounder Alec Bailey (35-6), who was also able to reach his district championship bout.

Like Wiseman, Bailey received a bye in the opening round but won his next two matches in dominant fashion to reach the finals.

In the quarterfinals, Bailey pinned Kirkwood junior Aidan Walker (8-18) with 40 seconds left in the first period. Bailey then faced CBC freshman Keagen Miller (33-10) in the semifinals, coming away with a 9-1 major decision victory to qualify for state.

For the 120-pound district title, Bailey faced a two-time all-state finisher in Lafayette senior Jayden Carson, who was able to defeat Alec 10-1 to win the gold.

Lafayette took second in the meet four points ahead of Seckman with 168.5 points and finished with another district champion, junior 113-pounder Jalin Reese.

The only underclassmen for Jackson to qualify for state was sophomore 145-pounder Garner Horman (39-4), who ended up facing CBC’s two-time all-state senior Kyle Prewitt (34-3) for the district championship.

Horman didn’t receive a single bye in the tournament, but he was able to win his first two matches with ease via pinfall.

It only took Horman 57 seconds to pin SLUH sophomore Joey Fallon (8-17) to start the tournament. Horman then faced Mehlville senior Tristin Wilder (32-14) in the quarterfinals, whom he pinned 51 seconds into the second period.

Horman took on Seckman junior Anthony Chellew (34-12) to see which wrestler advanced to the title bout. It was a match that was down to the wire, but Horman came away victorious at 7-6 to qualify for state once again.

Horman’s championship match against Prewitt would not be so close as he fell by major decision at 15-3.

Vaugier was able to punch his ticket to Mizzou Arena once again this season, but he failed to reach the title match in his weight class.

Vaugier won his first two matches via pinfall, first over Fox freshman Bryce Latimer (3-2) with five seconds left in the first period and next Northwest junior Christian Trigg (23-18) 1:04 into the quarterfinal matchup.

With state and a district title match on the line, Vaugier and Lindbergh senior Dawson Javier (35-7) wrestled all three periods. Only one wrestler scored a point as Javier came out victorious over Vaugier 1-0.

This loss sent Vaugier to the consolation semifinals with one more chance to qualify for state, and he defeated Seckman junior Gavin Moore (15-18) 7-1 to do so.

Vaugier faced Lafayette sophomore Evan Boren in the third-place match and came away with a 5-2 win for his highest finish ever at districts.

The final Indian to qualify for state was none other than junior 182-pounder Cole Amelunke (34-4), who advanced to state as a freshman when he wrestled at 195 but failed to do so last season in his current weight class.

Amelunke earned the top seed and pinned all of his opponents up until the district championship bout, where he faced CBC freshman Jack Darrah (34-6).

It only took Amelunke 20 seconds to pin his first opponent in Marquette senior Blake Fischer (9-29), but his next three matches all went into the third and final period.

Amelunke faced Lafayette senior Jemarius Jones (12-19) in the quarterfinals, coming away with a pinfall with 58 seconds left in the bout.

In the semifinals, Amelunke went up against Seckman senior Andrew Warren (27-19), who defeated the Class 4 No. 3 ranked Parkway South senior Max Rinklin (36-6) 3-2 in the quarterfinals. Amelunke pinned Warren with 26 seconds left in the third period to reach his first district title match.

The 182-pound district title match between Amelunke and Darrah was only decided by one point with the CBC freshman coming away victorious 4-3 for Cole to finish second overall.

Four other Indians were only one win away from punching their own ticket to state, but they each fell short in the consolation semifinals.

Fellow junior and 126-pounder Grady Livingston’s (28-8) two losses in the tournament both came to Lafayette senior Desean Reese (24-15), first in the quarterfinals 5-2 and finally 3-2 in the consolation semis.