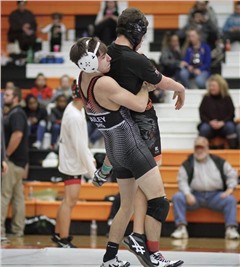 Just two weeks before the start of the Class 4 District 1 Tournament, the Jackson wrestling team traveled to Saint Charles to compete in this year’s Kyle Thrasher Tournament.

The tournament included a total of 36 schools, 10 from Jackson’s district as the Indians took 10th overall with a score of 84.

Not a single Indian reached a championship match in the tournament, but five did manage to place in the top eight.

The first was sophomore Alec Bailey, who wrestled at 106 pounds to finish fourth overall, the highest place for Jackson in the tournament.

Bailey’s first loss of the tournament came in the semifinals to eventual 106-pound champion Eric Lovelace out of Dexter by pinfall.

In the consolation semifinals, Bailey defeated Rock Bridge’s Evan Diehls in a 7-6 tiebreaker before facing freshman James Homfeld out of Lindbergh for third place. Bailey fell to Homfeld by decision at 2-0.

Next was freshman Garner Horman, who took sixth overall in the 132-pound bracket as he fell to eventual champion, Parkway South junior Garret Kloeppel by technical fall at 15-0 in the semifinals.

Horman lost his final two matches in the consolation bracket, starting against Battle senior Andrew Shea as Horman was injured in the match. Horman had to forfeit his next match as well for Belleville East senior Justin Sanders to take fifth place.

Junior Braden Vaugier took the eighth and final spot in the 138-pound bracket as he fell to Staley junior Blake Berryman by a 3-0 decision in the quarterfinals.

Vaugier won his next match by defeating Holt junior Will Chambers by major decision at 11-0 before losing to Lindbergh junior Andrew Javier by only one point in a 5-4 decision. Vaugier forfeited his next match to Lee Summit West junior Morgan Potts in the seventh-place bout.

At 170 pounds, junior Justin Singleton placed sixth, first having fallen to eventual tournament champion in undefeated Hickman senior Jeremiah Kent by pinfall in the first period in the quarterfinal round.

Singleton won his next two matches as he defeated Lee Summit West sophomore Thomas Brown by major decision at 14-6 and then received a bye to advance to the consolation semifinals.

Lastly, placing in the top eight for Jackson was sophomore Cole Amelunke at 182 pounds. Amelunke’s first loss of the tournament like many of his teammates came against the tournament champion, which was Northwest sophomore Chase Stegall.

The match between Amelunke and Stegall in the quarterfinals went all three rounds with Stegall coming out on top 6-3. Amelunke won his first match in the consolation round over Hickman senior Kayden Lewis by an 8-0 major decision, but then fell to Parkway South junior Ty Osby by a 3-1 tiebreaker.

This loss placed Amelunke in the seventh-place match against Hazelwood West senior Christia Brinkley, who Amelunke pinned 11 seconds into the third and final period.

The Class 4 District 1 Tournament begins on Feb. 9 and will be hosted by Lindbergh.

Five wrestlers placed in the top four of last year’s district meet to qualify for the Class 4 State Championship, with one being Amelunke, who did so at 195 pounds as a freshman.