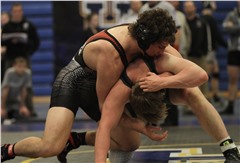 After six Jackson wrestlers qualified for state in last year’s Class 4 District 1 Meet, the Indians are hopeful they can send just as many back to Mizzou Arena this season.

Jackson head coach Steve Wachter holds this district tournament as arguably the best in the state, and rightfully so.

Only one of those returning all-state placers is from Jackson in junior Alec Bailey, who did so last season at 106 pounds and took sixth. Bailey (33-5) has moved to the 120-pound weight class this season and was able to win his third-straight conference championship last month.

Bailey was one of the five Indians to place in the top four at the annual Kyle Thrasher Tournament, which featured eight other teams from Class 4 District 1.

Jackson placed sixth in the tournament with 125 points and second out of the nine district teams behind third-place Lafayette at 161.5. The Indians were without 113-pound junior Rhett Wiseman, who was resting an injury.

Wiseman’s twin brother Riley was able to place fourth in the 106-pound bracket, who is also ranked fourth in Class 4. Coach Wachter thinks Wiseman could not only qualify for state but also earn all-state honors.

“If [Riley] wrestles like he’s capable of, he has a very good shot of going to the state championships — there’s no doubt about it,” Wachter said. “To be honest, he not only has a chance to go to state, but he has a shot of placing at state if he wrestles like we know he can. There’s a lot of pressure — you have to learn how to handle it, so you have to have a good mindset when you enter districts and state.”

Standing in Rhett’s way of returning to state will be ranked wrestlers such as Lindbergh sophomore James Homfeld (31-1), who is currently ranked fourth and placed fourth in last year’s 106-pound class at state. Another ranked wrestler Rhett could see is No. 4 Lafayette junior Jalin Reese (21-5) and finally unranked Northwest junior Carter Wilhelm (27-9).

All three wrestled at the Thrasher tournament as Homfeld placed second, Reese fourth and Wilhelm eighth.

At 120 pounds, Bailey took fourth overall as he fell to Francis Howell’s Josh Kyle (27-1) by a 4-2 decision in the third-place match. Bailey also lost to Kyle in the quarterfinals at 1-0.

Bailey is currently one of the two honorable mentions in the 120-pound Class 4 rankings as district opponent Lafayette senior Jayden Carson (26-3) is ranked second. Carson is a two-time all-state finisher and placed second in the Thrasher tourney.

Joining these wrestlers at 120 pounds is Seckman junior Skyler Akers, who won last year’s 106-pound district championship and went on to place third at state. Akers is ranked fifth overall.

The rest of the Indians who placed in the top four at the Thrasher tournament were all able to win their third-place match, starting with 145-pound sophomore Garner Horman (36-3).

Horman did so by pinning Holt’s Will Chambers (21-11) 33 seconds into the second period of the third-place match. He fell to Jefferson City’s Will Kuster (26-4) in the semifinals at 6-2.

Horman is currently unranked in his weight class, but he reached last year’s state meet at 132 pounds by taking third in districts.

In Horman’s weight class is none other than CBC junior Joshua Saunders, who won the 132-pound Class 4 State Championship back-to-back before making the move to 145 this season. Saunders is the top-ranked 145-pound wrestler in Missouri and is ranked seventh nationally.

The other ranked wrestler in this weight class from C4D1 is Seckman junior Anthony Chellew, who is two spots behind Saunders.

Senior Braden Vaugier was the next Jackson wrestler to take third place as he did so in the 152-pound weight class, placing behind district opponent Lindbergh senior Dawson Javier, who finished second.

Vaugier, who is ranked sixth in Class 4, fell to Lafayette’s Evan Boren in an ultimate tie breaker in the quarterfinal round. Vaugier defeated Alton’s Pierre Evans 3-1 to take third.

Vaugier qualified for state at 138 pounds last season by pinning Akins, but he fell to eventual district champion CBC senior Kyle Prewitt in the semifinals 7-0. Prewitt is a two-time all-state finisher and ranks second in Class 4.

The final third-place winner for Jackson was 182-pound junior Cole Amelunke, who is currently ranked fourth overall in Class 4 after failing to qualify for last year’s state meet. However, Amelunke did qualify for state as a freshman at 195.

In the Thrasher tourney, Amelunke fell to Staley’s Rocky Elam (32-1) 7-2 in the semifinals but defeated Whitfield’s Ethan Hovis 1-0 in the third-place bout. Elam is the No. 1 ranked 182-pounder in Missouri and 10th nationally.

The thing Wachter noticed that his wrestlers can improve on is technique because as far as conditioning goes, these Indians can last with anyone.

“Our conditioning is in good shape, but technically we needed to be in better positions on a couple of things,” Wachter said. “There’s also something that’s pretty hard to work on at this point in the game, and that’s strength. We put in a great spring, summer and fall, and we kept working on our strength throughout the winter, but there are just some people who are awfully strong.”

Wachter will have his team continue focusing on technique more so than strength at this point in order to counteract the type of strength his wrestlers will come across at districts and state.

The other returning state champion in this district tournament will be Seckman senior Kai Orine, who won the 120-pound state title last year and the 113-pound title as a sophomore.

Orine is wrestling at 126 pounds this season, the same weight class as Jackson junior Grady Livingston (26-6). The two will be joined by Marquette senior Jack Lenox, who is listed as honorable mention at 126 pounds but is a two-time all-state finisher.

Two other weight classes include state runner-ups, starting at 132 pounds with CBC sophomore Vincent Zerban, who is ranked No. 1 in Class 4. Zerban fell to Orine in last year’s state title match. Wrestling at 132 pounds for Jackson is junior Anthony Aguirrie (24-13).

The final state runner-up returning to wrestle is this year’s district meet is Parkway South senior Garrett Kloeppel, who fell to Saunders in last year’s 132-pound title bout. Kloeppel was also the state runner-up as a sophomore at 126 pounds.

Kloeppel now wrestles at 138 pounds and is ranked No. 2 in Class 4 behind CBC sophomore Wyatt Henson. Wrestling at 138 pounds for Jackson is senior Dawson Tyler (16-15).

Jackson placed sixth overall at last year’s district meet, but Coach Wachter believes the fourth spot is open for the taking behind CBC, Seckman and Lafayette.

“Several teams such as Lindbergh, Northwest, Eureka and us could be in a dog fight for [fourth],” Coach Wachter said.