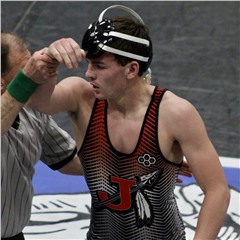 For the second year in a row, the Jackson wrestling team was able to place in the top 12 of the Class 4 State Wrestling Tournament as three Indians finished in the top six of their weight class to earn all-state honors and took 11th overall as a team.

Jackson finished with a total of 47 points, five more than last year, as the team managed to have two wrestlers compete for third place, which no Indian has done since 2016. Those wrestlers to compete for third was senior Cole Amelunke (41-4) in the 195-pound weight class and junior Garner Horman (40-4) at 152 pounds.

The Indians final wrestler to garner all-state honors was none other than senior Alec Bailey (42-11), who took sixth place at 126 pounds to become the fifth wrestler in Jackson history to earn all-state honors three times in their career. Bailey joins the likes of Brock Howard, Levi Rayburn, Cody Rouse and Joe Wiseman to have done so.

Amelunke and Horman became the 18th and 19th Indians in program history to earn all-state multiple times,  and they each fell to wrestlers that went on to compete for an individual state title.

Horman was one of the two wrestlers for Jackson to reach the semifinals in this year’s state meet as he won his first two matches by pinfall. In round one, Horman first pinned Blue Springs junior Deandre Thomas (24-9) with one minute and 10 seconds left in the match.

Horman made quicker work of Jefferson City senior William Kuster (34-6) in the quarterfinal round as Horman pinned him with only 13 seconds left in the first period. Along with advancing to the semifinals, this win also guaranteed Horman an all-state finish.

Horman’s hopes of competing for a state championship this season came to an end against Park Hill junior Grayston Diblasi (36-7), who was able to pin Horman with 46 seconds remaining in the first period. Diblasi went on to face Waynesville senior Gaven Sax (43-1) for the 152-pound state championship as Sax came away with a 6-1 win over the junior.

Horman’s loss in the semifinals pushed him to the consolation semis, where he faced Hold senior Nathan Undertajlo (39-14). This match lasted all three periods as Horman did not allow Undertajlo to score a point and won 7-0.

For third place at 152 pounds, Horman faced off against Seckman senior Anthony Chellew (41-6) with the match not going past the second period since Horman was able to pin Chellew at the two-minute, 46-second mark.

Amelunke’s path to his third-place bout was a little more difficult since his first loss of the state tournament came in the quarterfinals instead of the semis. In Amelunke’s first match at state, he won handedly over Francis Howell senior Cole Litteken (28-15) by major decision at 17-4.

Amelunke was tasked with facing arguably the best wrestler at this year’s state championship meet in Staley senior Rocky Elam (32-0) for his quarterfinal matchup. According to InterMat’s high school rankings, Elam is the No. 1 195-pound wrestler in the nation and has already committed to Mizzou.

Amelunke’s loss to Elam sent him to round two of the consolation side of the bracket, where he faced Jefferson City senior Dawson Prenger (30-16). Amelunke pinned Prenger with one minute and nine seconds left in the third period.

Amelunke’s next match was win or go home in the third round of consolation as he took on Lee’s Summit North junior Aaron Barnhill (36-10). Amelunke won the match in overtime 5-2 to earn a spot in the top six of his weight class.

For third place at 195 pounds, Amelunke took on Liberty senior Zeke Beach (23-4) in another match that was decided by less than three points. Beach was able to defeat Amelunke 3-1 for the Jackson senior to finish his career at fourth place on the state podium.

The only other Indian besides Horman to advance to the semifinals was Bailey, who started state by pinning Battle senior Jackson Shea (27-8) with only 26 seconds left in the second period of the first round.

In the quarterfinals, Bailey defeated Francis Howell senior Josh Kyle (43-6) by decision at 6-3 to advance to the championship semis for the first time in his career. This win also solidified Bailey a spot on the podium for a historic third time.

Bailey faced Blue Springs junior Korbin Sheperd (42-2) in the semifinal round to determine which wrestler would compete for the Class 4 126-pound state title. Bailey came away scoreless as Sheperd advanced with a 4-0 win.

For the state championship, Sheperd fell to Staley senior Khyler Brewer (44-4) by sudden victory at 3-1. In a tiebreaker in the consolation semifinals, Bailey fell to Ozark freshman Braxton Strick (48-7) 2-1.

In the final match of Bailey’s high school wrestling career at Jackson, he faced Josh Kyle once again for fifth place. This match was also decided by less than three points as Kyle was able to defeat Bailey 3-1.