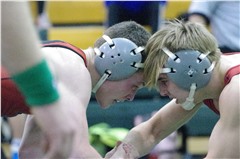 Coming off a one week break from competition, the Jackson wrestling team traveled to Ste. Genevieve High School for a quad meet to face Ste. Genevieve, Sikeston and Windsor.

Six of Jackson’s wrestlers won all three of their matches with only two of those wrestlers receiving one forfeit a piece in the meet.

To start the meet in round one, Jackson faced off against last year’s third place team in the SEMO Conference Tournament, Sikeston.

It was the 106-pound bout to start the dual meet with Jackson’s freshman Alec Bailey wrestling Sikeston’s Josh Rihston.

Neither of these wrestlers were in the SEMO Conference Tournament last year, but that did not stop the match from going all three periods for Bailey to get his first win of the night at 5-0.

With sophomore Jeston Dewrock receiving a forfeit in his first match of the night for Jackson, the next match was between freshman Grady Livingston and Sikeston’s David Valdez at 120 pounds.

This match also went all three rounds, but this time in favor of Sikeston with Valdez coming out on top by major decision at 16-5.

Last year’s runner-up in the 120-pound weight class in the conference tournament, senior Gus Guilliams, who has only lost one match this season at 126, pinned Sikeston’s Nathan Bandhan with only 48 seconds having passed in the  bout.

Vaugier pinned Sikeston’s Colton Gaddis with just 25 seconds left in the first period of the match to start his night.

At 138 pounds, Jackson senior Zach Flath, who  earned first place in last year’s J.V. Conference Tournament at 132 pounds, also pinned his opponent within the first period with 47 seconds left in the round.

In the next match in 145- pound weight class, junior Cole Welker faced a familiar opponent in Sikeston’s Justus Faulkner. These two met on the gridiron in the fall when Jackson defeated Sikeston 42-7.
On the mat, Faulkner was able to get revenge for Sikeston and defeated Welker in three periods at 6-3.

Senior Payne Guilliams is the only returning wrestler for Jackson to be crowned a champion at last year’s SEMO Conference Tournament, winning the 138-pound weight class.

In Payne’s first match, he continued the pinning streak for Jackson by bringing down Sikeston’s Sean Blauchfield’s shoulders to the mat for a pin 36 seconds into the match.

The next match between Jackson and Sikeston did not end in the first period or by pinfall with junior Jacob Dudley and Sikeston’s Luke Blanton taking the 160-pound match into overtime.

At 182, Jackson did not have a wrestler compete against last year’s SEMO Conference runner-up at 182 pounds, Sikeston’s Joshua Stinnett, who lost to Jackson’s former All-State wrestler Carson McCord in the tournament.

Freshman Cole Amelunke at 195 was the next wrestler up for Jackson where he faced Sikeston’s Jordan Wheatley and defeated him 2-1.

Senior Bryce Dickerson, who missed most of last season due to injury but still managed to be a state qualifier, defeated Sikeston’s Landon Griggs 10-4 in the 220-pound match.

Filling in for junior Owen Leible, who is currently out with an injury, was sophomore Braxton Green.

Green’s match against Sikeston’s Zach Watkins went to overtime, and it took two sudden deaths for Watkins to get a point on Green to earn the victory.

After winning handedly over Sikeston, Jackson went on to face Windsor in round two of the meet.

The Owls placed seventh out of 12 in last year’s SEMO Conference Tournament with two of their wrestlers reaching the championship round with one of them coming out on top.

Bailey received a forfeit at 106 pounds to advance to 2-0 in the meet, and Dewrock wrestled in his first match of the night to start round two.

Dewrock faced Windsor’s Andrew Kinder, which went all three periods but ended in major decision at 11-3 in favor of Kinder.

After losing by major decision in his first match, Livingston suffered the same fate and did not score a point against Windsor’s Christian Homeier at 9-0.

Much like Bailey, Gus Guilliams also received a forfeit against Windsor. This led to Vaugier versus Windsor’s Brandon Ruegge, which ended when Vaugier scored 15 unanswered points to win by technical fall.

Flath then faced Windsor’s Grant Pauli in the 138-pound bout, and the match went into the second period before Flath pinned Pauli 32 seconds into the period to advance to 2-0 in the meet.

After falling in his first match by just three points, Welker went on to win his second match at 6-0 over Windsor’s Jeremy Sandknop.

The next match featured two 2015-16 SEMO Conference Champions between Payne Guilliams and Jacob Warren, who also placed fourth All-State in the 145-pound weight class last year. This is the first time a match has went all three periods for Payne since the championship round of the Lindbergh Tournament on Dec. 28.

Going all three periods, Warren came out on top over Guilliams, winning by a score of 5-3 to hand Payne only his second loss of the season.

Next up was the 160-pound match, and with Dudley losing his first match of the night in overtime at 3-2, he managed to defeat Windsor’s Connor Richey by major decision at 5-0.

Singleton continued his winning streak in the meet by pinning Windsor’s Dustin Svoboda with 29 seconds remaining in the second period.

Even though Jackson did not have one of its wrestlers compete at 182 against Sikeston, senior Aiden Dale made his season debut and defeated Grant Hogan by major decision at 10-0.

Amelunke faced the other wrestler for Windsor who made it to one of the championship matches of last year’s conference tournament, which was Ryan Yarnell.

Much like Amelunke’s first match, this 195-pound bout also went the entire three periods, but Cole only managed to score one point against Yarnell and lost by major decision at 10-1.

Dickerson’s second match only lasted 39 seconds after he pinned Windsor’s Andrew Marler. Green received a forfeit to win his first match of the night.

After Jackson’s second win of the night, the team then faced meet-host Ste. Genevieve with Livingston starting the action against David McNeal at 120.

Livingston fell to McNeal by major decision at 14-2 to be the only wrestler for Jackson to fail to win a match in the meet.

Next up was Gus Guilliams who faced Ste. Genevieve’s Clay Stafford, which ended before one minute passed when Guilliams pinned Stafford with 1:03 left in the first period. Guilliams was the first of six wrestlers for Jackson to go 3-0 in the meet.

At 132, Vaugier followed Gus’ path to be the second Jackson wrestler to go 3-0 after defeating Grant Staffen 1-0.

Shortly after that match, Flath became the third Indian to go 3-0 by pinning Matthew Pirkle in the first 47 seconds of the match at 138.

Welker, who entered his final match at 1-1, was pinned by Ste. Genevieve’s Jared Hambolt with 17 seconds left in the first period.

After losing only his second match of the season, Payne Guilliams pinned his final opponent of the night 55 seconds into the second period to finish 2-1 in the meet.

Dudley’s final match of the meet in the 160-pound weight class ended rather quickly when he pinned Josh Schmidt in 15 seconds.

No one wrestled at 170 pounds for Jackson because Singleton moved up to 182 for his final bout where he faced Tyler Jenkins and came out on top 1-0.

Amelunke’s final match at 195 pounds was against Wade Hahn, who placed sixth All State last season, which ended in a 7-4 win for Hahn.

The 106 match went all three periods for Bailey to come out on top over Dickens 6-2 to be the first of six for Jackson to go 3-0 in the meet.

The final match did not go so well for Jackson with Dewrock being pinned 33 seconds into the first period.