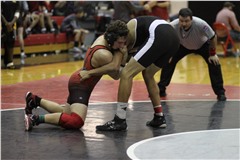 The Jackson wrestling team (6-0) hosted two meets last week back-to-back on Thursday and Friday, and the Indians came out undefeated at 4-0.

On Thursday, Jackson faced off against SEMO Conference opponents Dexter and Kennett, winning 51-17 and 79-0 respectively.

Out of the 14 weight classes, Kennett failed to fill eight spots allowing for the Indians to receive forfeits in those matches.

In the six matches wrestled, four of them were decided by pinfall in Jackson’s favor as junior Justin Singleton (10-2) recorded the quickest pin at 35 seconds at 182 pounds.

Singleton lost his second match of the season later that night by major decision (10-2) to Dexter’s Jeff Featherston.

Freshman Garner Horman (12-0) continued his undefeated season at 132 pounds against Kennett by recording the second-fastest pin for Jackson at 47 seconds over Ronaldo Guerrero.

Horman was not able to pin his second opponent of the meet in Dexter’s Wyatt Parker, but was victorious via technical fall with only 20 seconds remaining in the match.

Jackson’s only other undefeated wrestler, 106-pound sophomore Rhett Wiseman (12-0), received a forfeit against Kennett and then pinned Dexter’s C.J. Greene 32 seconds into the second period.

Junior Braden Vaugier (11-1) at 138 pounds won both of his matches against Dexter and Kennett, the first by pinfall with one minute, 15 seconds left in the second period over Kennett’s Darrell Malone. Vaugier won his final match of the night against Dexter’s Mason Keena by decison at 7-0.

Both matches for senior Owen Leible (8-2) at 285 pounds ended in pinfall.

Leible pinned his first opponent in Kennett’s Treyvon Lemons with one second left in the match. Leible was then pinned by Dexter’s Christian Yarber with nine seconds remaining in the second period.

This proved to be succesfull for each wrestler as Dudley is now on an eight-match win streak by defeating SLUH’s John Murphy 2-0 and then Mehlville’s Chase Poucher by major decision at 9-0.

Singleton won his first match of the meet by pinning SLUH’s Sam Nielder with 43 seconds left in the second period. He finished his night with another pinfall over Mehlville’s Jacobi Shelton 47 seconds into the second period.

Amelunke also recorded two pins to finish his week, the first over SLUH’s Max Nieder as Amelunke only needed 22 seconds to do so.

Amelunke’s next pinfall did not come until the third period of his final match agianst Steven Haverstick of Mehlville with 59 seconds left in the match.

Jackson hosted one more meet yesterday where the Indians faced off agaisnt De Soto and Potosi before the start of the annual Tiger Classic Friday. The Indians placed second in last year’s tournament behind Northwest.