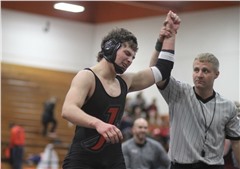 For the first time in three years, Jackson’s wrestling team was able to take the top spot in the annual Cape Central Tiger Classic.

Jackson scored a total of 335.5 points to take this year’s tournament championship, which was 68.5 points better than second-place Christian County.

The Indians had a total of seven wrestlers advance to championship matches in their respective weight class and a total of five came away with gold around their necks.

Jackson also had a total of four wrestlers come back after losing in the quarterfinals or semifinals to take third place, making for a total of 11 Indians placing in the top three in the tournament.

On day one, Wiseman received byes in rounds one and two before pinning Sikeston’s Trey Scott with 47 seconds left in the second period. He then pinned his next two opponents on day two to reach the first-place match.

Wiseman’s championship match with Francis Howell North’s Mason Apple (8-3) lasted all three periods, but Wiseman was able to win by decision with a 3-0 shutout.

Fellow junior Alec Bailey (10-2) was the next Indian to win first place, who won his total of four matches with two pinfalls, one technical fall and finally by decision to claim the gold.

Bailey faced Northwest’s Carter Wilhelm (14-4) for the 120-pound championship as the match lasted all six minutes for Bailey to take first place with a 3-0 win.

The next wrestler for Jackson to reach a first-place match was junior Grady Livingston (7-2) at 126 pounds, who fell to Park Hills Central’s undefeated Kade Willis (15-0) via pinfall.

Livingston wrestled a total of five matches at this year’s Tiger Classic since he only received one bye in round one. In round two, Livingston pinned Kennett’s Chase Malone with seven seconds left in the first period.

Livingston fell in his next match to Northwest’s JoJo Camacho by decision at 6-3, but picked up wins in his next two matches on day two.

Livingston first defeated SEMO Conference opponent Jake Lawrinenko out of Poplar Bluff 6-1 in the quarter-finals and finally Christian County’s Ethan Wells 2-1 in the semis. He earned 22 points for Jackson.

The next first-place match for the Indians was in the 145-pound weight class as sophomore Garner Horman, who entered the bout 13-0.

Horman pinned his first two opponents to start the tournament and finally won by tech fall over Christian County’s Neal Aldridge, which was Aldridge’s first loss on the year.

Horman faced Northwest’s Austin Akins (15-3) for the championship, which was a match that lasted all three periods. Akins would come out on top by two points at 6-4 to take the gold for Horman to take second place.

Jackson’s 152-pound spot is filled by none other than senior Braden Vaugier, who entered the tournament with only one blemish on his record this season.

Vaugier came away undefeated in the Tiger Classic as he won his first match by pinfall, the quarterfinal match by tech fall and then decision in the semifinals.

Even though the 152-pound title match lasted all three periods, there was no stopping Vaugier from taking first place as he defeated Francis Howell North’s Joshua Simmons by major decision at 15-1.

The Indians had to wait two more weight classes until their next championship match, which is where sophomore Cole Parker (10-3) was able to claim the gold in the 170-pound weight class.

Parker wrestled in a total of five matches, and he won every single match by pinfall. He pinned his first opponent 57 seconds into the match in round two and his next with 15 seconds left in the second period of round three.

Parker then pinned Francis Howell North’s TJ Condren 35 seconds into the second period in the quarterfinals and conference opponent in Poplar Bluff’s John Smothers 2:40 into the match to reach the championship round.

The final Tiger Classic Champion for Jackson was undefeated 182-pound junior Cole Amelunke (8-0), who won four of his five matches via pinfall.

In the quarterfinals, Amelunke then pinned Park Hills Central’s Joshua Whaley 48 seconds into the second period. His semifinal match against Northwest’s Johnny Daffron ended in the second period as well as Amelunke recorded the pin with 41 seconds left until the third.

It was a battle of the undefeated for the 182-pound title as Amelunke at 7-0 faced Christian County’s Antonio Abren, who entered the match 11-0.

This first-place match lasted all three periods but Amelunke was able to come away victorious over Abren by decision at 11-5.

Uhrhan fell to Northwest’s Darrell Spencer by a 1-point decision at 7-6. He then defeated Carterville’s Bailey Hicks in the consolations semis 5-0 and then Sikeston’s Sean Blanchfield 6-4 in sudden victory for third.

Reiminger fell in the semifinals to Cape Central’s Josh Pullen and lastly pinned McCracken County’s Logan Deasel by pinfall 1:32 into the match to take third.

Blattel was pinned by Christian County’s Niko Bussell, but Blattel then won his final two matches via pinfall included one over Poplar Bluff’s Gavyn Hays 22 seconds into the second period.

Green fell in the quarterfinal round but ultimately won by injury default over Christian County’s Markus Green to claim third in the heavyweight class.