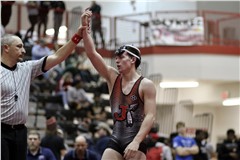 For the first time in four years, the Jackson wrestling program was able to place in the top three of the Class 4 District 1 Tournament as the Indians did so with a total of 158.5 points.

Jackson finished third overall in districts this past weekend, and the team’s overall score was only 13 points behind first place Christian Brothers College, which posted 171.5 points to win the tournament for the fourth-straight season.

Out of the 13 Indians who competed in this year’s district tournament, nine of them were able to place in the top four of their weight class to advance to the Class 4 State Championship Tournament that starts tomorrow at Mizzou Arena.

One of Jackson’s wrestlers became a first-time Class 4 District 1 Champion as junior Garner Horman, who placed second at 145 pounds last year, won the 152-pound bracket in commanding fashion. In the four matches Horman (36-3) competed in, he won each via pinfall.

Horman faced Mehlville senior Brody Valleroy (27-7) in the semifinal round, which was the only match that went into the second period of this year’s district tournament for the Jackson junior. In the second, Horman pinned Valleroy in 40 seconds to advance to his second-straight district title match.

For the 152-pound Class 4 District 1 Championship, Horman went up against Marquette senior Aiden Rudman (26-7) in a match that only lasted one minute and 58 seconds. Horman was able to pin Rudman to the mat with just two seconds left in the first period to capture the district title.

The win also sent Horman to the state meet for the third-consecutive year, where he failed to place as a freshman wrestling at 138 pounds but took fifth at 145 a season ago.

Jackson only had one other wrestler advance to a district title match Saturday, which was none other than senior Alec Bailey (40-8) at 126 pounds. Like Horman, Bailey also had a dominant road to his respective district championship bout by recording three-straight pinfalls.

Bailey’s first opponent was Vianney junior Justin Schoewalder (9-23), whom Bailey pinned with 51 seconds left in the first period. Bailey’s next match did not go past the first as well since he pinned Marquette sophomore Derrick Brown Jr. (8-13) at the 1:37 mark.

In the semifinals, Bailey faced Lafayette sophomore Andrew Doehring (32-10) in a contest that nearly lasted all three periods until Bailey was able to earn the pinfall with 39 seconds left in the match.

Bailey then faced a familiar opponent in Lindbergh junior James Homfeld (35-5) for the 126-pound district title, whom Bailey fell to 3-1 in the Kyle Thrasher Tournament Jan. 26. This match lasted all three periods as Bailey fell to Homfeld once again, but this time by a score of 4-2.

With his second-place finish, Bailey has now qualified for the state meet every season of his high school career and hopes to become the fifth wrestler in program history to garner all-state honors three times. Bailey took sixth place at 106 pounds his sophomore year, while placing in the same spot at 120 last season.

The other seven Indians who qualified for this year’s state tournament all wrestled for third place in their respective weight class. Only three of them were able to edge their opponent for the win.

Jackson’s first wrestler to take third overall was senior Riley Wiseman (42-5) at 113 pounds, whose only loss of the district tournament came against Fox junior Daniel Brauer (18-13), who fell to eventual district champion in CBC freshman Santino Robinson (31-4) in the semifinals.

Wiseman received a bye in the first round and then faced Brauer in the quartefinals in a match that lasted all three periods. Wiseman ended up losing the match by one point at 5-4 to push Wiseman to the consolation bracket.

In the second and third round of the consolation portion, Wiseman outscored his opponents by a combined total of 24-1 to advance to the semifinals, where it was win or go home.

Wiseman faced Lafayette sophomore Graham Tabor (22-12) for a trip to state on the line as Wiseman was able to come away with a 4-3 victory to qualify for state the second and final time in his career at Jackson. Wiseman had no problem winning the third-place match against Kirkwood junior Lance Brown Jr. (36-12) as Wiseman won via major decision at 14-3.

Another Jackson senior Cole Amelunke (37-2) will also try to become a two-time all-state honoree after also taking third place in the district tournament, and he did so at 195 pounds.

Amelunke was seeded second in the 195 bracket as he entered the tournament with only one loss, but he ended up falling in the semifinals to CBC senior Luke Ebers (26-11) in sudden victory at 3-1.

Amelunke won his first two matches by pinfall over Poplar Bluff sophomore Desmond Howell (17-12) at the 1:20 mark and Mehlville junior Robert Rothmeyer (18-17) with four seconds left in the second period.

After falling to Ebers in the semis, this placed Amelunke in the consolation semifinals, where he pinned Fox senior Daemion Birlew (16-10) four seconds into the third period to punch his ticket back to the state meet. In the 195-pound third-place match, Amelunke defeated Seckman senior Jacob Loughary (28-17) by decision at 7-1.

The final Indian to take third place in the district meet was sophomore Liam Bryant (30-9) at 285 pounds, who fell to Fox junior Mason Petty 9-3 in the quarterfinals. Bryant pinned his next two opponents in the second and third round of consolation, which led him to face Poplar Bluff junior Preston Taylor (25-6) in the semifinals.

Bryant and Taylor’s match lasted all three periods until Bryant was able to come out on top with a 3-1 win to qualify for state for the first time in his high school career. Bryant faced Lindbergh sophomore Matt Ludwig (27-15) for third place at 285 as Bryant pinned Ludwig 37 seconds into the second.

The final four wrestlers for Jackson to place in the top four and qualify for state was freshman Griffin Horman at 138 pounds, senior Noah Uhrhan at 160, junior Cole Parker at 182 and lastly senior David Ekstam at 220.

Horman (28-15) fell to eventual district champion in Lafayette junior Gabe Frank-enberger (33-11) by a 6-4 decision in the semis, who pinned Poplar Bluff senior Quinten Bell in 45 seconds to win the 138-pound district title.

In last year’s state meet, Jackson was able to place in the top 15 for the first time in four seasons with a score of 42 points after only having five wrestlers compete in Columbia.