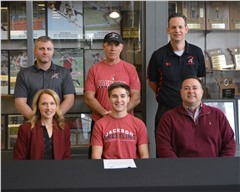 In three of his four years as a member of the Jackson wrestling team, senior Alec Bailey has been able to finish as one of the top six wrestlers in his weight class for Class 4.

Bailey took sixth place at 106 pounds in his first two trips to state, while making the move to 126 for his final campaign at Jackson, where he finished sixth overall.

The three-time all-state and three-time SEMO Conference Champion will be continuing his career at the next level as Bailey signed with Lindenwood earlier this month. This is the first time Jackson’s program has had someone sign to compete in college since Jake Byrd inked with Drury in 2016.

“Alec has had an incredible career here,” Coach Wachter said. “He’s had a lot of accomplishments, and we’re just really proud of him. The ultimate goal is if you can enjoy your sport in high school and then be able to do it at the collegiate level — not many get to do that.”

By taking sixth at 126 pounds in Class 4 this past season, Bailey became the seventh wrestler in Jackson history to earn all-state honors three times. He joins the club of Brock Howard, Levi Rayburn, Jarrett Reisenbichler, Cody Rouse, Lance Schlick and Joe Wiseman to have accomplished this feat.

Bailey recorded at least 37 wins in each of his four seasons as he finished with a single-season, career-high 46 during his sophomore campaign. He recorded his second and final 40-win season with the Indians this year at 42.

With Bailey on the team, Jackson has been able to win four-straight conference titles, three Tiger Classic titles and finally back-to-back Kinloch Classic titles. The Indians also placed in the top 12 of the Class 4 state meet during Bailey’s final two seasons.

“It’s really humbling to have such a great team surround me and have all these people come support me [on my signing day],” Bailey said. “Not only here, but in practice and having them help me reach the next level.”

Bailey has been wrestling for the past 14 years and started doing so after he watched one of his cousins wrestle at Jackson. Bailey’s career first began in the Optimist League and later became a member of Jackson USA Wrestling.

“They have great coaches, and they don’t always have the most talented athletes, but they focus on hard work and dedication,” Bailey said. “Coach Wachter always likes to use the word, ‘grit,’ as putting in the hardest work you can and outworking all of your competitors.”

When Bailey was a freshman, he was able to win his first conference championship as well as an individual Tiger Classic title, but he failed to reach state. Even though Bailey has very rarely missed a practice, he admitted that he wasn’t that dedicated his freshman year.

“I didn’t do as much extra stuff as I did when I really wanted to reach the next level,” Bailey said. “These last couple years I’ve been putting in extra practices on the weekends. I think that’s really excelled my game.”

One Indian that has been able to help Bailey reach the level he is at today is fellow senior Grady Livingston, who has been Bailey’s sparring partner for the last four years. Livingston had his final season cut short after suffering an injury in this year’s conference tournament.

“It really broke my heart at conference this year when he got hurt — that was terrible,” Bailey said. “Other than that, [Livingston] has been a great partner. I couldn’t have asked for a better partner, and he and I are very close.”

Bailey’s aspirations to wrestle in college didn’t begin until last season, which was where he managed to only lose nine matches with a record of 38-9. Bailey’s goal was to wrestle at a top Division-II program.

Lindenwood’s program finished this past season as the No. 7 ranked team in D-II and had six wrestlers qualify for the National Championship Meet. However, the meet was canceled due to the concern regarding the spread of COVID-19.

“Not just a top D-II program, but one that would help me excel my game to the next level,” Bailey said. “My goal is to win a national championship, so I really hope Lindenwood can help me do that.”

On top of working with Lindenwood’s staff and fellow wrestlers these next four years, Bailey will continue to put in extra time working on his craft. He knows everyone at the college level is “great,” but he believes if he keeps his hard-working mentality, he can achieve his next dream.

“He’s made tremendous growth [these last four years],” Wachter said. “He did a lot of wrestling as a youth and went to a lot of big tournaments, but he’s really matured the last year and really came into himself. He came in as a good wrestler, but really developed himself as an outstanding wrestler.”

Off the mat, Bailey will focus on either becoming an engineer or businessman. For engineering, Bailey enjoys mathematics and science, while he may go into business because he loves cars and would like to sell them.