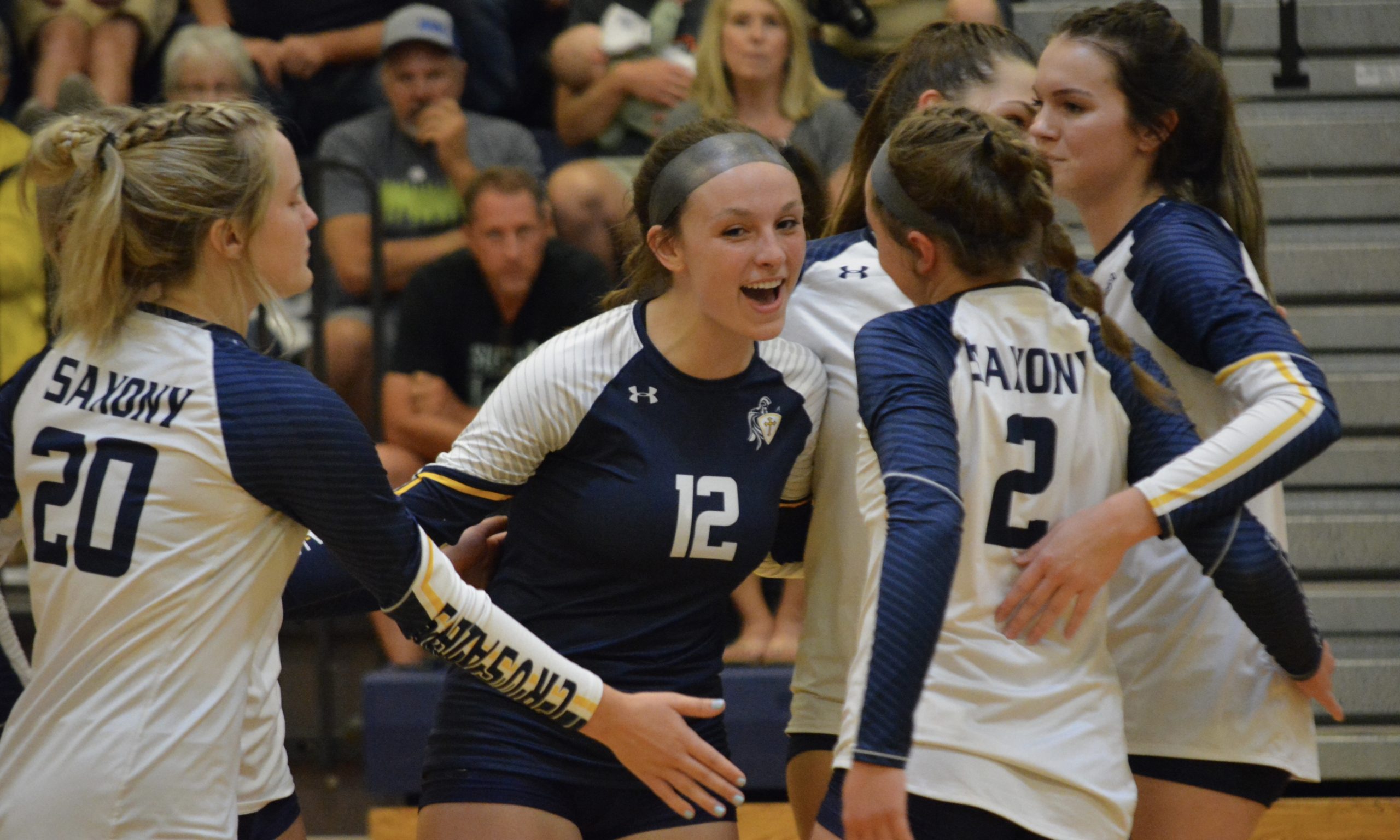 For the first time in school history, the Saxony Lutheran volleyball team was able to bring home the Dig For Life Challenge Championship. The Crusaders only dropped one set in the tournament and lastly brought down Class 4 Farmington 2-0 (25-19, 25-18) in the Red Division Gold Bracket title game.

“Going into the tournament, I just wanted them to play well and see what happens — see what we’re made of,” Saxony first-year head coach Stephanie Brown said. “They exceeded any and all of my expectations.”

Defensive standouts for Saxony to win its first Dig For Life Championship was the combination of sophomore setter Isabel Brown and senior libero Anna Mueller, who came up with seven and six digs, respectively. Brown also led her team in assists with 11, while fellow setter junior Landre Hoehne finished behind her with eight.

“We had gone to the jamboree in Farmington and did not play well,” Coach Brown recalled. “We only played sets to 15, and we lost one of the sets to Farmington like 15-6. It was like we didn’t show up to play, so we were convinced they were thinking, ‘OK, they’re not going to be anything.’

“My girls said, ‘We’ve been here this long, so we might as well win this thing.’ They came out on fire and played amazingly well. This team is such a team — they get along on and off the court and pick each other up. They play for each other just as much as they play for themselves, so I think that’s the one big difference we have going for us this year as opposed to other teams.”

Brown, who led Saxony in assists once again with 13, paced Mueller in digs defensively with eight, while seven other Crusaders had multiple digs as well. Wahlers and Hoehne both had four digs, and Landre also recorded seven assists.

Northwest is, of course, in the same district as Jackson and finished as the Class 5 District 1 runner-ups to the Indians last fall. Jackson is currently 4-0 and will host the Crusaders on Sept. 26.

Prior to the semifinals, Saxony was tasked with facing a Southeast Missouri volleyball powerhouse in Valle Catholic, which has made the state final four in Class 1, 2 and 3 four of the last six seasons. The Crusaders came away with the sweep over the Warriors (3-4) narrowly by scores of 25-23, 25-23.

Josey Wahlers finished with a team-high seven kills and also had six digs, while Anna Mueller came up with the most digs at 12. Saxony junior defensive specialist Callie King also had a key game with seven digs of her own, while Paige Seibel produced three kills and three total blocks.

The only match Saxony failed to win was against last year’s Class 1 fourth-place South Iron (4-2-3) as the Crusaders won the first set by 12 points at 25-13. However, the Panthers came back and won set two by three 25-22. Wahlers led with eight kills and five total blocks, while Clara Brune paced her with six kills and four blocks.

Mueller was once again the Crusaders top defender with 14 digs, while Isabel Brown and junior defensive specialist Katie Swain paced her with seven apiece. Brown finished with the most assists for Saxony at 13 as Mueller even had five in the match.

Upon entering this season, Coach Brown stated that it’s one of her goals as coach for Saxony Lutheran volleyball to become a household name in Southeast Missouri, much like Valle Catholic volleyball, Jackson football and Notre Dame girls basketball to name a few.

With the program’s recent success of winning its first two district titles and now the first-ever Dig For Life Championship in school history, the Crusaders could be on the brink of something special.

“In some of these matches, we were down by five or six points,” Coach Brown said. “These girls just never gave up and had a never die attitude. This is a special group of girls. I’ve been in coaching for 20 years, and I’ve had a couple teams like this but never at the high school level.

“I don’t want this group of girls to stop just because we won [Dig For Life]. It’s a long season, and we have to grind it out. We have goals and dreams, but we have to keep working hard.”