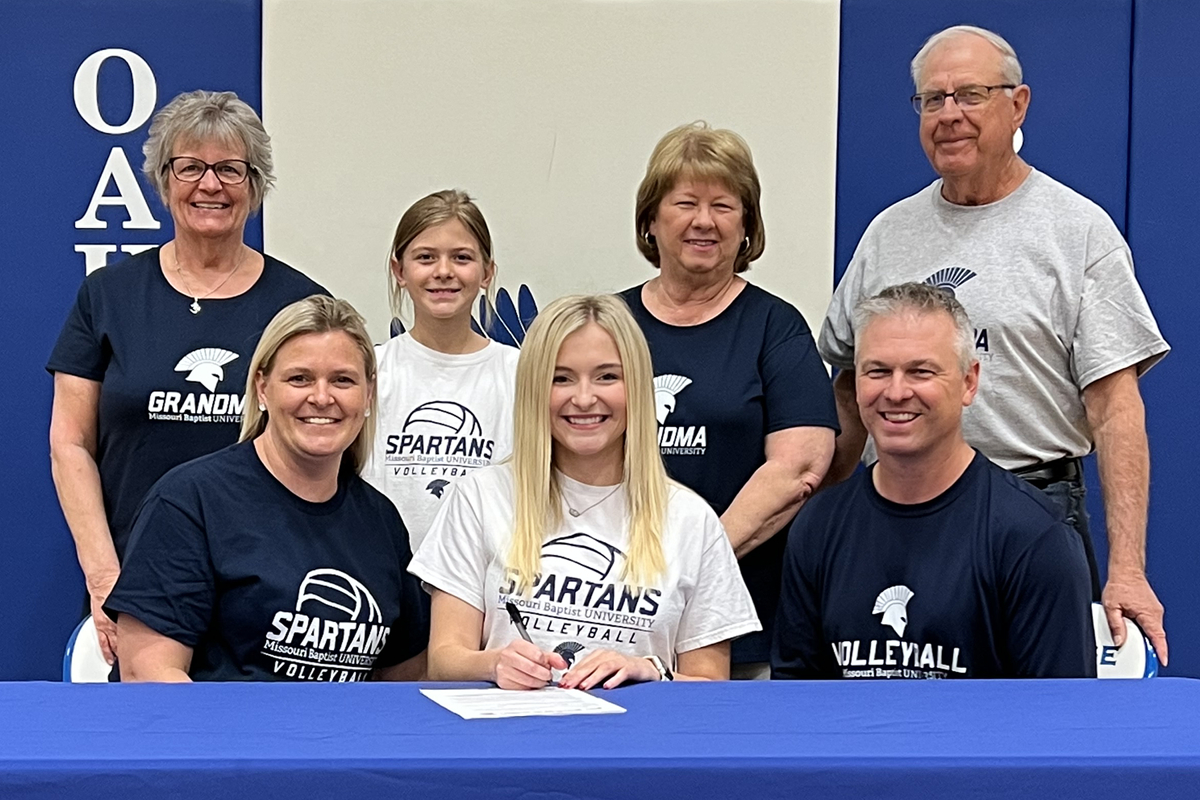 Ever since Paige Glueck started playing volleyball in the fourth grade, she has been playing up an age group. Therefore, it shouldn’t surprise anyone that Glueck never played in one set of junior-varsity action during her four years at Oak Ridge.

Despite playing on varsity as a freshman being a “big eye opener” for Paige, she is more than glad she did so because it’s helped mold her into the player and person she is today.

“My freshman year I was with seven seniors, and I was the only freshman,” Glueck laughed. “They really opened my eyes to start being a leader — I had to be a leader for the younger girls because no one was coming up with me on varsity.

“That was also my first year being a setter, so that new beginning of volleyball really pushed me to who I am today since I’m going to college for setting.”

From that senior class Paige played with as a freshman on a team that finished 23-9-1, four of them went on to play college volleyball. These former Blue Jays are Maggie Howe, Mollie and Sophie Thompson (all signed with Stephens College) and Brittany Showmaker (Frontier Community College).

Glueck enjoys being a setter because it lets her be in control of the game and where the ball goes offensively. However, Paige said there’s definitely weight on her shoulders from having that type of responsibility.

As a do-it-all setter, Glueck finished her high school career as a three-time Class 1 District 4 All-District and three-time Mississippi Valley All-Conference selection. In her final season, Glueck led the Blue Jays in kills (315), digs (397), aces (87) and service receptions (329), and she finished her career with more than 1,000 kills.

“My hitting came from my elementary and junior high days since I was not a setter back then,” Glueck said. “I worked very hard at that because I thought hitting was my path in volleyball. As far as passing goes, I’ve been told I read the ball very well, so I’ve worked hard on figuring out where the ball is going to go before it lands.

“My passing has improved because my team relies on it a lot. As a setter this year and last year, I had the most digs and that’s not common, but it’s fine. They rely on that, so I had to be my best at all times so we could get the win.”

This led Glueck to be recruited and eventually signed by NAIA member Missouri Baptist to continue doing what she loves.

“It feels amazing! I’m very excited for the next step and seeing the next aspect of volleyball,” Glueck said. “Missouri Baptist was the first school to approach me, so that was a big thing for me.

“When I went on my visit, it was such a great experience. Everyone was friendly and always had a smile on their face.”

Missouri Baptist’s volleyball program itself was a very easy sell for Glueck since the Spartans have won the last two NAIA National Championships, while finishing with a combined record of 59-6 overall.

Missouri Baptist had four NAIA All-Americans this season, including senior setter Manuela Vargas. She was also named the NAIA Setter of the Year.

“Missouri Baptist’s head coach Chris Nichols is very welcoming, and he told me that it’s going to be a lot of work,” Glueck said. “But I’m willing to do that for him and the team. This summer, I see myself working much harder.

One of the main reasons why Glueck was able to adapt to varsity and is set to play at the college level is due to playing club volleyball, which she began doing back in junior high when she joined NSSC.

Along with NSSC, Paige played club ball with Pursuit and lastly SEMO Heat this season, which is the same program she went to nationals with in Pheonix, Arizona.

“It was intense — very eye-opening and playing there left me speechless,” Glueck recalled. “It was so amazing to see all the talent throughout the nation.”

While Glueck is certainly going to miss the friends she made and coaches she played for at Oak Ridge, she will also miss the fans. This is because she knows everyone in the stands, which, of course, will not be the case in college.

“I’m going to miss that for sure, and my family probably won’t be able to come as much because I’ll be further north,” Paige said. “But I know they’ll always be there.”

What Glueck is looking forward to the most about college volleyball is not only improving her game, but she also can’t wait to learn more about the sport since she wants to become a coach.

“I’ve known I wanted to be a coach since junior high because I love the sport, and I love my coaches,” Glueck said. “I want to be like my coaches Whitney McFall, Julie Ward and Shaun McClintock, and influence girls like they influenced me.