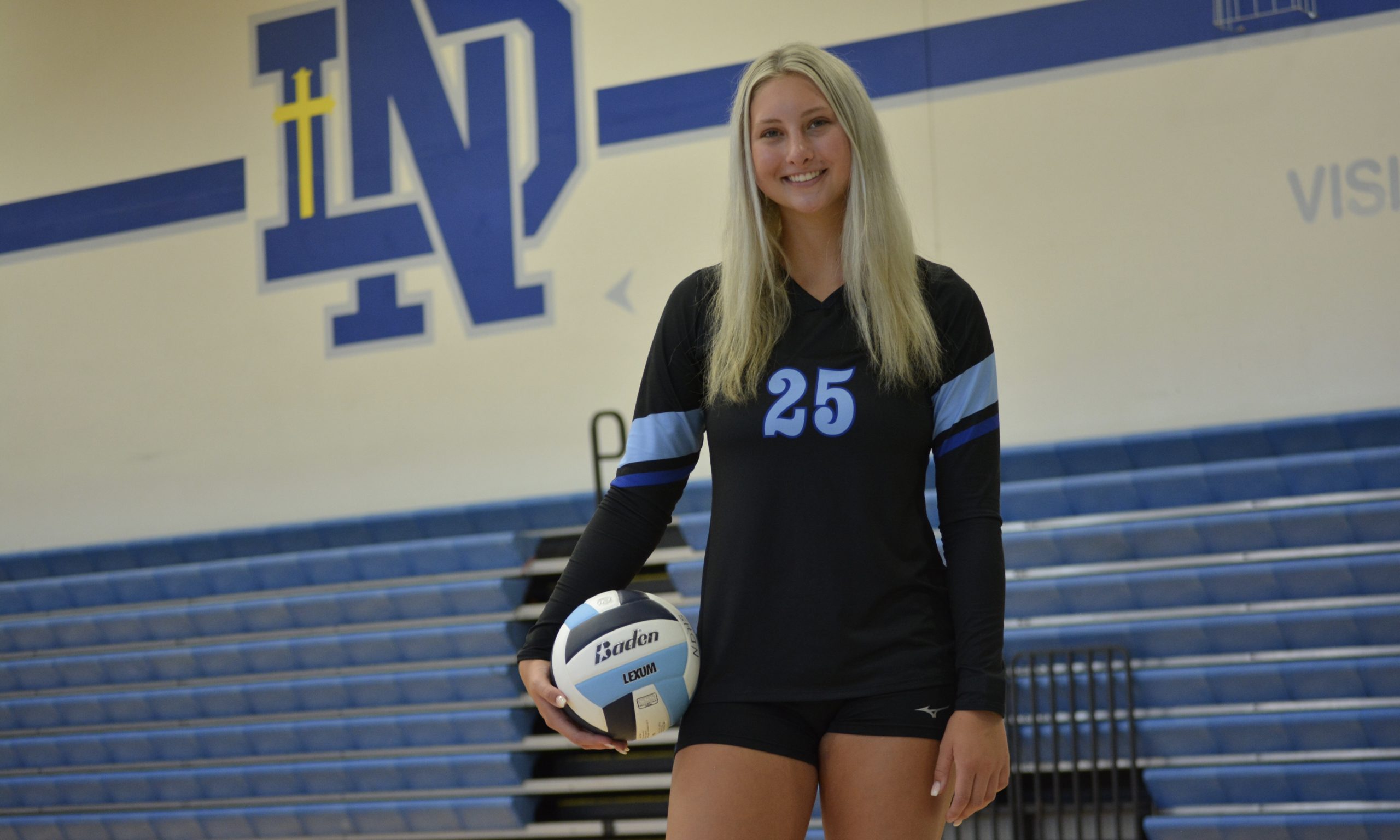 Even though Tori Rubel is known in Southeast Missouri for her abilities to put a basketball through a hoop, she is also quite dominant when hitting a volleyball over a net.

Last fall, Rubel proved this when she was one of the mainstays on the front row for a Notre Dame volleyball team that ended up winning its first district championship since 2015. The Bulldogs, who were 25-6-4 overall in 2021, also captured their first SEMO Conference regular season title in four years.

Along the way, 6-foot-1 Tori recorded Notre Dame’s second-most blocks with 67, third-highest hitting percentage at .337 and fourth-most kills with 117. This rightfully earned Rubel spots on both the Class 3 District 1 All-District and SEMO All-Conference teams, proving that she has indeed garnered respect as a force to be reckoned with on the volleyball court.

In Notre Dame’s 3-2 win to dethrone the reigning conference regular-season champions Jackson, Tori conquered at the net by recording a career-high nine blocks. This performance landed Rubel a spot in the MSHSAA record books as her nine blocks ranks as the 14th highest total in Missouri single-game history since 1950.

Tori had this to say when asked about her mindset when taking over games: “I’m not like mad — I’m just like, ‘Guys, come on.’ If I make a mistake, then I want to do something way better. I guess I get really competitive, and I’m in the zone. I’m trying to do anything I can to help the team.”

Rubel shared this historic 2021 season playing with her older sister and Notre Dame 2022 graduate Lexi Rubel, who is now a college basketball player at UT Martin. Bulldogs volleyball head coach Meridith Brinkmeyer tabbed the Rubels as “The Twin Towers,” whom combined for 142 blocks as Lexi led the way with 75.

While being primed for another standout year, Tori is having to enter her senior season of volleyball after spending the entire summer rehabbing her right shoulder from suffering a massive labral tear in February. This occurred during basketball season, but Rubel was still able to come back from the injury and help Notre Dame’s basketball team win a fourth-straight district title and reach the state quarterfinals.

Even though her shoulder had been separated and torn, Tori said it wasn’t all that painful to play after it was put back into place. The injury was a nuisance more than anything for Tori as she said once her adrenaline was pumping that her shoulder didn’t hurt.

“Once I got most of the swelling out after the initial injury, then it didn’t really hurt as much as it was just sore,” Rubel explained. “Sometimes whenever I’d shoot I’d feel it, but it wasn’t really painful.”

Following basketball season, Tori had surgery in late March to repair the tear in her shoulder. Rubel’s surgeon Dr. George Paletta Jr., who is the head orthopedic surgeon for the St. Louis Cardinals, assured Rubel that she would recover 100% from her injury with no long-term limitations.

Helping Tori with her rehab was physical therapist Katrina Voelker of Southeast HealthPoint Rehabilitation, as well as Rubel’s parents Matt and Michele Millham Rubel, who are both also certified physical therapists.

“They all really helped me come back without there being a delay,” Rubel said. “I feel like the rehab took a while, but I was always doing something with my physical therapy. I was slowly hitting the milestones, where I could dribble and start setting or bumping a volleyball.”

Tori’s surgery forced her to not only miss the summer volleyball season with Notre Dame, but she also had to sit out her final year of AAU basketball. Tori, who ended up verbally committing to play basketball at UT Martin with Lexi in April, was going to play for Napheesa Collier Elite — based in St. Louis — over the summer. Phee Elite won the Run for the Roses Platinum Championship game, which was televised live on ESPN in July.

“In the beginning, it was tough. Especially in July when the whole month is full of basketball, but this year it just wasn’t for me,” Rubel said. “I went to support my younger sisters Kate and Brie, but it was weird because it was usually at the tournaments I’m supposed to be playing at. But I wasn’t.

“Phee Elite, who I was supposed to be playing with, did really well this summer, so that would’ve been super cool to be a part of that experience. It was a struggle sometimes, but it helped that Lexi was there watching with me.”

Even though Tori couldn’t play any sport this summer, she was cleared to dribble in early June and then began shooting and doing more activities later that month. Besides her love for volleyball, Rubel was motivated to make a comeback this fall for her teammates as well as the opportunity to play with Kate and Brie.

“I’m so excited to play — I was really worried,” Rubel admitted. “I didn’t want to miss my senior season, especially with Kate and Brie playing. I’m so excited to be able to play with them. This is our last go around, so I’m super pumped.

“We push each other as sisters, and if Kate is on the opposing side, I will block her in the middle. We have that little sister competition where we keep pushing each other, which is what Lexi and I had.”

While Rubel has now returned to team activities five months post surgery, her shoulder still isn’t 100% when it comes to spiking the ball. To combat this until her right shoulder is at full strength, Tori has been hitting with her left hand instead.

“I’ve been doing this so even if my shoulder gets sore again, they can stick me on the right side, and I’ll just block, or I’ll hit left handed,” Rubel said. “It’s clearly not as good as hitting with my right, but it works.

“The first time I hit with my left hand, it was so awkward — it just feels wrong. I had some training sessions with Jessie Gartman, who’s a big Pursuit volleyball coach. She showed me techniques and different drills to get more comfortable.”

Rubel is slowly but surely getting full strength back in her right shoulder as she’s been using a Thrower’s Ten-like method for recovery. Tori said she’ll be at 75% by the end of this week and 100% the week after that.

While Tori is set to make a full comeback and hopes to emulate the success she and Notre Dame had last season, she’s also out to prove a point in her final year as a Bulldog.

“Even if you lose a ton of players, that doesn’t mean your season is just going to be over.” Rubel expressed. “We have new players coming in and Kristin [Anderson], Anna [Garner] and I are all still here. I want to show people if you work hard, anything is possible. I would love to win another district championship, which would be huge for the school.”