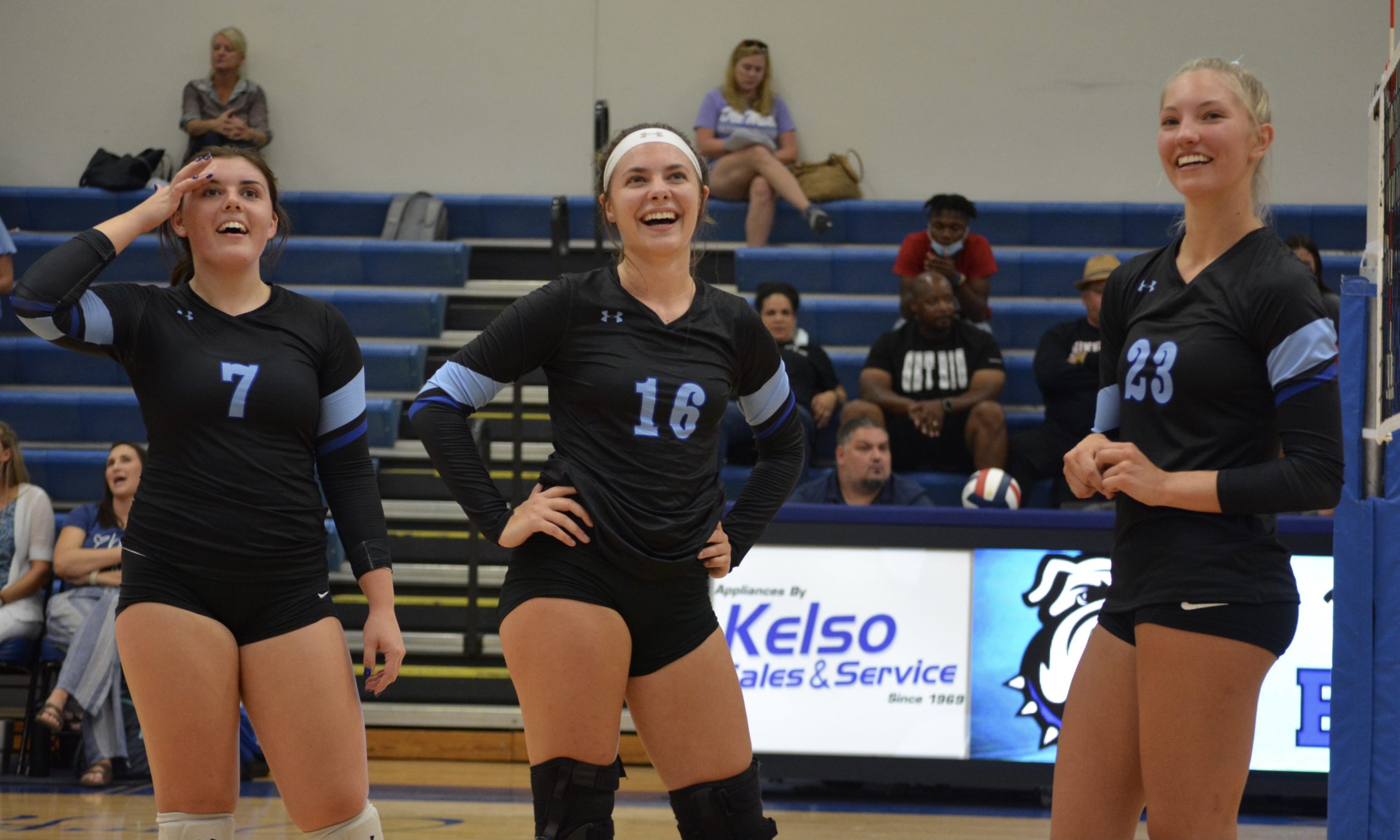 Notre Dame seniors, from left, outside hitter Rylee McClintock (first on team in kills and digs), setter Sarah Brennan (first in assists) and middle hitter Lexi Rubel (first in hitting percentage and second in kills and blocks) have helped the Bulldogs remain unbeaten since Sept. 11. Photo by Jay Forness

Ever since the Notre Dame volleyball team fell short of repeating as Dig For Life Challenge Champions earlier last month, the Bulldogs have recorded their lengthiest winning streak in six years by going 8-0 since Sept. 11.

On top of Notre Dame winning 18 games in a row back in 2015, it was the last season the program brought home a Class 3 District 1 Championship. The Bulldogs have reached the district title game twice since then but fell short both times.

Notre Dame fell to the Bearcats in last year’s Class 3 District 1 Championship match that went all five sets, which Dexter hosted. The Bearcats are once again hosts of this year’s district tournament, but Notre Dame is likely to have the No. 1 seed.

“These are the fun games — these are the games I enjoy and look forward to. Yes, they make me nervous, but this is good volleyball,” Notre Dame head coach Meridith Brinkmeyer said. “This is a big win because we’re getting ready to seed for districts, but I didn’t mention that to the girls at all. Instead I told them, ‘It’s another game. Go out there and do what you have to do,’ and they did that.”

Even though the Bulldogs came away with the sweep, things didn’t start out as Notre Dame would’ve preferred since Dexter was able to take a 7-0 lead in the first set. However, the Bulldogs were able to go on runs of 5-0, 4-0 and 3-0 to rally back for the win.

Notre Dame senior middle hitter Lexi Rubel recorded three of her seven total kills in set one along with her lone block of the contest. Rubel currently fields the highest hitting percentage for the Bulldogs with a .414, while she is second in kills (138) and blocks (39).

Also recording a block and a kill in the first set for Notre Dame was outside hitter and fellow senior Shelby Renner, who had been out with an injury since the Bulldogs season opener on Aug. 31.

The second set was back and forth as it consisted of 11 ties and three lead changes. Notre Dame gained the lead for a majority of the set until Dexter went up at 16-15, but the Bulldogs outscored the Bearcats 6-1 and had a 5-0 run in the final seven points of the set.

Notre Dame senior outside hitter Rylee McClintock notched three kills in the second set along with recording an ace. McClintock, who is the Bulldogs leader in kills with 199 (.363 hitting percentage), finished with 10 against Dexter as fellow outside hitter junior Kristin Anderson tied her career-high total of 13 in the match.

“They have both become so consistent, and they find holes in the defense,” Coach Brinkmeyer said. “Like I told them, ‘It doesn’t always have to be a hard hit. Switch it up and throw in a tip to make them play true defense on you.’ They’ve really done an excellent job of that.”

The third and final set started out well for the Bulldogs as they went on a 3-0 run with two kills from Anderson and the other by Rubel, but Dexter went on its second 7-0 run of the contest to follow. Notre Dame didn’t tie the match until later in the set at 18-all after junior middle hitter Tori Rubel provided one of her momentum-shifting blocks.

Tori Rubel finished with a match-high four total blocks as three of them came in the third and final set of the sweep. Rubel leads the Bulldogs with 40 blocks as she’s recorded multiple deflections through 10 games (team-high). Six of Tori’s multiple-block outings have been in her team’s last eight games.

“What I tell [Lexi and Tori] is that, ‘It doesn’t have to be a kill block. You just need to slow it down enough to give our defense time to react,’” Coach Brinkmeyer said. “I thought they did that very well tonight, and so when they can do that our defense is pretty solid.”

McClintock and Lexi Rubel combined for 19 kills with 10 and nine, respectively, as Tori Rubel paced them with five. Tori also finished with a team-high two blocks as Lexi and Rylee each recorded one as well.

“The girls’ chemistry couldn’t be any better — they’re in it together as a team and want the team to win,” Coach Brinkmeyer said. “It’s not about individual success, which is, I think, a big part of the team’s success. Sometimes you may have a couple players who are like, ‘I want to do it all for me,’ but these girls have really come together as a team.”