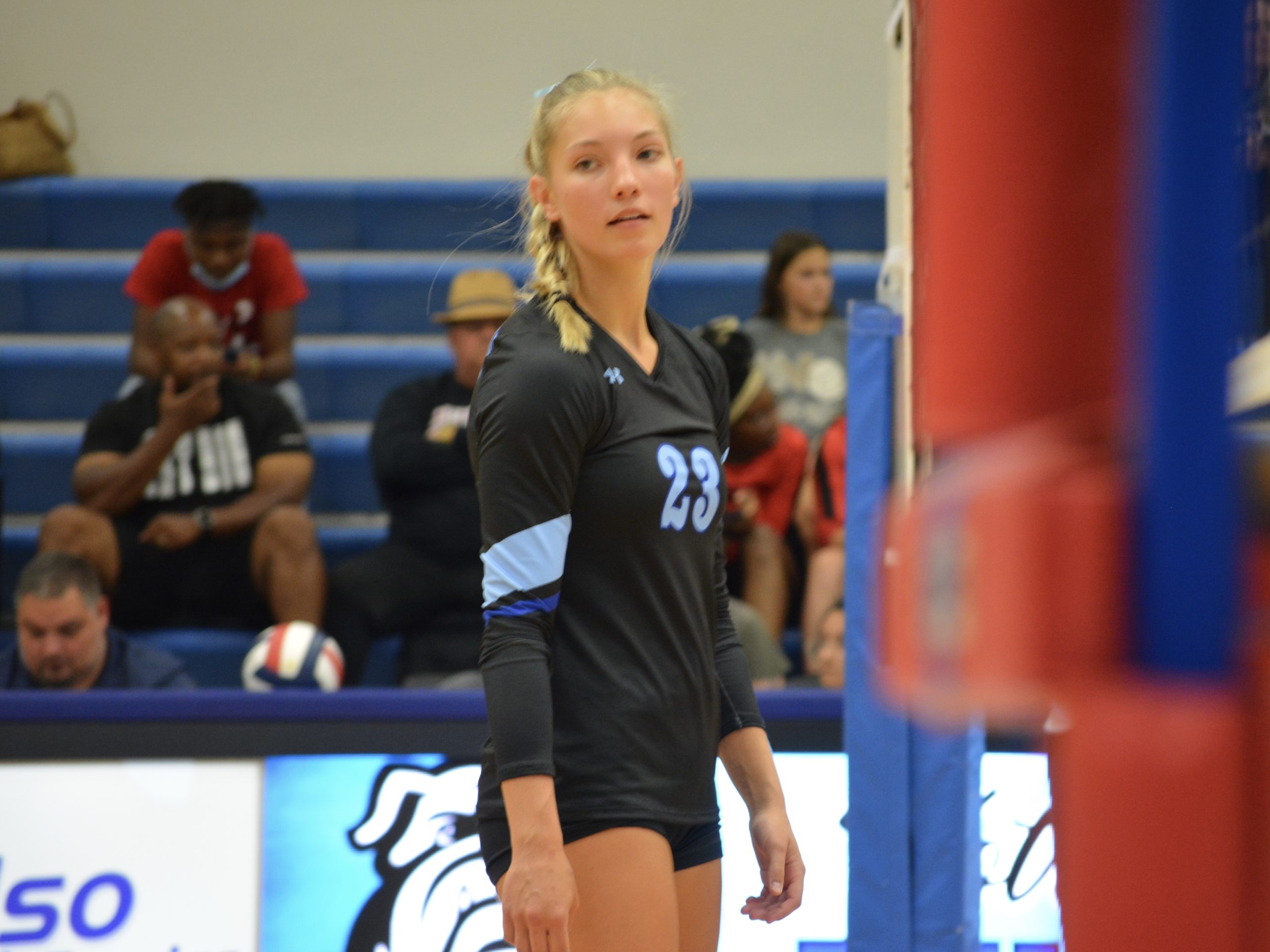 Senior middle hitter Lexi Rubel is Notre Dame’s leader in blocks (16), while being second in hitting percentage (.392) and tied for second in kills (57). Photo by Jay Forness

Even though the Notre Dame volleyball team was unable to repeat as the Dig For Life Challenge Champions this past weekend, the Bulldogs are starting to find out how dangerous they can be offensively.

To no one’s surprise, Notre Dame’s four-year starter senior outside hitter Rylee McClintock currently leads the Bulldogs with a team-high 80 kills as she fields a .349 hitting percentage.

McClintock has been the Bulldogs single-game leader in kills five times, while fellow senior and middle hitter Lexi Rubel has led the way in two. Lastly, junior outside hitter Kristin Anderson has had the most in one contest.

McClintock has recorded the most single-game kills for Notre Dame at 21 to start the season in a five-set match versus Farmington. She’s had two double-digit kill outings since then (13 and 11) as Anderson has recorded two (13 and 10), while Rubel has also had one (10).

Rubel is currently second overall in hitting percentage at .392 and is tied for second in kills with 57, while Anderson is tied with Lexi for the second-most kills and is third overall in hitting percentage (.381). Rubel also happens to be Notre Dame’s leader in blocks at 16 as she is paced by her sister and fellow middle hitter junior Tori Rubel at 15 for the two to have combined for a total of 31 blocks so far this season.

Lexi and Tori, otherwise known as The Twin Towers of Notre Dame, have combined for double-digit blocks in a single game once already, which was in the five-set bout against Farmington. Lexi came up with a single-season, game-high seven blocks as Tori paced her sister with three of her own.

The second-highest block total for the Rubels was versus Gideon in the Dig For Life Challenge at six (Tori four, Lexi two) on Friday. Tori has already finished four games with having recorded multiple blocks, which is the most for Notre Dame.

On top of her defensive prowess, Tori Rubel happens to be the Bulldogs leader in hitting percentage with a staggering .424, while being fourth in kills at 35. Even though she has yet to lead Notre Dame in kills for a single game this fall, Tori has finished as one of her team’s top-three hitters on three separate occasions.

The Bulldogs fifth leader in kills is senior setter Sarah Brennan, who has come up with 24 along with her 101 assists. Brennan shares setting duties with fellow senior setter Claire Jones, and she leads Notre Dame in assists with a total of 119.

“I think the girls are realizing how much of an offensive threat we are, and when we don’t use that is when teams come back on us,” Notre Dame head coach Meridith Brinkmeyer said. “If we can run our offense and keep teams out of their system, it’s going to be a better game for us.

“We have Rylee, and Lexi Rubel has come out of the gate this season. [Lexi] is a big offensive threat up there, and Anderson has really stepped into her role. Then both of our setters are good at placing the ball.”

McClintock leads the Bulldogs in digs with 101 as senior defensive specialist Brooklyn Greaser paces her with 90. Anderson is third in digs at 77, while Brennan and Jones are behind her with 74 and 72, respectively. Lexi Rubel is sixth with 53 digs.

Notre Dame is 4-2-2 right now after finishing Dig For Life 2-1-2 as there were only two sets in pool play, which is where it split games with Gideon and Northwest. Ending the Bulldogs hopes of winning Dig For Life a second-straight season was Valle Catholic in the Red Division Gold Bracket Quarterfinals, 2-0 (25-21, 25-23).

The Warriors are now in Class 3 due to the MSHSAA championship success multiplier, so if Notre Dame wins its district, the Bulldogs could face Valle Catholic again in the sectional round.