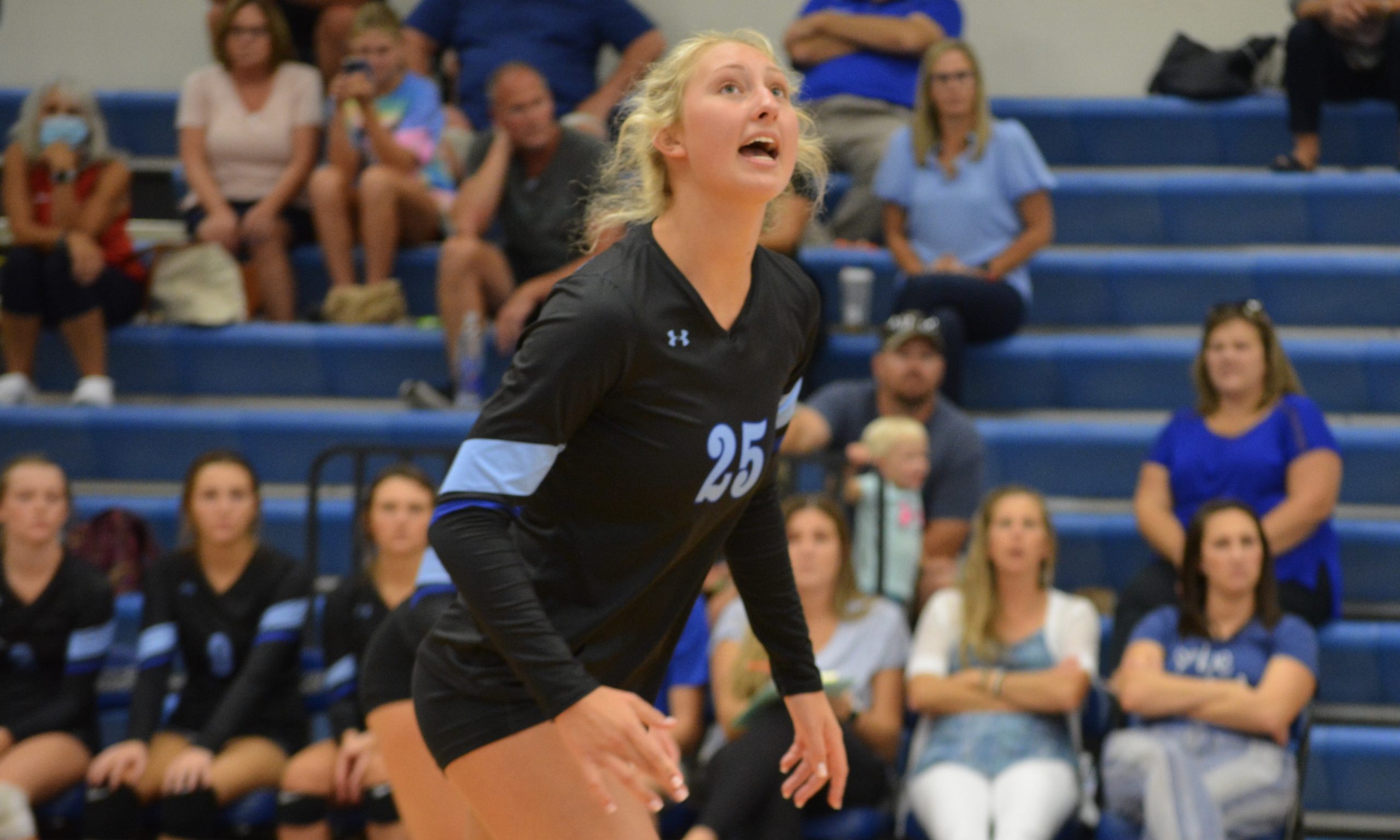 The last time Notre Dame volleyball defeated crosstown rival Jackson was in 2018 for the SEMO Conference Tournament Championship when Bulldogs junior Tori Rubel was a member of the junior varsity squad.

“It feels really good — we’re kind of running on a high right now. We were focused on our other games this week, but we were ready tonight to come out and play our best,” Rubel said. “Jackson played really well, too. After the first set, I think we all were just a little bit nervous. Then we realized, ‘They’re just another team. We can do it,’ and we came together and played our game.”

Rubel was able to impose her will at the net against Jackson’s hitters as she notched not only a match but a career-high nine blocks, which happens to be the sixth-most ever total blocks recorded in MSHSAA single-game history.

“My coach — Coach [Meridith] Brinkmeyer — always says, ‘Watch the ball, setters hands, ball, hit,’” Rubel explained. “That’s what I think in my mind, so I watch the ball and follow it to try to get to my spot.”

Surprisingly, Rubel ranks second in total blocks on Notre Dame with 28 as she has one less than her older sister and fellow middle hitter 6-0 senior Lexi Rubel, who currently has 29. Tori does, however, have the most solo blocks with 17 and has recorded multiple blocks in six games, which is also a team high.

Against Jackson was the second time Lexi and Tori Rubel — popularly known as The Twin Towers — combined for double-digit blocks this season.

“I love playing with Lexi — I’ve been wanting to play volleyball with her since freshman year because we’ve always gotten to in basketball,” Rubel said. “In volleyball, it’s just really fun to play with her, and she makes me feel really welcomed. She hypes me up — I love it.”

As a two-year starter for the Bulldogs basketball team with Lexi, Tori has led Notre Dame to a 6-0 record over Jackson, including claiming back-to-back SEMO Conference Tournament and Holiday Classic Championships.

Tori Rubel’s elite defensive performance was very much needed against a Jackson team that entered the match undefeated at 5-0. The Indians also field several weapons offensively as six players currently have recorded 21 or more kills.

Jackson’s attack was led by freshman hitter Katy St. John as she produced a game-high 20 kills, while sophomore outside hitter Ella Domian paced her with 12. The Indians third leader in kills versus Notre Dame was sophomore hitter Nadia Wasilewski with eight (.132 kill percentage) as senior middle hitter Mia Trankler only produced six on 19 attacks for a .053 kill percentage.

The main reason why Tranker’s kill percentage was so low is because she was indeed facing Tori Rubel for most of the night, which resulted in her and Jackson’s hitters to change their attack approach. Fellow Bulldogs senior outside hitter Rylee McClintock and senior setter Claire Jones were also key defensively as they each recorded four total blocks, while senior setter Sarah Brennan had two as well.

“This was one of Tori’s best games this season. I mean, she put up some big blocks for us,” Coach Brinkmeyer said. “I was so proud of her, and we’ve been working on her hitting. I think she’s gradually getting better, but she was a wall up there tonight, and I’m glad that she’s on our team!”

Even though Notre Dame’s current leader in blocks Lexi Rubel only finished with one against Jackson, she had the third-most kills with eight including one for the match-winning point. McClintock came up with a team-high 17 kills as junior outside hitter Kristin Anderson recorded 11, while Brennan and Tori Rubel had four apiece.

Anderson, who is a first-year starter like Tori Rubel, is currently the Bulldogs third leader in kills with 80 as McClintock leads the way at 125 as Lexi Rubel paces Rylee with 88. Anderson is also one of Notre Dame’s four players with triple-digit digs as she has 119 so far.

“Anderson can hit that [outside] line better than most people. Starting the season at Farmington, she wasn’t starting,” Coach Brinkmeyer said. “I told her, ‘I’ll get you in when I can.’ She has stepped in and done more than what I’ve expected. She’s fit in just perfectly and is a go-getter.”

This was the second match of the year that went all five sets for Notre Dame (7-2-2) as its first was in a 3-2 loss to Class 4 Farmington to start the season. On top of beating Jackson for the first time in three years, the Bulldogs also avenged their loss to Dexter from the 2019 Class 3 District 1 title game by beating the Bearcats 2-0 in the Dig For Life Challenge.

“Honestly, the sky’s the limit for this team. I tell them, ‘Girls, we’re working towards an end goal here,’” Coach Brinkmeyer said. “As long as they can tell and truly say to themselves, ‘I’ve gotten better each time,’ that’s what we need to do.