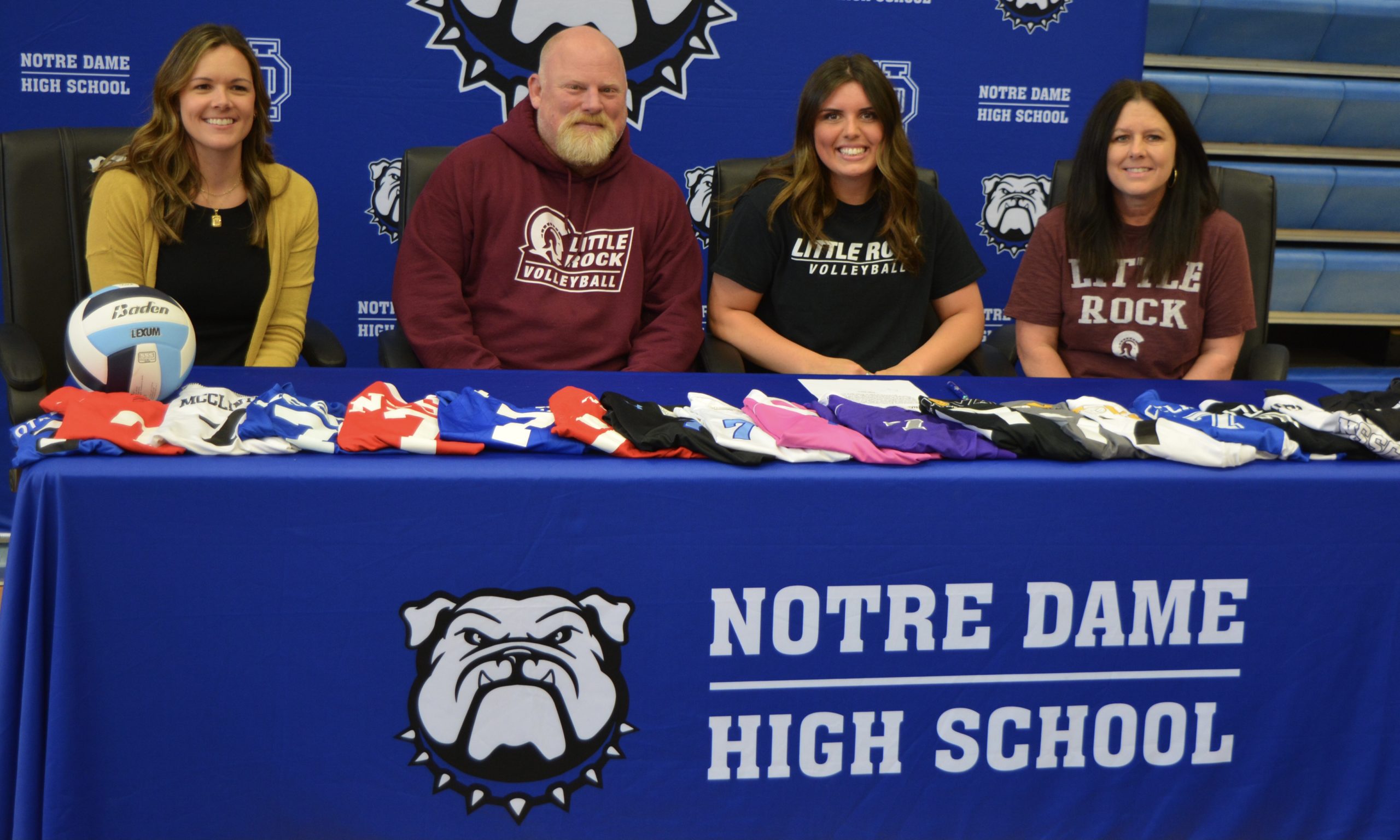 Volleyball has been a part of Rylee McClintock’s life ever since she was three-years-old, and she’s put it countless hours of practicing, training for and studying the game since then to become the player she is today.

Instead of playing catch growing up, McClintock was hitting the volleyball around with her father. Rylee’s parents both played college volleyball, so it’s no surprise that she will be following in their footsteps.

“I started loving volleyball when every day I’d ask my dad, ‘You wanna go outside?’” McClintock said. “It started as more of a fun thing and just playing, but then it got serious, ‘I actually want to do this.’ I loved it before I started even wanting to play.”

The only question was for McClintock, who was an all-state selection in her final year at Notre Dame, was where she would play at in college.

Rylee’s goal was to play at the Division-I level, and she achieved that by signing with new Ohio Valley Conference member Arkansas Little Rock last month. Little Rock currently competes in the Sun Belt Conference.

“Younger me would be so proud,” McClintock said. “My dad is my club coach, so every single day he’d reach out to colleges. He would be like, ‘How about Arkansas State?’ He’d call them, and then I went and visited. My choice was between them and Little Rock, but once I went to Little Rock, I was like, ‘That’s it.’”

What McClintock enjoyed about Little Rock is that she described it as a small school in a big city. Rylee also met the team upon her visit and discovered there were players from other nations on the roster like Brazil.

“It’s cool being exposed to that different culture and talking to them because that could help me grow,” she said. “That was a really cool aspect, and the campus is super gorgeous with plenty of nature. There’s even a creek going through it. The gym is gorgeous, too, so it was a great fit.”

One of the main reasons why McClintock is going to play Division-I level besides her ability is because of how competitive she is. Rylee said this is something that’s been bred in her ever since she was younger and growing up with her two boy cousins.

“They always kept me competitive, and I always had to be strong in anything we played,” McClintock said. “I think just playing with those boys since I was little helped, but it really helped once I got to volleyball.

McClintock finished with plenty of hard kills throughout her high school career as a Bulldog, especially this season as she recorded a team-high 376 kills. Rylee was also first in digs with 438 while finishing second in hitting percentage (.346) and third in total blocks (44).

Even though Rylee has played in the front row for her entire playing career, she will be a defensive specialist at Little Rock.

“Especially lately in the past year, I probably knew I was too small to be on the front row in college,” McClintock said. “I really tried to strengthen my defensive game, and I’ve always loved defense.

“Anytime anyone asks me, ‘How is front row?’ I’m like, ‘I like back row better!’ You wouldn’t expect it, but I like defense more than front row, so I’ve always had a love for playing back row.”

While front row has primarily been where she’s played throughout her career, Rylee has been forced to play in the back row with her club volleyball teams if there weren’t a lot of players that season. She also rotated in the back for Notre Dame this season.

“Whenever I started thinking about college my sophomore year, that’s whenever I was like, ‘I need to step up my back row game,’” McClintock said. “The main thing of defense is probably just going for it. It’s an easy thing to learn, but if you’re the person who chases the ball to the end of the bleachers unlike other people, that’s how you stand out.”

The Rubels, also known as The Twin Towers, were named all-district and all-conference along with McClintock, as were fellow Bulldogs like senior setters Sarah Brennan and Claire Jones, and junior hitter Kristin Anderson.

Notre Dame finished with its best record since 2015 at 25-6-4 overall, and Rylee couldn’t be happier with how her high school career ended.

“I’m very proud of our team this year because I’ve been on varsity since freshman year, and I never got most of those things till this year,” McClintock said. “All that work has finally paid off, and I’m getting recognition for the work that I put in.”