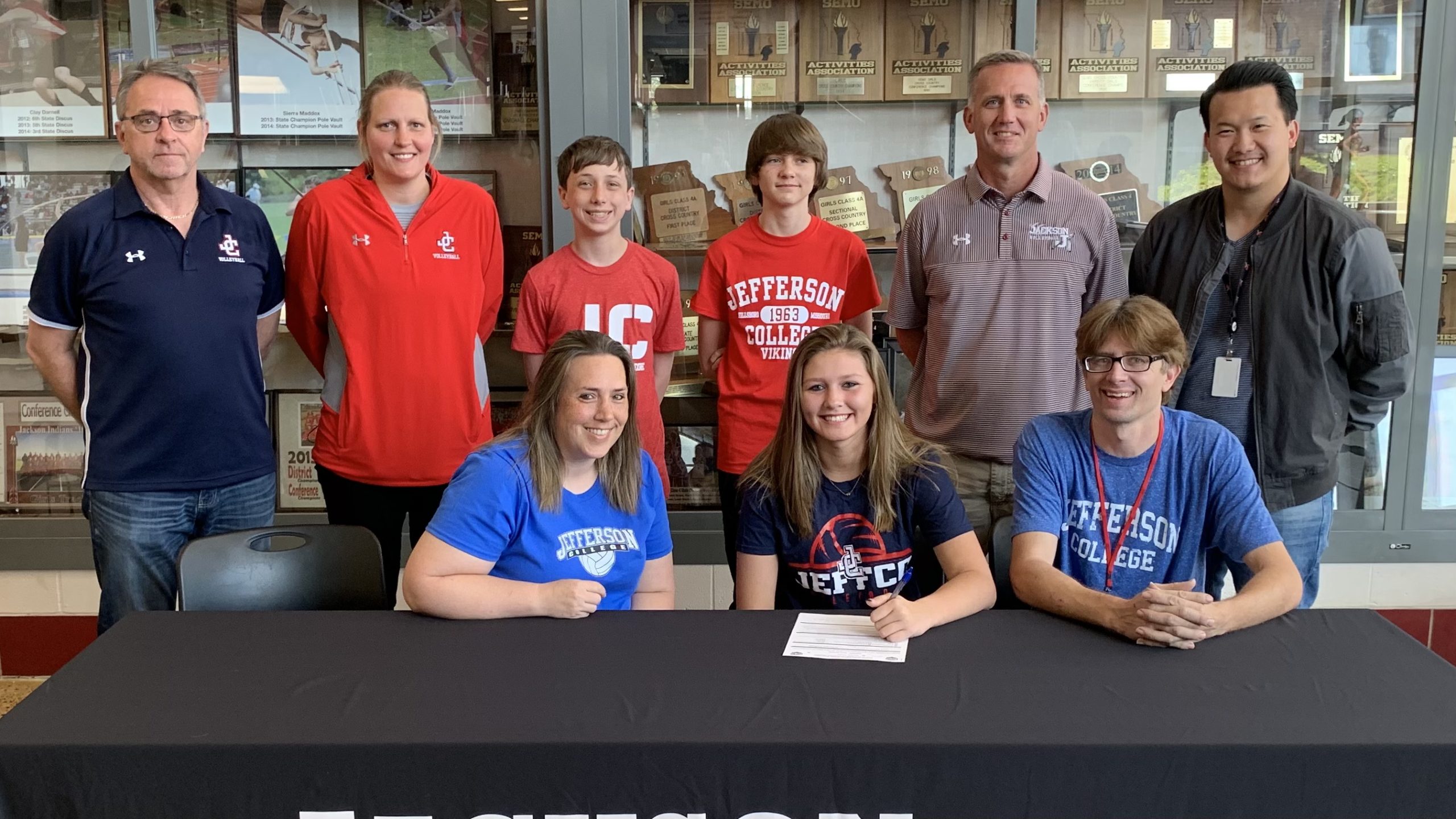 Haylee Quatmann has been playing volleyball ever since she was in the third grade, so when the Jackson senior signed with Jefferson College to continue her career on April 26, it was a fulfillment to her younger self.

Playing college volleyball didn’t become a dream of Haylee’s until she chose to play it over softball during the fall season, which was a decision she had to make in middle school.

At first, Quatmann was worried about making her seventh and eighth grade teams because she knew if she didn’t, then she probably wouldn’t be able to make her club or high school teams. Haylee, of course, made her middle school teams, and after making the varsity team her sophomore year, she realized college was an option.

Quatmann was introduced to volleyball by her mother, Anne, who actually played at Jackson herself. However, Haylee developed her own love for the sport when she joined her club team Pursuit.

“Having the same girls play club with you and school ball with you just made me love it even more,” Quatmann explained. “So ever since then, volleyball has just been my life.”

Quatmann went on to say that even though club and school volleyball are “so much different,” playing in the summer helps her be prepared to play for Jackson in the fall.

Being on the same team with players in both club and school volleyball helps build a lasting chemistry, Haylee expressed. Developing relationships and spending time with her teammates is what Quatmann by far enjoys the most about the sport.

“Our locker room memories — there are so many,” Haylee said. “The whole team was just so energetic, and I loved traveling with them. The bus rides were always very interesting.”

Along with that, the Indians have won 26 or more games (31 this past fall) each season for a combined record of 85-23-5 with Quatmann on the varsity team. Haylee finished her high school career as a two-time all-conference and all-district selection with career totals of 382 kills and 124 blocks.

Quatmann attributes her team’s success primarily to Jackson volleyball head coach Dave Mirly, who took over the program in 2017.

“Well being close and being really good friends with the team — Coach Mirly definitely helped with that,” Haylee said. “When he showed up, we did team bonding and had more fun practices. We all then clicked a little more, so when we were on the court we were all just comfortable with each other, talk and cheer each other on.

“Coach Mirly is the one who made Jackson volleyball what it is now because four years ago it wasn’t anything like it is today. He showed up, went at it and made sure we were improving and doing better than we had been before he showed up.”

The way Coach Mirly made practices more enjoyable for Quatmann and company was by making them more competitive with implementing drills like speedball and queen of the court. Another interesting element Mirly adds to practice is pairing off upperclassmen with underclassmen.

“I’ll be on a team with [freshman] like Nadia [Wasilewski] or Holland [Guilliams] or Ella [Domian], and we’ll all play together,” Quatmann said. “So I get to talk with some of the underclassmen, and they get to hang out with us. Like before districts, we played spoons for a little while and ate breadsticks because the cross country team had extra food.”

Haylee said the way she tries to be the best teammate she can be is simply by being there for everyone. For instance, during this season when a younger player would start on varsity and did not have the best game, Quatmann would reassure them that, “It happens. I just try to encourage them and make sure they don’t get in their own head.”

Quatmann burst on to the scene for Jackson’s volleyball team her sophomore year after only playing on the freshman team in 2017. Haylee said her biggest jump came between her freshman and sophomore year, and that she even surprised Coach Mirly with how much she improved over the summer.

Quatmann also received coaching from a former SEMO volleyball rightside hitter in Haley Bilbruck, who earned All-Ohio Valley Conference honors her senior year in 2018. Quatmann described Bilbruck as her mentor and she’s been someone Haylee has looked up to ever since she was an assistant coach for Pursuit.

“She’s tall, left handed and a rightside hitter — everything I dream to be,” Quatmann laughed. “Having them as my coaches my freshman year was a really big help to be able to improve.”

The past two club volleyball seasons, Haylee has played for NSSC under Carl Ritter, who scheduled a tryout at JeffCo for Quatmann and nearly the rest of the entire club team. Haylee said she instantly loved JeffCo’s team and the environment, which is what helped her decide to sign there.

Quatmann hopes to play at a university after her time at JeffCo since she has several colleges that are interested in signing her when she’s finished playing in JUCO.