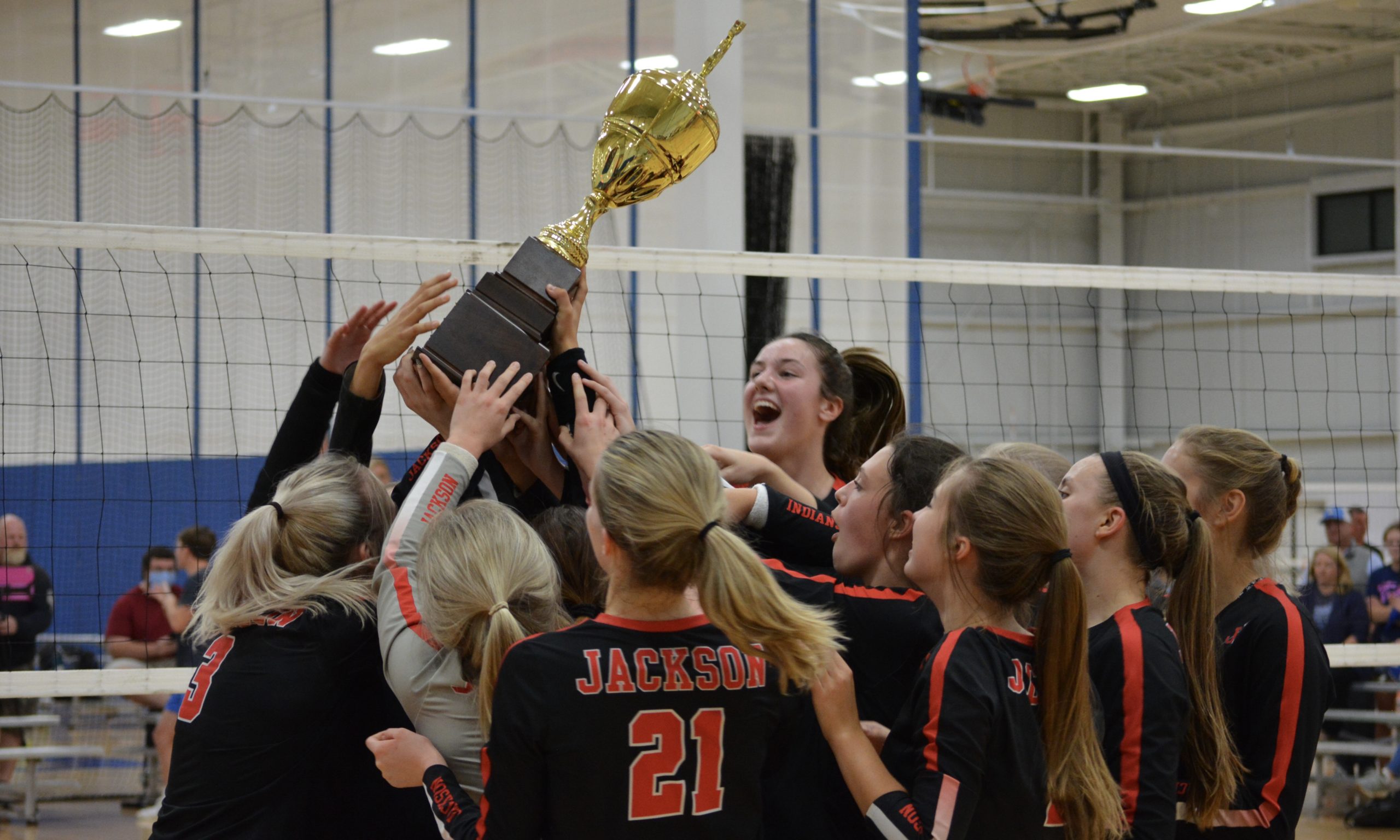 The Jackson volleyball team celebrates with the SEMO Conference Tournament Championship after beating rival Notre Dame 2-0 (25-19, 34-32) in the title game on Oct. 19 at the Cape Girardeau SportsPlex. Photo by Jay Forness

Even though the Jackson volleyball team failed to come away with what would have been its fifth-straight SEMO Conference Regular Season Championship this fall, the Indians ended the conference tournament by hoisting the championship trophy for the third season in a row.

Jackson did so with a 2-0 win (25-19, 34-32) over conference rival Notre Dame in the title game, which is the same team that defeated the Indians earlier this year to win the regular-season championship.

“We were pretty upset after that loss, and we knew we let it slip away,” Jackson head coach Dave Mirly said. “Every day in practice those girls were ready to work, and I know in the back of their minds they were like, ‘I can’t wait to get another crack at Notre Dame.’ We came out and made enough plays to win tonight.”

Not only was Jackson able to not lose a set against the Bulldogs in the finals, but it was able to sweep every team it faced throughout the entire conference tournament.

Jackson senior middle hitter Mia Trankler paced St. John with 12 kills and had a perfect hitting percentage. Mia adjusted her hitting style against a Notre Dame front line that had 22 blocks in the regular-season matchup. The Bulldogs only combined for six blocks this time around.

Coming up big defensively for Jackson were sophomores Holland Guilliams, libero, and Grace Newell, defensive specialist, as they combined for 22 digs with 12 and 10, respectively. Guilliams is far and away Jackson’s leader in digs this season with 333.

Notre Dame’s leader in kills was senior middle hitter Lexi Rubel as she produced a team-high 11 on 20 attempts (.550 hitting percentage). Rubel even went on a 4-0 scoring run of her own in a second set that included 14 ties and nine lead changes.

“When it’s Jackson versus Notre Dame, you’re going to be at the edge of your seat. If you’re a parent, you’re chewing your finger nails off because it’s just going to come down to the very end,” Mirly said. “[Notre Dame] just won’t go away, and I thought they played really well. I thought their serve-receive was the best I’ve seen all year long. They were so scrappy and kept the ball alive.”

Defensively, Lexi was the only Bulldog to record multiple blocks in the title game by coming up with two. Rubel is second in kills (252) and first in blocks (68) for Notre Dame.

Senior outside hitter Rylee McClintock also had double-digit kills for Notre Dame with 10 out of 25 attacks (.320) as she also led the team in digs with 14. Rylee is the Bulldogs leader in kills with 337 and digs at 403.