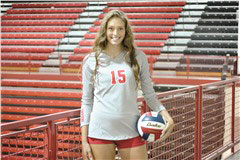 Anyone who has watched a Jackson volleyball match over the last two years should have come away with at least one thought: Hannah Shinn can spike the ball and spike it hard.

Shinn’s playing career began back in the fourth grade when she joined the SMASH Volleyball League in Cape Girardeau because “it seemed like a cool sport.” It’s safe to say Shinn both thoroughly enjoys and succeeds in it.

As a member of the Indians front row, the Jackson senior has recorded a total of 528 kills en route to garnering first team SEMO All-Conference and Class 4 District 1 All-District honors back-to-back. In her junior campaign, Shinn became the third-straight Indian to be named the SEMO Conference Player of the Year after producing 232 kills and a team-high 66 blocks.

Shinn’s junior year was the same season Jackson finished with an overall record of 28-9-3 (undefeated at home) and won three championships, which were the conference regular-season, conference tournament and district title.

Aside from winning championships, Shinn’s favorite aspect of volleyball is the atmosphere and energy that the sport breeds. Whether it’s a kill of her own or one of her teammate’s, Shinn can’t get enough of the excitement.

“Once it goes straight down, immediately you feel this rush of adrenaline, and you’re like, ‘Oh my gosh! I’m so ready to go,’” Shinn explained. “It’s awesome because it’s crazy how immediately it can lift up a team, and they’re ready to go for 10 more points.”

Naturally, Shinn has always played as a hitter and her favorite aspect of playing the position is when the offense runs a 7, which is a high set that goes right behind the setter. This is a fast-paced play where Shinn is usually able to spike the ball straight down — resulting in a kill more times than not.

While Shinn can spike the ball as hard as any other player in the state, she can also be diverse in the way she hits. Playing in the middle has made Shinn realize that she always can’t hit the ball straight down, so she’s had to find different angles and methods.

“In junior high before Coach [David] Mirly came here, I was not very good,” Shinn laughed. “He’s always like, ‘You have to hit angles.’ I remember as a sophomore and junior, he was always practicing me to rotate.

“I would always hit the corner, and at the end of my junior year I was like, ‘Oh, there’s that spot open. I can tip it over here.’ I started actually looking at the court, and I’m able to move my hand in weird ways. Sometimes I jump really weird, but it all works out.”

Even though Shinn has played volleyball for a majority of her life, it wasn’t until the summer of her freshman year when she started working out more individually to improve. This was after a conversation she had with Coach Mirly as he told Shinn she had potential and could be “really good.”

Shinn primarily focused on developing her swing that at first was more of a hook she described, which made the ball sail straight out. She learned she must stay behind the ball and swing through.

Another technique Shinn improved on to become the hitter she is today was her approach. This can vary depending on where a player is at on the court.

“You might take bigger steps, but in the middle you have to take really small steps so you still stay behind the ball,” Shinn said. “When you move around a lot, what used to happen to me is I would just go with one approach fits all. I would just do the same thing and it wasn’t that effective, so you have to have in the back of your brain, ‘I’m in the middle. Go shorter.’”

During her freshman season, Shinn only played in 11 of the team’s 84 sets as she recorded eight kills and seven blocks. It was not until Shinn’s sophomore campaign when she established herself as a force in the middle for the Indians.

Shinn led Jackson’s offense in 2018 by recording a team and career-high 288 kills while finishing second in blocks with 38. She also recorded a team-high 35.6% kill percentage.

Overall, the Indians finished with a record of 26-9-2 and won the regular-season conference championship, while placing second in the conference and district tournament during Shinn’s first year as a starter.

“I would say that starting off freshman year helped a ton even though I kind of got thrown out there because Coach Mirly was like, ‘I need you to go out there. Someone got hurt,’” Shinn recalled. “I was like, ‘Oh my gosh — what’s happening?’ I was with Lainey Broussard, so I started to understand how she set and how everything worked. The support from those upperclassmen helped a lot, so I was like, ‘Oh yeah, they told me I can do this. I can do this.’”

Shinn has now played with two SEMO Conference Setters of the Year as Broussard earned the honor in 2018, while Shinn’s best friend and lifelong teammate senior Madelyn Bourner earned the honor last season. Broussard recorded a total of 729 assists the year she earned it as Bourner bested that total with 802 in 2019.

“It helps that Madelyn and I are best friends, so how I think about it is we’re on the same wave length,” Shinn said. “I get the idea, “Oh, she’s going to set me. It’s going to be low — it’s going to be high.’

The first team Shinn and Bourner were on together was a club soccer team back in kindergarten, which fellow senior outside hitter Olivia Ward was a member of as well. The three also were all teammates in the SMASH volleyball league along with senior defensive specialist Riley O’Neal.

Shinn, Bourner and Ward were also club soccer teammates with senior libero Katelyn Miller, who verbally committed to play soccer at Southeast Missouri State over the summer. Bourner, Miller and Ward each earned all-conference and all-district honors on the volleyball court with Shinn last season.

On top of playing with two conference setters of the year, Shinn has also played with Jackson liberos like Miller and 2019 graduate Hannah Wilson, who was named the 2018 SEMO Conference Player and Defender of the Year. Wilson recorded 498 digs her final season, while Miller had 411 last year.

“They have a skill that I could never top — it is a God-given talent,” Shinn said. “They are both such sweet people, and to be back there I could not imagine the pressure. Hannah Wilson handled it amazingly, and Katelyn is no short of that.”

Following high school, there is only one college Shinn wants to attend and that is the University of Missouri–St. Louis as she wants to get into their pre-optometry program. The reason why Shinn wants to become an optometrist is because she enjoys helping people and thinks eyes are really pretty.

“The things you see in this world are gorgeous, and I want everyone to be able to see that,” Shinn said. “If I can help someone see something awesome or amazing, I want to help them.”