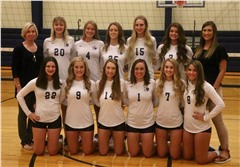 For the second-straight season, Saxony Lutheran’s volleyball team
will have a new face at the helm as Emily Wahlers officially stepped in to take
the head coaching job this offseason.

The Crusaders were coached by Mark Moore last season, who helped
lead them to the Class 2 District 2 Championship match and finished 13-17-5
overall.

Saxony fell to Bloomfield 2-1 to come short of winning the district
title, but the team only lost three players to graduation. However, one of
those three players was Macy Morehead, who signed with East Central College
following her final season with the Crusaders.

Morehead recorded a team-high 331 kills with a kill percentage of
37.6, while also coming up with the Crusaders second most kills at 354 and the
third most blocks at 20.

“I believe we have a very good chance of taking that district title
this year,” Coach Wahlers said. “With [the players] coming up and our
experience, if everything goes the way we’ve got it planned I think it’s a very
good possibility.”

Wahlers has coached volleyball for the past 23 years and was most
recently the head coach for Meadow Heights on top of coaching club volleyball
during the summer. What she loves about the sport is that sometimes it can be
so detailed versus times where a team just has to worry about passing, setting
and hitting.

With Wahlers having coached in the area for her entire career, she
has certainly known about Saxony volleyball. She also has family members who
have attended Saxony.

“I wasn’t quite as nervous [taking this job],” Coach Wahlers said.
“I’ve been to schools before and been really, really scared. [Athletic Director
Sam] Sides was my [physical education] teacher when I was high school, so I’ve
known him for years. Just having that connection it wasn’t as scary as what
I’ve been through in the past.”

Coach Wahlers took over the Saxony head coaching job in May, which
is when she started hosting open gyms while the team also played in tournaments
over the summer.

“They’re a great group of girls,” Coach Wahlers said. “They’re very
athletic, and they love the sport as much as I do. They want to work hard and
do their best at everything, so it’s been a great experience.”

Some of the major focuses for the team heading into this season
have been hitting whatever holes the other team is giving on the opposite side
of the court.

Returning to the team from last year’s district runner ups are
Crusaders like seniors Makayla Mueller, Clara Yokley and Olivia Spanley, who
each played in nearly every set in 2018.

Mueller returns as the team’s libero, who was able to come up with
a team-high 469 digs. She was also Saxony’s top server with 187 attempts,
finishing with a serve percentage of 96.3.

Joining Mueller in the back line will be junior Abbi Thomason as
one of the team’s defensive specialists. She recorded 167 digs in her sophomore
campaign. Thomason also recorded the second most assists last season with 41.

Spanley and Yokley each recorded over 100 kills last season as
Spanley finished second behind Morehead with 153 and recorded a kill percentage
of 40.5. Yokley was third on the team in kills behind Spanley with 124 and a
29.7 kill percentage.

Yokley was also able to come up with plenty of digs defensively as
she finished third behind Mueller and Morehead with 292.

“With that much experience coming back, I have a really high
outlook for this year,” Coach Wahler said. “We should be really good — they
work really well together. There’s a lot of camaraderie, so if something doesn’t
go the way they would like it, they’re constantly building each other up.
There’s a lot of team support.”

Barnes, Deckerd and Voelker were the only three on the varsity team
last year as freshman, with Barnes and Deckerd each playing eight sets while
Voelker only saw time in four sets.

Voelker’s older sister, Olivia who graduated along with Morehead,
was the team’s setter and had nearly 600 assists at 594. Olivia also came up
with 192 digs.

“They just are hard workers,” Wahler said. “You can tell they work
on this sport not only during the season but offseason as well. These
sophomores are really going to surprise some people.”

What Coach Wahler is looking forward to the most this season is the
respect, work-hard attitude and willingness to try new things that these
players have. “They’re ready to do whatever you throw at them.”