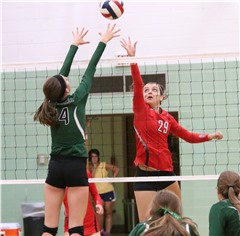 The Indians won the title that year by defeating tournament host Hillsboro 2-1, and Jackson faced the host once again this time around in Farmington.

Jackson lost the first set 25-19 as the Knights defense forced the Indians to tip the ball rather than spike it with their blocking at the net.

Farmington junior Jesse Miller was also a key reason her team took Set 1 because of her aggressive attacks, which allowed her to finish with seven kills in the set.

In Set 2, Jackson took its first lead of the match at 3-2, thanks to a block by senior Olivia Hallet.

Hallet had six kills in the second set, and freshman Hannah Shinn three during Jackson’s eight-point swing, leading the Indians to take a 15-4 lead.

Senior Molly Parker and junior Emily Scott also had two kills of their own during the run, and Jackson eventually won Set 2, 25-13, to force a third and final set.

Jackson took an early 5-2 lead to start Set 3 as Hallet recorded two of her nine kills in the span.

Farmington did not go down that easily since the team got within one and made it a back and forth affair till taking the lead at 10-9 after a 4-0 run.

Neither team had more than a two-point lead the rest of the match, and Hallet was able to lead Jackson to its second three-point swing with a block, spike and a tip.

This allowed the Indians to take a 23-21 lead over Farmington, only needing two more points to reach 25 and win the district title.

The Knights were able to tie the game at 23 all, and both teams went back and forth till Miller clinched the game for Farmington with two-straight kills to win Set 3, 30-28.

The Indians gathered and consoled each other before being presented with the second-place plaque, but Coach Mirly was proud of the resillency his team showed in their final game.

“We had our backs to the wall,” Mirly said. “I thought Farmington played serve, receive, the best game that I’ve ever seen. It gave their hitters an advantage over our blockers because we were late in timing because of that. I felt they kept that up in the second and third set, but a few other things went wrong for them. We passed the ball better, and we were a little bit more ready, so that evened things out in the final two sets.”

Jackson finishes its season with a record of 27-9-2 overall, which is the first time Mirly has led a team in his first year coaching there to an above .500 record.

Farmington lost in the sectional round to Lafayette 2-0 on Saturday for its season to come to an end.