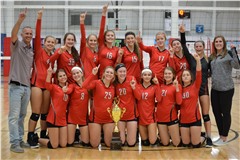 The Jackson volleyball team secured its title of being the best team in the SEMO Conference this season by winning this year’s tournament last week.

The Indians did so by defeating Poplar Bluff handedly at 2-0 (25-10, 25-18) in the conference tournament title match right after a three-set battle with Cape Notre Dame.

“Notre Dame gave us such a challenge — they played phenomenally against us and made everything difficult on us,” Jackson head coach David Mirly said. “… We’re conditioned so well it didn’t bother me to play three tough sets against Notre Dame and come back a few minutes later to play in the championship game.”

The Indians had already won the SEMO North Conference Championship with wins over Cape Central, Notre Dame, Poplar Bluff and Sikeston during the regular season.

In the first set against Notre Dame in the conference tournament semifinals, Jackson was down 11-0 early on to eventually drop that set 25-19. There were a total of 11 ties in the second set against the Bulldogs as the Indians fought back from being down 24-23 to win 26-24.

Notre Dame once again took an early lead in the third and final set at 6-1, but Jackson was able to fight back for a 27-25 win to advance to the conference finals.

Four Indians recorded five or more kills against Notre Dame as Shinn produced a team-high nine followed by the likes of senior outside hitter Mackenzie Stoner with eight, while junior outside hitter Haylee Quatmann and sophomore middle hitter Mia Trankler tied for five.

Jackson and Notre Dame have met in the conference championship match for the last several seasons as the Bulldogs and Indians split the last four title matches. Jackson defeated the Bulldogs in all three matches this year.

Poplar Bluff earned the fourth seed after pool play on Tuesday and was able to advance to its first SEMO Conference Championship game.

The Mules were led by senior middle hitters Kiley Bess and Khelie Spence, who combined for a total of 14 kills against the Indians.

Jackson took a commanding 9-3 lead at the beginning of the first set as Shinn and junior outside hitter Olivia Ward each came up with kills in the span.

Poplar Bluff managed to make it a 4-point game at 9-5 until the Indians were able to outscore the Mules 12-4 for a 22-9 lead after Shinn recorded her fifth kill of the set. She recorded one more as Trankler ended set one with a kill of her own.

“Getting that lead was big because Poplar Bluff was really fired up — it was the first time they had ever been in the championship game,” Coach Mirly said. “They have so much talent and athleticism on their side, and they really wanted to win it. For us to jump on them early really took the wind out of their sails.”

The second set of this match proved to be much closer than the first even though Jackson still managed to take another 9-3 lead at the beginning. Stoner was unable to come up with a kill in the first set, but she managed to record three in a row early in the second.

Miller also recorded a team-high 18 digs in the match as Guilliams paced her with nine.

Guilliams and Stoner, the only two seniors for Jackson this year, finish their careers as two-time SEMO Conference Tournament Champions. The Indians are now hoping to win their first Class 4 District 1 Championship in four years as the No. 1 seed.

“They are going to put 2019 SEMO Tournament Champions on the board at Jackson forever,” Coach Mirly said. “When these girls come back next year, they can look up there and have something to be very proud of that they’ve accomplished.

“Five years from now and 10 years from now when they bring their kids back, it’s still going to be up there. That’s something that no one can ever take away from them.”

Jackson will either face No. 4 seed Hillsboro or No. 5 Poplar Bluff in the district semifinals this evening at 5 p.m. at Cape Central. The district championship game will be played later at 7 p.m., which the Indians have fallen in the last two years to No. 2 seed Farmington.