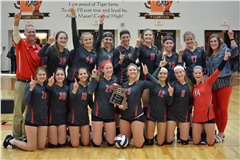 The third time was the charm for the Jackson volleyball team as the Indians faced Farmington in the Class 4 District 1 Championship match for the third-consecutive year.

“It took everything we had [to beat Farmington] — we had to play at a high level,” Coach Mirly said. “We knew Farmington would play extremely well against us — they’ve played their best game in the district championship game the last two years. The difference is our team had a little bit different of an attitude about it, so we were a little more prepared. We just really wanted to win, and it showed out there.”

The Knights were able to defeat the Indians the last two seasons to take home the district title with a 2-0 win last year and 2-1 in 2017.

Guilliams and Stoner served a combined total of 26 times for a perfect serve percentage with four aces as Stoner also came up with a total of nine kills.

Guilliams was one of the Indians top defenders with 15 digs in the contest. Jackson’s junior libero Katelyn Miller recorded a team-high 25 digs.

Leading the Indians in kills for Jackson’s offense was none other than junior middle hitter Hannah Shinn with 10 of her own throughout the match.

Shinn also produced a team-high 14 kills in the semifinals against Hillsboro for the Indians to advance to the district title game.

Stoner, who is a three-year starter for Jackson and will play volleyball collegiately at Evangel University, was understandably “elated” after the victory.

“[This win] took a lot of hard practices,” Stoner said. “We come in everyday at practice, and we’re ready to play. If we weren’t ready to practice, then we wouldn’t be here — we wouldn’t have won tonight.”

The first set against Farmington was back and forth as the final score of 26-24 showed as there were a total of nine ties and four lead changes. At one Jackson trailed the Knights by five points at 22-17, but the Indians eventually came back to take the lead at 25-24, thanks to a kill by sophomore middle hitter Mia Trankler.

Trankler came up with a block on the next play for Jackson to win the set.

“We’re really good at coming together and being like, ‘Hey, good job,’ or if someone messes up, we’re good at explaining to each other how we can fix it without getting mad,” Stoner said. “We can talk about how to fix our errors and that’s a really good thing to have.

“Most of the time if you correct a teammate, they’re going to get mad at you, but we don’t do that.”

This was crucial for the Indians in the second set as they were down 10-1 after Farmington went on a 7-0 run when Knights freshman Jade Roth recorded five kills in the beginning of the set.

Jackson was able to go on a run of its own at 6-0 as Shinn, Stoner, Trankler and junior outside hitter Haylee Quatmann each recorded a kill during the scoring run. This made the score 12-10.

The Indians never trailed by more than four points after the fact and even took the lead at 17-16 after three errors by Farmington.

Roth and fellow freshman Jelena Gray combined for six kills in the rest of the second set for the Knights to eventually win 25-23.

“I get really nervous in the game sometimes, and I’m like, ‘What’s going to happen? Are we going to get to do this?’” Stoner said. “I made a bunch of errors in that second set, and I was getting down on myself. My teammates told me, ‘Hey, don’t get in your own head. You’ve got this.’ They just kept encouraging me.”

In the third and final set, Jackson was able to make quick work of Farmington by going on runs of 7-0, 4-0 and 3-0 twice. Shinn and Stoner combined for a total of six kills in the set. Trankler also added a kill of her own along with two blocks.

“[This win] shows the girls that if they believe and work as hard as they can and earn it in practice, it can come true in a game,” Coach Mirly said. “That’s what happened tonight.”

Stoner said she had no words to describe how she felt about being able to win districts for the first time in her final year as an Indian.