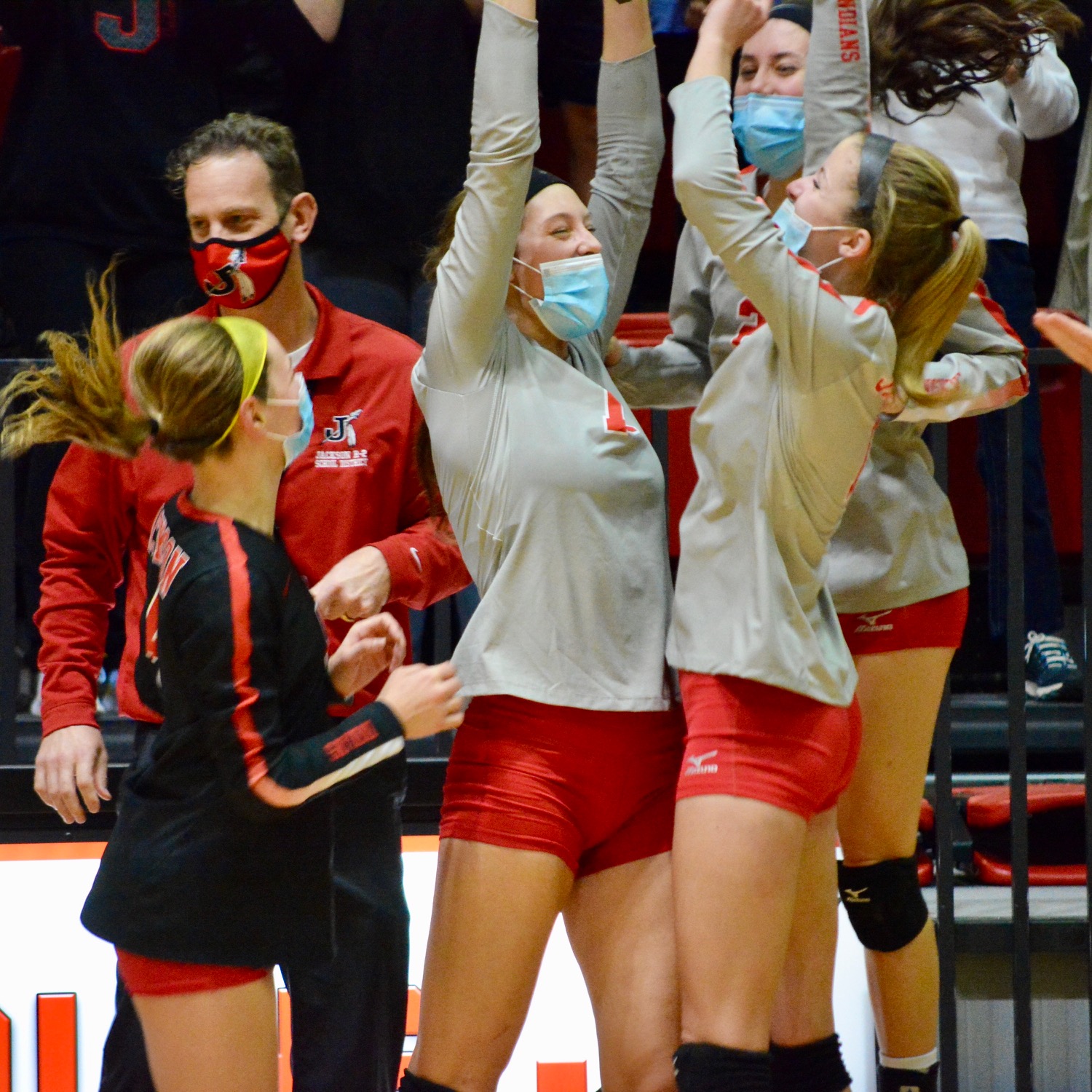 Even though the Jackson volleyball team was moved up to Class 5 this fall, it didn’t stop the Indians from winning their second-consecutive district championship last Thursday night.

“[We won this game] with our heart,” Jackson head coach Dave Mirly said. “Our girls aren’t rattled by the scoreboard. If they would’ve been, we would’ve not even won the first set. [My players] were so tough, and heart and toughness go so far.

“We made a few bad plays in the first set, but no one drops their head. No one gets worried about anything — they just keep grinding. That’s a special group that’s able to do something like that.”

Another Indian to record double-digit kills and multiple blocks was fellow middle hitter junior Mia Trankler as she came up with 11 kills accompanied by two blocks. Also coming up with two blocks was none other than senior setter Madelyn Bourner, who also finished with 41 assists, 16 digs and a perfect serve percentage on 24 attempts.

“Madelyn is just so calm out there all the time,” Coach Mirly said. “It can be the craziest situation, and Madelyn is under control. We need that presence out there like that, and then her setting skills are just phenomenal.

“The way she puts the ball where it needs to be at all the time — we’re very specific and have small windows for her to put it in. She does a great job, and she’s so athletic, too, to get to the balls when they aren’t passed very well.”

Bourner racked up a total of 15 service points and five aces as senior libero Katelyn Miller paced her with 13 service points and two aces of her own. Miller only missed one serve on 23 attempts while finishing with a game-high 41 digs.

“Katelyn Miller was just a beast back there on defense,” Coach Mirly said. “She took away a whole section of the court, and they kept hitting it at her. They should’ve adjusted a little bit better and gone away from Katelyn, but we scouted them real well and kind of knew where they wanted to hit the ball.”

Pacing Miller and Bourner in digs for Jackson’s defense was Ward with nine as well as Guilliams and sophomore outside hitter/defensive specialist Kamryn Link with six apiece.

Along with her perfect night serving the ball, first-year Indian Wasilewski finished third in kills behind Shinn and Trankler with seven. Senior outside hitter Haylee Quatmann was fourth in kills at five.

“We had to battle [at the net] because they shut down our middles at times, and we shut down their middles at times,” Coach Mirly said. “Both teams that was their strength, so it was back and forth. It was fun to watch, and for us to win we had to have Haylee Quatmann, Olivia Ward and Nadia Wasilewski play big for us. When they got their opportunities, they did a lot of big things.”

Jackson had a total of nine runs throughout the match with the largest being 10-0 in the second set when the Indians were able to win by five. Jackson also had four 3-0 runs, two 5-0 runs and one 4-0 run against the Lions.

On top of winning a second-straight district title, this was Jackson’s fourth season in a row with 26 or more wins by finishing with an overall record of 31-5-1.