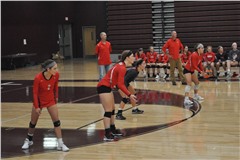 Following a two-game stretch on the road, the Jackson volleyball team hosted its second game of the season Thursday, Aug. 24, where the Indians faced Hillsboro.

The Indians only trailed twice in the game, both times coming in the beginning of each set before Jackson would take the lead for good.

This does not mean Hillsboro wasn’t able to make the contest a close one as the Hawks were within two points of Jackson for most of the first set.

“We maintained our composure throughout the entire game,” first-year head coach David Mirly said. “Hillsboro is a good team, and we were able to make a lot of good plays, and get a little bit of a lead a couple times.

“The good thing is when [Hillsboro] went in their runs, it was them making plays. It wasn’t us just handing it to them, and then we did hold our composure and found ways to get a point here and there. It was a good learning experience for us.”

Hillsboro was forced to take two time outs in the first set both times Jackson was up by five. The final one was called after a 3-0 run by the Indians for a 21-16 lead over Hillsboro.

This time out allowed for the Hawks to go on a 4-0 run, thanks to two kills provided by sophomore middle hitter Grace Ringling.

Jackson called its first time out of the game after this run, and they eventually won the set with back-to-back successful spikes by senior outside hitter Olivia Hallet.

One major reason why Jackson was able to keep the lead throughout, besides the team’s 92 percent serve percentage, was its defense.

The Indians had a total of 43 digs against the Hawks, with Hallet and junior outside hitter Hannah Wilson tying for a team-high 11.

“Our defense started showing some identity tonight of being relentless, which was great,” Coach Mirly said. “Hannah stepped in — there were a few balls smoked at her, and she was able to pick them up. There were a couple of rallies where we didn’t have much of a chance of saving it, but our girls are starting to get the identity of nothing is going to hit the ground on their side.”

Wilson also had one of the more impressive hits in the game, leading to a Jackson score, which came in the beginning of the second set.

Two hits had already been made by Jackson, and the ball was traveling seemingly out of bounds, but was still near the baseline.

Wilson sprinted to the ball where she was able to make a play, hitting the ball all the way across the court to Hillsboro for a score.

“They’re going to go after everything, and that showed tonight several times,” Coach Mirly said. “It really bothered Hillsboro because a couple of times they thought they had the points, and we kept sending it back to them.”

Offensively, Olivia Hallet led the Indians with a total of 12 kills off 32 total attacks. As a team, Jackson had a kill percentage of .344, and senior setter Lainey Broussard was 4-for-4 on the night.

Broussard scored all of her kills with tips off fake sets, which Coach Mirly said he has been having her work  extensively on in practice. Broussard also had a team-high 19 assists in the game.

“In order for us to be good, Lainey has to be a part of our offense, which means she needs to be able to tip,” Coach Mirly said. “We’ve been working a lot on that, and she’s getting better at it. We also know that our hitters, with as small as we are — there’s going to be big blocking teams, and we have to tip on them.”

This is one of the key parts in Jackson’s offensive strategy because it forces opposing teams to guess how the Indians are going to attack the ball.

It was also something vital for Jackson to do against a team like the Hawks, who had several blocks throughout the night.

The Indians led by as many as eight points in the final set of the night at 18-10, but Hillsboro was able to bring the game within three points at 18-15, via a 5-0 run.

Hillsboro hit the ball out of bounds twice in-a-row following the run, which allowed for Jackson to a 4-0 run itself, thanks to two kills, one from Hannah Wilson on a tip, and a serve for a score by junior defensive specialist Sophie Crabtree.

This all but clinched the game for Jackson, and Wilson finished the game with a tip for a kill to seal the Indians third overall win.

“We just want to keep improving — we feel like we are 3-0 in 50-50 games,” Coach Mirly said. “The St. Vincent, Poplar Bluff and Hillsboro games could’ve gone either way. Dexter is a little bit better than us right now, so to be 3-1 right now is a great place to be.”

Another great thing Coach Mirly is a witness to is the team chemistry the players on his team have right now. Team bonding is one of his focuses for any team he coaches, so for that to be paying off right now is something that will be important down the road.

“It’s nice that our girls believe in each other, and they believe in themselves, so it’s nice they’ve bought into that,” Coach Mirly said. “As long as they remember that when times get tough, that’ll help them pull through.”

Jackson has only two games, which will be on Sept. 5 and 6, before the team plays in its first tournament of the season.

Both games will be on the road, starting against SEMO Conference rival Cape Central (1-2) and Seckman, which they could play against at the SEMO Dig for Life Tournament starting Sept. 8.