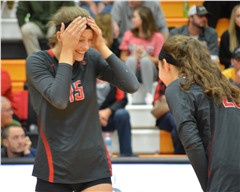 In 2019, the Jackson volleyball program had one of its most successful seasons in school history in what was head coach David Mirly’s third season at the helm for the Indians.

Jackson won both the SEMO Conference Regular Season and Tournament Championship while also coming away with the Class 4 District 1 title for the first time since 2015. The Indians also did not lose a match at home and finished with an overall record of 28-9-3.

Last year’s theme was “We sweat the small stuff” as Coach Mirly and the team never discussed winning or losing. Jackson instead focused on heart, desire and determination along with “25 other small things.”

“How true is that,” Coach Mirly said. “If I can get my volleyball team to walk in the door and volunteer to do all those little things I forced them to do last year — if they do that on their own, they’re going to buy in.

“That is what’s bringing a lot of excitement [in our program] because it’s not me making them work hard, have great attitudes and be supportive, encouraging and enthusiastic. It’s them doing it because they want to.”

Another reason for the Indians to be excited and very well could repeat their success from 2019 is because they return a total of six players who earned all-conference honors and five who were named all-district.

One of those returning all-conference and all-district members is none other than senior middle hitter Hannah Shinn. Shinn was named the 2019 SEMO Conference Player of the Year after recording 232 kills (.36 kill percentage) and 66 blocks.

“The bar is so high for Hannah, and it’s high because she’s placed it that high,” Mirly said. “She’s been a big part of our offense since her sophomore year. It’s nothing she can’t handle — she’s looking forward to the challenge. I’m excited to see what she can do, and I’m glad when she’s hitting that I’m not on the other side of the net.”

Other returning hitters that earned postseason accolades for the Indians last season include senior outside hitters Olivia Ward and Haylee Quatmann. Ward earned all-conference and all-district while Quatmann was named all-conference.

Ward finished third overall in kills last season with 153 behind Shinn and 2020 graduate Mackenzie Stoner, who is now playing volleyball collegiately at Evangel. Stoner was a player who rotated between the front and back line last season, and Coach Mirly believes Ward could do the same this year.

“She’s every day competing to play six rotations, and we all know of course she is a great front row hitter already,” Mirly said. “Liv has really improved over the summer, and you’re going to be amazed by how much better she is. We’re going to be giving her the ball a lot more this year.”

Quatmann was one of the five Indians to finish with more than 100 kills as she produced 114 while also coming up with 45 blocks.

Jackson’s leader in blocks was junior Mia Trankler with 69, who will return to the middle of the Indians front line alongside Shinn. Trankler finished fourth overall in kills with 131 but managed to have the best kill percentage among all hitters at .448.

“Mia would have been the best player on a lot of teams last year,” Mirly said. “With all the good players that we have here, she didn’t get a lot of postseason recognition. She’s so big for our offense — there were games last year where she carried us to wins.

“She’s by far our best blocker on the team, and she actually loves blocking. We’re working on taking that love for blocking and transitioning her to become a great hitter also so we can get her more sets.”

Setting the ball to these Indians will be the returning SEMO Conference Setter of the Year senior Madelyn Bourner, who recorded a total of 802 assists last fall. Bourner was named all-district as well while finishing with 64 kills (.484 kill percentage) and had 198 digs and 179 service points.

The final player for Jackson returning with all-conference and all-district accolades is senior Katelyn Miller, who will be in her second year as the starting libero. Miller, who has verbally committed to play soccer at Southeast Missouri State, came up with a team-high 411 digs as a junior.

“We didn’t realize how important Katelyn was last year until she got hurt and missed three or four games,” Mirly said. “She really is the heartbeat of our team. She of course is a phenomenal talent getting all of those digs, but then also her leadership and personality makes everyone else feel comfortable.”