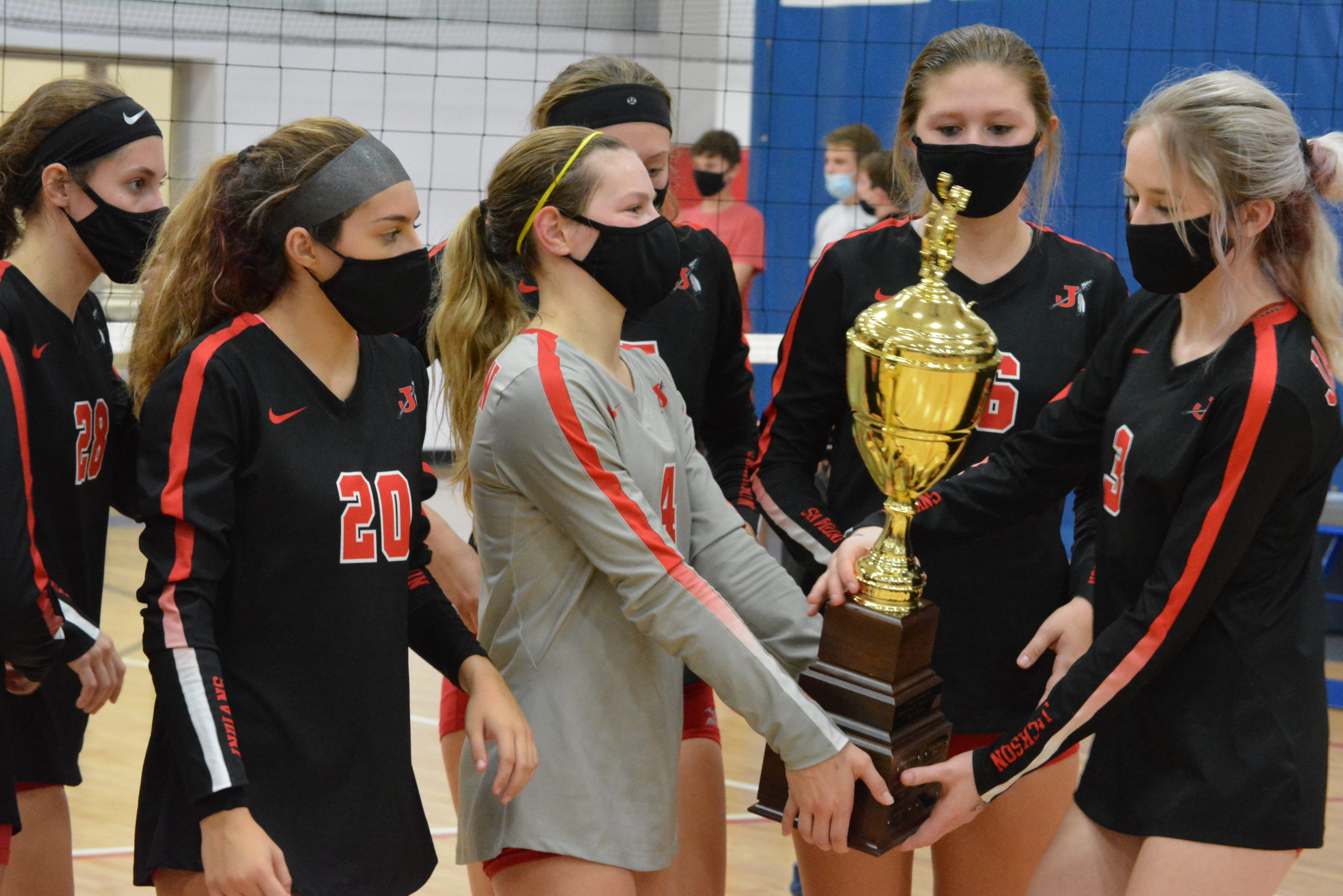 For the first time in program history, the Jackson volleyball team was able to win the SEMO Conference Tournament Championship for the second-straight time last week.

“I’m so happy for [my team] — they had to overcome so many obstacles,” Jackson head coach Dave Mirly said. “With COVID and the uncertainty of everything going on, we had to wear masks tonight, which the school said we had to do to play.

“It made it a little bit harder to breathe, but never once did any player make an excuse about it. The heart that these girls have is unbelievable.”

Jackson was led by none other than the reigning SEMO Conference Player of the Year in senior middle hitter Hannah Shinn, who recorded a team-high 14 kills and seven blocks. Shinn finished with a total of 34 kills in the tournament and currently has a career-high 319 this season.

Another Indian to have a big night at the net was junior middle hitter Mia Trankler as she paced Shinn in overall kills with nine off 12 attacks (75% kill percentage).

“[Shinn] just battles — she and Madelyn [Bourner] are on the same page all the time,” Coach Mirly said. “They’re constantly moving Hannah around at the net, so if she does get blocked or even touched, she’s going to run something different.

The Indians scored a total of 32 service points as senior setter Madelyn Bourner and junior defensive specialist Alexa DeLuca, who each tied for a team-high 11 service aces. Both players also recorded 10 or more digs as DeLuca finished with a game-high 14, who also finished with a perfect serve percentage (17-of-17).

Bourner finished with a game-high 29 assists as she came up with a total of 92 in the bracket portion of the conference tournament. She also finished with 28 digs.

Two other Indians to have big nights defensively were senior libero Katelyn Miller and freshman defensive specialist Holland Guilliams. Miller finished second on the team in digs with 12 as Guilliams paced her with four. Both players had a serve-receive total above two as Miller finished with a 2.67 and Guilliams at 2.29.

Two other freshman have figured their way into the rotation in outside hitter Nadia Wasilewski and defensive specialist Grace Newell. Wasilewski finished third in kills for Jackson with seven and also had one block.

In the semifinals against Cape Central, Wasilewski tied for a team-high 13 kills with Shinn in a game that went all three sets right before the championship match. Trankler also had double-digit kills at 10 as Jackson came out on top 2-1 (24-26, 27-25, 25-18) over the Tigers.

“It’s easy to have a let down after having our backs to the wall against Cape, and we did have a little bit of a let down against Notre Dame, but they played really, really well,” Coach Mirly said. “I thought our conditioning really paid off. They got a little tired in that second set, and I felt like they were really tired in the third set.”

The second set between Jackson and Notre Dame was a back and forth contest until the Indians were able to go on a 5-0 run after the game was tied at 10-all. Wasilewski had two kills in the run as senior outside hitter Haylee Quatmann had one as well. This was followed by two more 3-0 runs as Shinn was able to seal a 10-point win in the second set with a kill.

“[The 5-0 was the difference] because it gave us a chance to relax,” Coach Mirly said. “We were a little uptight and played tight against Cape for most of the first and second set.

“When we got that 15-10 lead, we were finally like, ‘OK, now we just relax and play.’ We were trying to force the issue and press a little bit too much just because they wanted to win so badly.”

Jackson started the third and final set with a dominant 7-0 run as Shinn recorded three kills in the span, while fellow senior outside hitter Olivia Ward had two of her own. Shinn finished with a total of eight kills in the set for the Indians to win 25-12.

The Indians now have their eyes set on winning a second-straight district championship in the Class 5 District 1 Tournament this week, which they will host at the Event Center.

Jackson earned the No. 1 seed and will face Poplar Bluff (8-21-4) in the semifinals on Tuesday. If the Indians win, then they will either play Northwest (19-5) or Seckman (12-4) for the district title 6 p.m. Thursday.

“[My players] truly have the heart of a volunteer,” Mirly said. “Everything you see out here on the court — their energy, enthusiasm, excitement and hard work — I don’t make them do that. They volunteer to do that.”