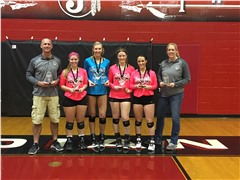 On Sunday, Dec. 3, 24 senior volleyball players from southeast Missouri were able to play in one last game.

“For many years, a company down in Dexter used to run an all-star game for boys and girls basketball and volleyball,” Mirly said. “It was a great event because it let the athletes play their sport one more time.”

These all-star games ended while Mirly was still coaching at Perryville, so once he accepted the job at Jackson, Mirly made it one of his priorities to bring the game back.

Mirly knew he could not run the all-star game when he was at Perryville because of proximity, but now this volleyball showcase will be hosted at Jackson each year.

“It’s great for the girls because volleyball takes a backseat to football and sometimes soccer, which I’m not complaining about. It’s just reality,” Mirly said. “I just do everything I can to promote this sport because these athletes do work extremely hard — just as hard as all the other sports do.”

For the game, head coaches from the area nominated their seniors to be selected, which was then compiled into a list to be voted on by the coaches.

The top 24 seniors and top six coaches who were voted to compete made up two teams, which were formed by a snake draft. The coaches were picked out of a hat to determine what team they would be coaching.

Mirly was drawn to coach for team Pest Free along with Advance’s Erin Hoffman and Bloomfield’s Haley Silman.

This meant Mirly had the chance to coach his lone senior in the showcase one last time, and that was John A. Logan signee Olivia Hallet.

Hallet and Mirly each garnered top awards following the game with Hallet being named Most Valuable Player and Mirly earning Coach of the Year along with Hoffman.

Bloomfield’s Kaley Roper won Libero of the Year with Cape Notre Dame’s Brooke Blankenship being selected as Server of the Year.

Blankenship, Roper and Williams were teamed up with Hallet on Pest Free, but Thurman and the Creative Edge team took the match 4-1.

There were five sets in this match because this all-star game follows the same format college uses, which is playing three out of five sets.

All five sets were played in the showcase regardless of how the first four sets went so each player could get a sense of playing collegiately.

“I thought it went really well,” Mirly said. “Everybody who came, whether they were an athlete, a fan or a family member really enjoyed it. They thought it was a great event, and they loved the way it was set up and run. I was very thrilled about that.”

Coach Mirly reached out to several college coaches before the showcase, but only one coach accepted the invitation, John A. Logan’s Bill Burnside.

Coach Mirly says he intends to reach out to even more college coaches next year in hopes of more players earning scholarships to play at the next level.

Three players in the showcase, Hallet, Advance’s Alanis Below and Krista Rhodes of Woodland, already signed with John A. Logan prior to the game, but Coach Burnside came to the game with more scholarships to give.

“[Burnside] immediately marked it on his calendar to come down here,” Mirly said. “He was very impressed with several of them, and two, possibly three girls got offered to play collegiately.”