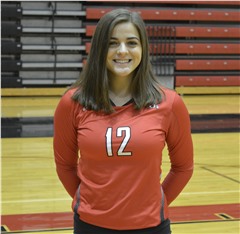 In David Mirly’s first year as the Jackson volleyball team’s head coach, the Indians were able to win the SEMO Conference Tournament, reach the Class 4 District 1 Championship game  and finish with an overall record of 27-9-2.

When Coach Mirly enters a program, his goal for year one is to go with the flow and introduce his ideas. The second year is when Mirly wants the team to play the way he wants it to. The third year is when he has the players practice to his liking.

“With my first year, we tend to not have a winning season. My second year we tend to start turning a corner and then my third year we’re, usually really good,” Coach Mirly said. “The seniors decided to accomplish the first two [steps] in one year last year, so now [this team] wants to go to step three.

“Coming in the first year, you never know what really to expect,” Mirly said. “It wasn’t as hard of a challenge to have the team buy-in as I thought it would be, which helped lead to our success.”

In the first day of tryouts on Aug. 6, Mirly said his team was able to have a better practice than all of last year because the players are now in the third step of practicing harder.

The leader in kills for Jackson last season was senior Olivia Hallett, who is now playing for John A. Logan Community College. She was named SEMO Conference North Player of the Year.

Wilson played in the front and back row throughout last season, but she will be the team’s starting libero this year, which happens to be her natural position. This will be her fourth year starting on the varsity team.

“We expect huge things out of her,” Mirly said. “She’s an extremely great talent on the volleyball court — no game is too big for Hannah Wilson. She’s been all over the country playing volleyball, so we’re really excited about what she can do.”

Mirly said Wilson has even started to step out of her comfort zone by becoming a team leader vocally instead of just the work she puts in during practice and games.

Jackson will run a 5-1 formation with Broussard leading the attack once again as the team’s setter, who displayed plenty of athleticism last season.

“Even when we don’t pass the ball very well, she still gets to it and puts up a really good set,” Mirly said. “What we lack in passing at times she makes up for it in her athleticism. She just hustles all over the place and has great enthusiasm and competitiveness for the game.”

Broussard is also able to lighten the team’s mood when things might not be going Jackson’s way.

Mirly said it was an easier situation for Broussard last season since all she had to do for the most part was place the ball high for Hallett.

“This year she has to get the ball to every one of our hitters where they can be successful,” Coach Mirly said. “It’s going to be more challenging for her, but she loves challenges, and she knows that’s what she has to work on and do a better job. If she can get the hang of that and know all of our hitters, we have a chance to be really, really good.”

Mirly is confident wherever Scott lines up that she is going to do well and will produce, and he’s also glad she knows both positions because he can move her around.

Over the summer, Jackson played in 50 games where Stoner was able to see time on the left side in the middle of the front row, Mirly said she did very well at both spots.

“She played some varsity last year, so she’s got that varsity experience,” Mirly said. “She’s going to be really good coming up for us this year and next. I’m excited to see how much better she gets because she puts in a lot of effort and just loves the game.”

Juniors Piper Guilliams and Kaitlyn Scott are two players who made the move to varsity this season. Scott played club volleyball over the summer while Guilliams helped lead the girls soccer team to state in the spring.