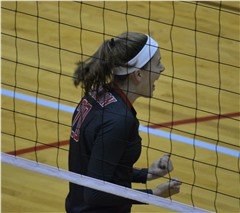 Heading into the Jackson volleyball team’s match against Class 4 District 1 and SEMO Conference foe Poplar Bluff Sept. 4 at home, the Indians had yet to drop a set.

The Mules ended this streak for the Indians as they took set one 25-22, which included a total of six lead changes and eight ties.

“Our game plan was to make sure we attacked them off the serve and our hits, and to use our fast-paced offense to dictate the tempo,” Jackson Head Coach David Mirly said. “Instead we free balled it back to them so they could control the tempo and use their big, powerful hitters against us.”

The Indians defense was still able to keep balls alive to prevent scores and create passes even though they weren’t able to control the pace of the set.

One defender who stepped up to the occasion throughout the match for Jackson was none other than senior libero Hannah Wilson, who recorded a team-high 13 digs.

Jackson (4-0) only trailed one more time throughout the match in the first of the second set down 1-0 to Poplar Bluff (2-2).

The Indians won set two handedly at 25-17 by taking a seven-point lead six times throughout.

“[Poplar Bluff] made a lot of unforced errors, which gave us some breathing room and made us feel more comfortable,” Mirly said. “I thought our crowd was really a big help for us tonight. It made for great energy in the gym — we could not have done it without them.”

One of the keys for Jackson in the set was the team’s front line as sophomore Hannah Shinn helped secure the middle and junior Mackenzie Stoner moved to the outside.

Shinn and Stoner led the Indians in kills as each recorded a total of nine in the match as Stoner was able to record three to help Jackson take set two.

“We normally run [Stoner] out of the middle, but we switched her and Emily [Scott],” Coach Mirly said. “I saw something, so I just went with it, and it really paid off tonight.”

Scott also was able to record a team-high three blocks after her move to the middle as Shinn was behind her with two.

Another key for Jackson was senior setter Lainey Broussard, who recorded a game-high 23 assists while producing 10 digs.

In the third and final set, Jackson jumped to a 4-0 lead over the Mules and managed to hold the lead until the last half of the set.

Poplar Bluff got within one point of Jackson at 16-15, causing Coach Mirly to take a time out.

“We get up to a nice lead and here they come storming back,” Mirly said. “When it was 22-18, I’m yelling on the sidelines, ‘Don’t back down. Keep fighting and get this point.’”

The Mules were able to tie the game twice before the end of the match, first at 17-17 and then 18-18 until the Indians were able to go on a 5-0 run sparked by a kill from Stoner.

Aces from junior Piper Guilliams and senior Autumn Gragg helped the Indians finish off Poplar Bluff to win the third set 25-19 and take the match 2-1. Scott led Jackson in aces with six.

“I was hoping our serving would play a bigger part in it, but I felt Poplar Bluff passed the ball extremely well tonight,” Mirly said. “That made it look like our serving didn’t do as well, but then the consistency of our tough, aggressive serves started to wear them out. Throughout the night, it was an advantage even though early on it wasn’t that big.”

The lone set the Indians lost against Poplar Bluff still stands as the only one they have lost this season.

On Sept. 6, Jackson traveled north to face another district opponent Hillsboro, which the Indians were able to defeat 2-0.

Shinn led Jackson in kills once more with 10 as Scott and Stoner finished with five apiece. Broussard recorded 23 assists once again as Wilson came up with one more dig at 14, bringing her season total to 46.

Shinn, who is the only sophomore starter for Jackson, along with hitters like fellow sophomores Olivia Ward, Haylee Quatmann and defensive specialist Katelyn Miller have been able to bring a new energy to the team.

“They’re so youthful, and they’ve never been in a game like this tonight with this much pressure with conference and districts,” Coach Mirly said. “They grew up tonight, and when things didn’t go well, they didn’t lean their head. They were just ready for the next play, and that shows they’re going to be really, really good players very soon.”