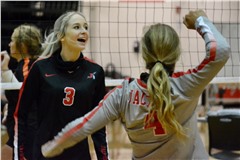 One year after winning both the SEMO Conference Regular Season and Tournament Championships, the Jackson volleyball team is currently one conference win away from repeating as regular-season champions.

The Indians picked up their third conference victory of the season with a 3-0 (25-22, 25-13, 25-23) sweep of rival Notre Dame last Thursday night at the Event Center. This was the Bulldogs (9-2-1) first loss of 2020, while Jackson suffered its first loss to Advance Saturday.

“We really did step up because it’s Notre Dame, and they’re always going to play us tough,” Jackson head coach Dave Mirly said. They’re going to give us one of their best games of the season, and they did that tonight. Our girls responded great, but we definitely could’ve played better as we showed in that second set kind of what we’re capable of.

“When it came down to crunch time, our girls made plays after plays. Even if we messed up down the stretch, we were able to bounce back and make some plays.”

Jackson was led by a dominant performance from its front row as the team combined for a total of 13 blocks along with 37 kills. Recording a team-high three blocks was none other than the 2019 SEMO Conference Player of the Year and senior middle hitter Hannah Shinn, who also finished with nine kills against the Bulldogs.

“[Hannah] can split blocks, and Madelyn [Bourner] is such a huge reason why Hannah is so good,” Coach Mirly said. “She’ll put [the ball] on her right shoulder, or she’ll put it on her left shoulder depending on where the blocks are coming from so all Hannah has to do is swing. They work so great out there together, but Hannah is just a special hitter.”

Leading the Indians in kills was fellow middle hitter junior Mia Trankler as she came up with 10 while also coming up with two blocks. Four other players for Jackson recorded two blocks as they were senior outside hitters Haylee Quatmann, Olivia Ward, freshman outside hitter Nadia Wasilewski and senior setter Madelyn Bourner.

“Mia Trankler was huge for us tonight. She got kill after kill after kill, and they couldn’t stop her” Mirly said. “It’s like they focused so much on Hannah Shinn. When Hannah got out of the game, they kind of relaxed and didn’t realize Mia is really, really good also. Down the stretch, we made sure we went to Mia because she’s having such a strong game.”

Quatmann and Wasilewski each finished with five-plus kills as Haylee produced seven while Nadia was right behind her with six. Ward was the final Indian to have multiple kills at four.

Bourner, who was named the 2019 SEMO Conference Setter of the Year, led the Indians in assists with 39 as she has already produced 194 through six games.

“Madelyn does such a good job of giving up the sets to everybody,” Coach Mirly said. “[Defenses] don’t know where [the ball] is coming from or where it’s going to go to. It’s a great strength of ours — we have so many weapons every night, which is just a blessing.”

Defensively, Bourner finished with the second-most digs at six behind Jackson’s senior libero Katelyn Miller.
Bourner was also the top server in the contest for the Indians with a 96% serve percentage along with 20 service points and two aces. Jackson finished with a serve percentage of 82% as four Indians didn’t reach 60%.

“All three of our freshman that play [varsity] do a phenomenal job handling it. I know they’re going to make freshman mistakes, and we all know it. The team is so great at letting them grow out there when they need to grow.”

Miller produced a season-high 19 digs and helped Jackson hold Notre Dame to just 13 points in the second set. Also coming up with multiple digs were defensive specialists junior Alexa DeLuca and Holland Guilliams, who finished with five and three, respectively.

“Our defense was phenomenal. We were all over the place and keeping balls alive,” Mirly said. “Blocking got better and better as the game progressed — we started out pretty well and it only got better.”