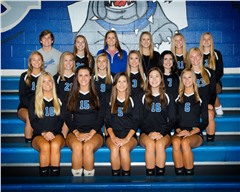 Cape Notre Dame’s volleyball team has not won a district
championship and advanced to the state playoffs since 2015, but third-year head
coach Meredith Brinkmeyer believes this year’s team is ready to do so.

Even though the Bulldogs failed to win more than 20 games for the
first time in this decade last season, they still won the SEMO Conference
Tournament Championship and reached the Class 3 District 1 title game.

“The girls have been super excited and ready [to get the season
started],” Coach Brinkmeyer said. “We’re going to focus a lot on defense. We
have a good crew returning from last year — a number of people that played for
us. [Finishing second in districts] has kind of got their energy up.”

These three all-conference players accounted for a majority of the
Bulldogs digs last season with their libero, Heisserer, recording a team-high
459. Essner finished second behind her with 232, while Dodson finished with
199.

Hoping to replace those digs will be players like senior Maggie
Eby, who will take over as the libero, along with two defensive specialists
from Notre Dame’s undefeated junior varsity team in juniors Emma Burger and
Delaney Dohogne.

“I have no worries that they can do it,” Brinkmeyer said. “It’s
definitely a jump coming from J.V. to varsity. We did get to play in some
shootouts this summer, and I was just impressed with how they handled
themselves playing against those varsity teams. Just kind of the pace of the
game they caught up with it, so I’m really excited to see what they can do.”

Eby was unable to play at libero for Notre Dame last season of
course because it was Heisserer’s spot, but she was able to see varsity time by
playing in 45 sets and recording 78 digs. She also helped lead the Bulldogs to
the district finals.

Notre Dame had two other players named SEMO All-Conference, which
were hitters senior Alexa Clark and sophomore Rylee McClintock. Clark was named
the SEMO Conference North Hitter of the Year after recording a team-high 275
kills along with a kill percentage of 39.

Clark also recorded a team-high 51 blocks and was one of the team’s
top servers with a 92.5 serving percentage on 200 attempts.

“I mean she looks good [heading into this season],” Brinkmeyer
said. “Especially in our last shootout, I felt she was very solid. She kind of
just gets the girls going in practice by making them work hard. I’m very, very
happy to have her returning this season, and I think she’s very ready for her
senior year.”

McClintock will return as the Bulldogs middle hitter since Clark
has adapted as an outside hitter. Near the end of last season Brink-meyer took
Clark out of the middle spot, who responded by saying, “If you need me to, I
can hit outside.”

“I think [Clark] can have a little more movement on the outside,
but she can hit anywhere I need her to,” Brinkmeyer said. “If I need her to
stay at one position, she can hit right side or middle. She’s very flexible of
where she can hit.”

Brinkmeyer said she has seen improvement from McClintock over the
summer after playing all 65 sets last season. She finished second on Notre Dame
in kills behind Clark with 113 with a 29.4 kill percentage, while coming up
with 78 digs and 16 blocks.

Another freshman who played in the Bulldogs front line last year
was sophomore Lexi Rubel, who finished with 36 kills and a kill percentage of
27.7. She also had 41 digs.

Notre Dame’s third leader in kills will be returning this season in
senior Grace Landewee, who recorded 80 with a 33.6 percentage. She also paced
Clark with the second most blocks at 46.

Fellow senior Natalie Timpe will also work in the front line after
coming off a junior campaign where she recorded 34 kills, 18 digs and 11
blocks.

There are also a few players from last year’s undefeated junior
varsity team who will rotate in the front like juniors Abby Hulshof and Mary
Dirnberger.

Setting for the Bulldogs this season will be sophomore Sarah
Brennan, who recorded 60 assists last year.

Notre Dame fell to Jackson in the conference tournament title match
in 2017, but the team was able to defeat the Indians for last year’s trophy.

“They were beyond excited [to win that tournament],” Brinkmeyer
said. “I knew they could do it all the time, but we just kind of had to almost
figure out where we needed to be. I feel like it kind of built their confidence
up especially going into districts. This year they don’t want to lose it.”