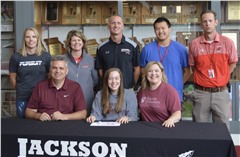 Before entering her final season with the Jackson volleyball team
this year, senior Mackenzie Stoner officially signed her National Letter of
Intent with Evangel University last week to continue her career at the next
level.

This was after a junior campaign where Stoner garnered SEMO
All-Conference honors by leading the Indians in blocks (52) and aces (42).
Jackson finished with more than 25 wins for a second-straight year at 26-9-2.

Many people were in attendance to celebrate Stoner’s signing
ranging from family members, friends, coaches and members of her church.

“Oh wow — I’m so thankful that everyone could come,” Stoner said.
“I’ve been talking to them about it for a while. My church family has been a
big part in helping me with everything. As it started getting closer, I was
like, ‘Hey, I would love for you guys to come.’ And then my friends were like
freaking out, ‘Are we going to be able to come?’”

Stoner has known about Evangel for a while because of it being
known as a “good Christian school.” Stoner realized last year the university
would be somewhere she’d enjoy playing.

Stoner filled out Evangel’s online recruiting form and emailed the
head coach, Mary Whitehead, which led to Stoner trying out for the team this
summer.

“[Whitehead] was like, ‘Wow, I’m so impressed. You did a great
job,’” Stoner recalled. “A few weeks after that, she emailed me and was like,
‘This is how much [scholarship money] I’m going to give you. We’d love for you
to come play.’”

Stoner started playing volleyball in third grade and her dream to
play in college developed later on when she was in sixth grade. She said she
loves the sport so much because it’s been a part of her whole life.

The reason why Stoner started dreaming of playing college
volleyball in sixth grade was because she attended a camp at Missouri State,
where she fell in love with the atmosphere.

“[Signing my national letter of intent] was just amazing,” Stoner
said. “I don’t know how I haven’t cried, so I’m just waiting for the tears to
come. God has helped me through all of it, and I just can’t be more thankful.”

Stoner will focus on playing right side hitter at the college
ranks, but she has become Jackson head coach Dave Mirly’s utility on the court
at Jackson. This is because Stoner is not only able to play in the front line
but also in the back as a defensive specialist.

When Stoner reached junior high, she also played basketball but
decided to drop the sport in high school to put all of her focus towards the
one she loves the most.

“I’ve had some great coaches between Coach Mirly, Yinkon [Her] and
[Maile] Gannon,” Stoner said. “They’ve all helped me in different ways, and
it’s just been a great blessing to have all of them. My skill has just come so
far — even in this past year I’ve really stepped up and put a lot of work in.”

Mirly took over the head coaching job at Jackson before Stoner’s
sophomore year in 2017, and since then he has helped guide her by being tough
on her. Stoner said he  does this by
“nagging on every little thing.”

“I could like barely miss a ball and he’d be like, ‘Mackenzie,
don’t do that,’” Stoner said. “I’d be like, ‘OK, what do I need to do to get
better?’ I’d talk to him, and he’d explain to me how I needed to fix the little
things. That’s always been a thing for me. If you explain to me what I need to
do, I can fix it.”

Because of this Stoner now knows all of the little things she can
fix in her game to become the best possible player. She also gives credit to
her club coaches for guiding her the same way.

Last season on top of leading Jackson in aces and blocks, Stoner
finished second on the team in kills (192) and third in kill percentage (26.5%)
among starters. She also served the ball a team-high 156 times with a serving
percentage of 94 along with recording 47 digs.

Stoner embraces being a versatile player for Jackson because she
has had success before in each spot. Stoner also wants to do whatever she can
for her team to win.

“I started out playing as a setter, and I enjoyed it because I told
everyone like what they were hitting,” Stoner said. “After that when I came
into high school [my coaches] were like, ‘Hey, we really think you should be a
hitter. You’ve really grown.’”

Between Stoner’s eighth grade and freshman year, she grew three
inches taller and currently stands at 5-foot-11. She is tied with four other
Indians — juniors Haylee Quatmann, Hannah Shinn, Olivia Ward and sophomore Mia
Trankler — as the tallest player for Jackson.

Stoner loved being a hitter from the get-go, and she has played in
the middle, outside and on the right side throughout her career. Outside is
Stoner’s favorite spot because players have more chances to “power down on that
ball.”

Stoner enjoys playing in the middle because of all the different
sets players run at the position. At right side hitter, Stoner has fun playing
the position because most people are left-handed that play it, and she is
right-handed. This allows her to cut different ways as well as do different
things from the spot.

“[Stoner] is so self motivated,” Coach Mirly said. “She loves the
sport of volleyball, and she dedicates a lot of time to it. It’s a great reward
for her to get this opportunity to play at the next level. So few athletes get
that opportunity, and as hard as she’s worked we’re confident she can go there
and make an immediate impact.”

Off the volleyball court, Stoner will be studying early education
with a minor in children’s ministry because it’s been her calling since she was
little. She said she loves working with kids and has had plenty of chances to
do so through her church.

“When I was little, I would always help in kids church,” Stoner
said. “… About a month and a half ago, I started leading the whole service at
church in the kid’s ministry. I can just see how God works through all of the
kids, and it just brings me so much joy.”