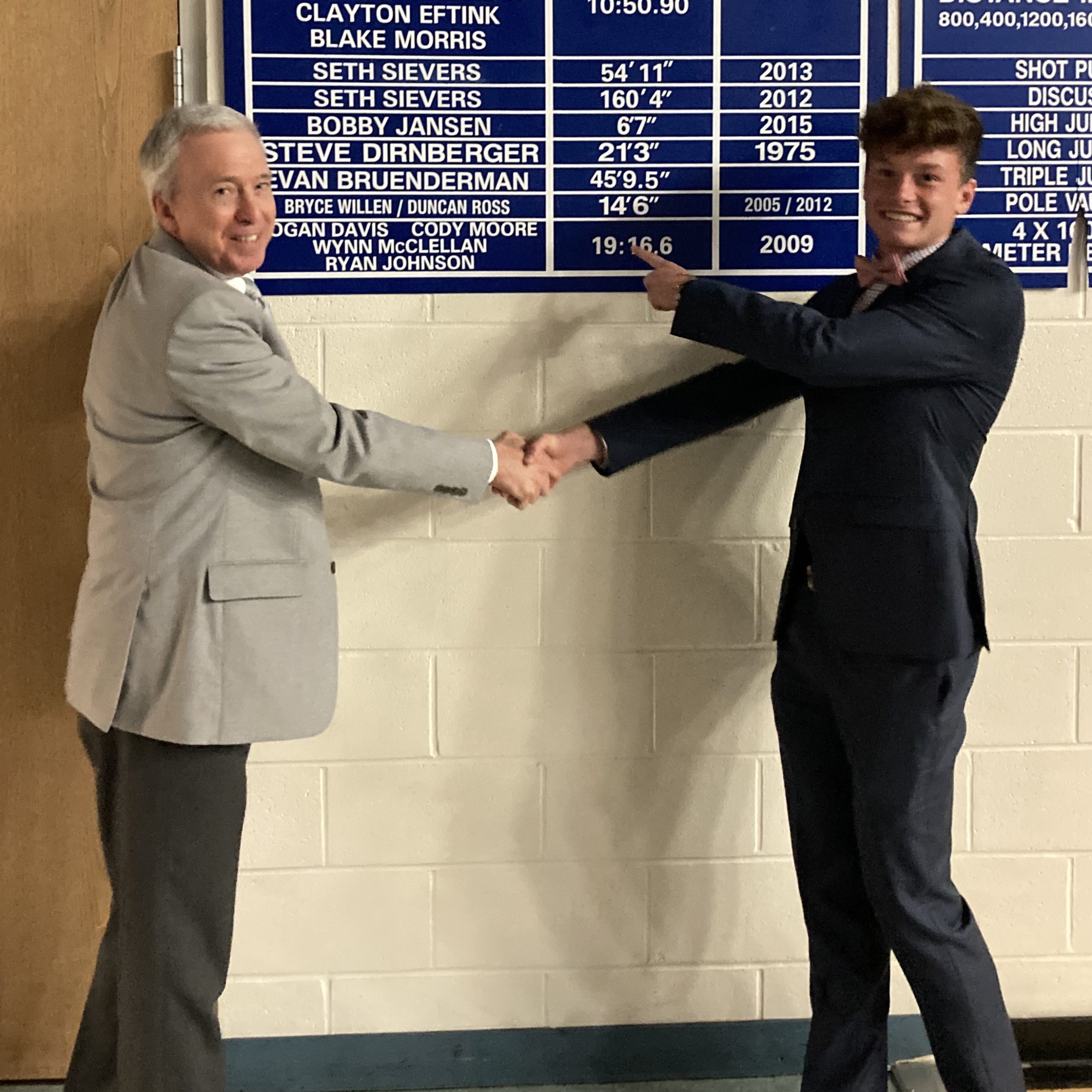 Even though neither of Notre Dame’s track and field teams won the overall SEMO Conference Championship on Saturday, both teams still placed third overall while the Bulldogs were able to win a combined seven events.

Not only that, but Notre Dame’s boys team broke two school records in the process as Saint Louis signee and senior Evan Bruenderman now has his name on the Bulldogs all-time record board two more times.

The other record Bruenderman helped Notre Dame break was the 4×100-meter relay time of 44.08 seconds with his younger brother sophomore Cole Bruenderman and fellow seniors Hayden Jansen and Tommy Taylor. These Bulldogs made history and won the conference race by finishing with a time of 43.82.

All four of these runners also competed together in the 4×400 and took first by crossing the finish line at three minutes, 35.03 seconds.

On his own, Jansen set a new personal record time in the 400-meter dash at 52.15 to win the final conference championship for Notre Dame’s boys team.

The boys team had seven more top-four finishes outside of that as senior Zach Bleckler took second in high jump with a 5-10.75. Notre Dame sophomore Greg Dennis finished third in high jump with a personal record mark of 5-10.75. Dennis also placed in the top four of the 110-meter hurdles at 16.09.

Notre Dame’s final two top-four finishes were on the track as Taylor took fourth in the 400 (53.19), while the 4×800 team made up by seniors Evan Boyd, Cade Scobey, junior Caleb Garner and sophomore Mason Morris placed fourth (8:55.59).

Notre Dame’s boys team scored 100 points total to take third as Poplar Bluff won the conference championship with a score of 126. Jackson finished as the meet runner-up as the Indians only scored four more points [104] than the Bulldogs.

Leading the Bulldogs girls team to two conference titles was sophomore sensation Jenna Givens, who won the triple jump and helped the 4×400 team take first as well. Givens has won every single triple jump event she’s competed in this spring and became a conference champion with a mark of 36-0.25.

Making up the 4×400 team with Givens were seniors Lauren Brown, Haley Smith and junior Leah Jansen, who combined for a first-place finish time of 4:21.21. Brown, Givens, Jansen and senior Delaney Dohogne made up Notre Dame’s 4×100 team that took second overall at 52 seconds flat.

The Bulldogs girls team came up with seven more top-four finishes outside of that as Smith took second in the 1600-meter run (5:28.44).

Notre Dame’s girls final runner-up finish at the conference meet was by senior Allie Burnett in the 100-meter hurdles (17.07). Jansen was the final top-four finisher for the Bulldogs on the track as she took third in the 200-meter dash at 26.86.

The final two placements in the top four at conference for Notre Dame’s girls team were on the field as sophomore Emma Steimle took second in discus with a throw of 102-9.75. Lastly, junior Kayle Jackson finished fourth in the javelin throw with a heave of 93-3.75.

The Bulldogs finished with a total of 94 points to take third place as Jackson’s girls team won the SEMO Conference title with 168 points. Cape Central took second by only scoring one more point [95] than Notre Dame.

Both Notre Dame teams will compete in the Class 4 District 1 Meet on May 15.