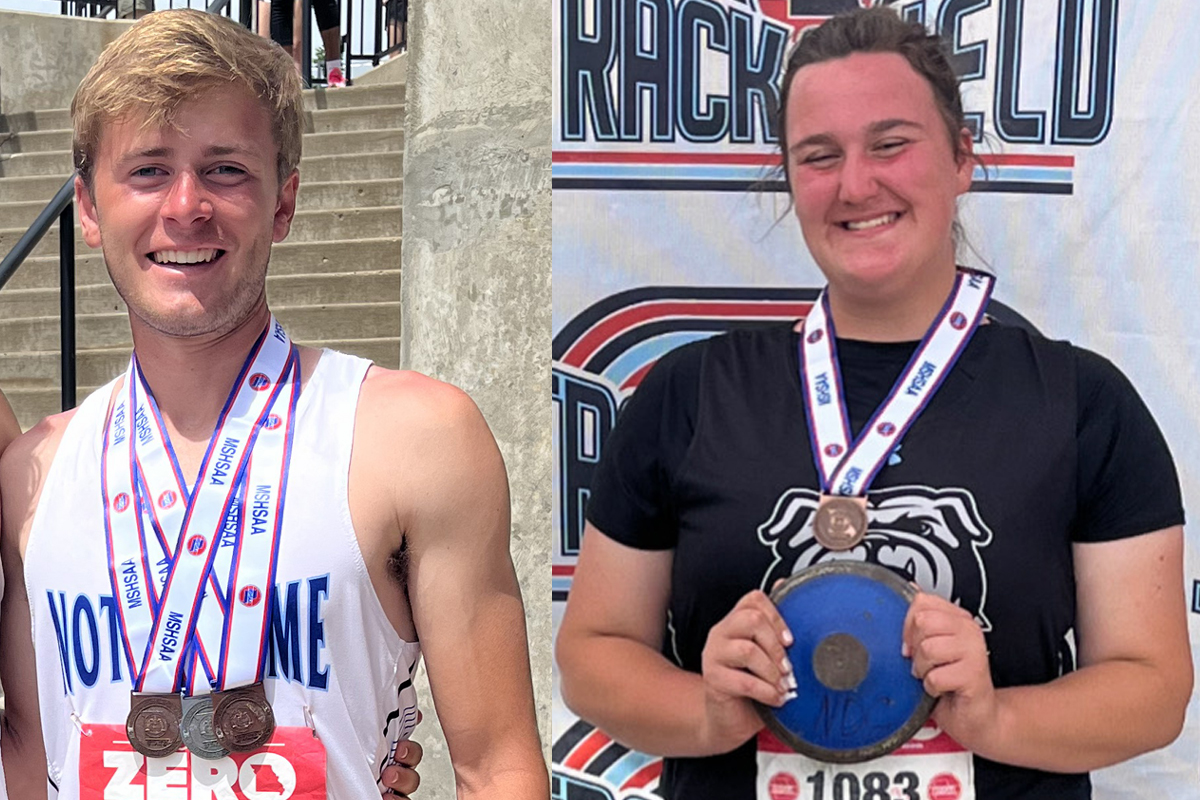 Despite competing in different classifications, the Notre Dame boys and girls track and field teams each had multiple athletes earn all-state honors on May 27 and 28 in Jefferson City.

The Bulldogs had a total of eight all-state performances as Notre Dame’s boys team finished with five athletes on the podium to take eighth place with a team score of 30 points in Class 3. Three Bulldogs earned all-state for Notre Dame’s girls squad as it finished 37th (four points).

Bringing home an all-state medal for the second-consecutive season in high jump was junior Greg Dennis, who did so with a third-place finish with a mark of six feet, five inches in this year’s event. Dennis also earned individual all-state honors in the 110-meter hurdles, where he was the runner-up with a time of 15.04 seconds (new school record).

Fellow Notre Dame junior Cole Bruenderman won two all-state medals in his own right by taking second place in triple jump and third in long jump. Bruenderman recorded a leap of 44-11.75 to finish second in triple jump, which was only 4.75 inches less than state champion Westminster Christian sophomore Joseph Anderson’s mark of 45-4.5.

Cole finished with a jump of 21-11.75 to finish third overall in long jump as the event’s state champion was Maplewood Richmond senior Jacob Miller at 22-7.5.

Bruenderman and Dennis were also on the seventh-place 4×100-meter relay team, along with junior Davis Dow and sophomore Jacob Brown. These Bulldogs finished the race at 43.68.

“Earning all-state in three events was a great accomplishment because during the season I had some ups and downs,” Bruenderman said. “My hamstring was hurting, so I had to take off four of five meets. To take second in triple jump, third in long and seventh in the 4×100 — I was very happy.

“I’m really excited for next year because we also have a couple of sophomores coming back. I feel like we’ll have a good chance of making it in the top four and winning a couple of first-place medals, too”

Duenne placed the highest out of all three Bulldogs as she took seventh overall in the discus throw with a heave of 114-07. Emma also competed in shot put and recorded a mark of 33-0.25 to finish in 13th place.

“It was a great experience for me because I never really got to go to state and perform like that,” Duenne said. “It was an experience I’ll never forget, and I’ve had this joy the past couple of weeks that’s been sticking with me because of what I’ve accomplished. I’m really proud of how I did and how good it felt to do something like that.”

Givens became a two-time all-stater in triple jump by recording a leap of 34-9.5 to take eighth place. In last year’s Class 4 triple jump event, Jenna recorded a leap of 35-5.25, which placed her fifth overall.

The only athlete for Notre Dame’s girls team to have competed at state and not earn a spot on the podium was junior Katy Turner, who took 13th place in pole vault at 9-0.25. The eighth-place mark was 10-0, but there were also six seniors who finished in the top eight.

“It’s amazing that so many of us could go back to state, and I really hope we can all just come together and push each other to keep getting better next season,” Duenne said. “We can all do it again and be better next time.”