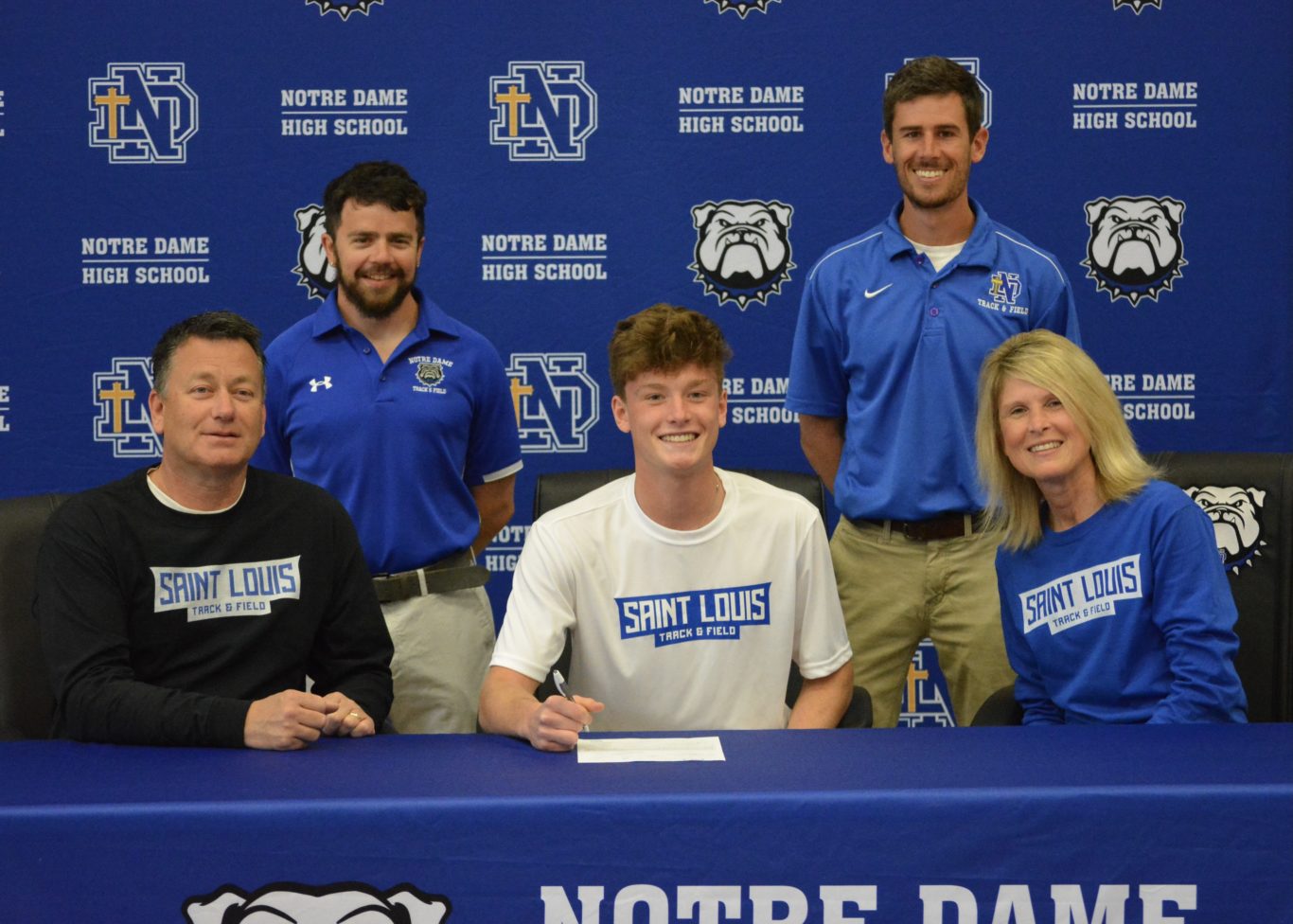 When Evan Bruenderman first started attending Notre Dame as a freshman, he initially had no intention of joining the track and field team.

Fast forward to the middle of his senior season with the Bulldogs, and Bruenderman has already signed a national letter of intent to continue his career as a jumper at Saint Louis University.

“In my freshman year, Coach [Ryan] Long was my basketball coach that season and really kept pushing me to do track,” Bruenderman recalled. “With a week before the season started, I was like, ‘All right, I’ll give it a shot.’ In that first week of practicing, I knew it was going to be a sport I loved doing.

“Ever since I started track, I knew that this is what I want to do for a long time. Just being able to go to the next level is just something that I didn’t really think about when I first started the sport, so that’s cool.”

Things couldn’t have gone better for Bruenderman after taking Coach Long’s advice since he is a two-time state qualifier and holds Notre Dame’s triple jump record with a mark of 45-feet, 9.5 inches. Bruenderman is also a member of the distance medley team that set a school record time of 10 minutes, 50.5 seconds along with his younger brother, sophomore Cole Bruenderman.

Back in the 2019 Class 4 State Meet, Bruenderman was able to earn all-state honors as he placed fifth in triple jump with a leap of 45-8.5 to cap off his sophomore year. At state as a freshman, Evan finished 14th overall with a 42-0.75.

Like every high school athlete in the nation last spring, Bruenderman was unable to compete in his junior season of track at Notre Dame due to the 2020 season because of the coronavirus pandemic. Even though Bruenderman wasn’t able to compete then, that didn’t stop him from training every single day.

“During the quarantine period, I trained every day like I would’ve in the regular season just with the hopes of having a next season my senior year,” Bruenderman said. “I put in the work every day to make this season the best that I can.”

On top of competing in the sport he loves, Bruenderman is also happy to be back with his teammates after missing all of last season. Although many events in track and field are individual, Evan said there’s still plenty of chemistry as well as accountability needed to have success.

“Especially in a relay when you’re with three other guys trying to beat the other teams and doing your part to fulfill what you need to do for your team to win,” Bruenderman said. “Track is a lot of fun. We cheer each other on every day, and we hope each person does their best.”

Bruenderman emphasized that a lot of technique and patience goes into being a jumper because there are “so many” repetitions while training. “The end of the jump and how you execute the jump is what really matters in the end,” Evan said.

Bruenderman does box jumps religiously to exaggerate his legs in order for the positions they need to be in so he can go further in each jump. Bruenderman also does a lot of arm work to have proper technique for each phase during triple jumps.

“[Knowing that I’m going to be a college athlete], I need to push myself harder than just the high-school level,” Evan said. “I will be a freshman again next year, so I’m going to be competing with other athletes that are a lot more experienced than I am. I just need to trust the process, push myself harder every day and know that in the end I will be happy with myself.”

Bruenderman said the reason why he chose SLU is because the team’s head coach sounded “really interested” and there was a spot opening for him. Evan also praised SLU’s athletic and academic department that they were a major selling point for him. “It’s also only two hours away from home, so I can see my family a lot, too,” Bruenderman said.

What Bruenderman is going to miss the most about attending Notre Dame is seeing his friends and practicing with them. Evan will also miss his coaches and teachers. “[Notre Dame] is just a good time,” he said.