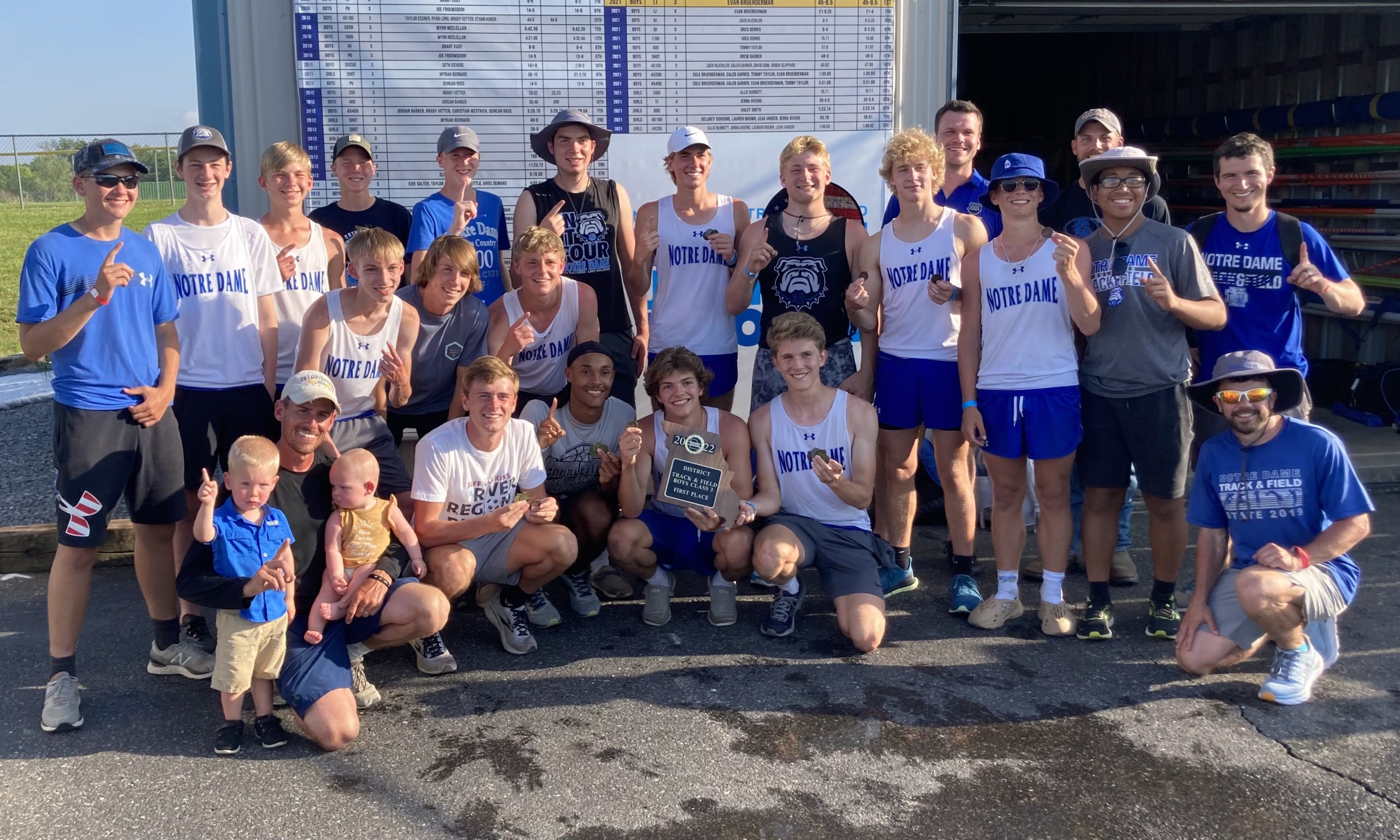 For the second season in a row, the Notre Dame boys track and field team was able to capture the Class 3 District 1 Championship. Last season was the first time the Bulldogs boys team had ever won districts, making this the second title in team history.

Notre Dame won a total of six events while qualifying for this weekend’s sectional meet in a total of 14. Winning two individual district titles on his own for the Bulldogs was junior Greg Dennis as he took first in both high jump (six feet, six inches) and the 110-meter hurdles (15.42 seconds).

The final event Notre Dame won a district title in was the 4×100-meter relay team, which was made up by freshman Connor Adams, junior Will Dodson, sophomore Emmett Pfiefer and junior Davis Dow. These Bulldogs combined for a time of 44.02 to take the gold.

Outside of his first-place finish in the 200, Brown also advanced to sectionals in the 100 (11.32), while Bruenderman will be competing in triple jump (took third at 42-7.5) on top of long jump at the sectional meet.

Dennis and Dow, who took third in the 300-meter hurdles to qualify for sectionals, were also on the fourth-place 4×200 team (1:36.28) with Brown and Bruenderman.

The final athlete for Notre Dame to qualify for the sectional meet by placing in the top four was junior Zac Ochs, who placed third in pole vault with a mark of 11-5.5.

As for the Bulldogs girls team, it competed in Class 4 District 1 due to MSHSAA’s championship success factor for private schools. Notre Dame took fourth place as the Bulldogs won three events and placed in the top four to move on to sectionals in a total of eight.

Winning two individual district titles on her own was sophomore sensation Lauren Eftink, who took first in the 1600 and 3200-meter run with times of 5:31.14 and 12:22.21, respectively.

Eftink was also on the fourth-place 4×400 team (4:21.79), along with junior Jenna Givens and freshmen Lily Carr and Courtney Tatum. Givens also qualified for sectionals individually by taking third place in triple jump with a leap of 33-7.5.

The rest of the events Notre Dame qualified for sectionals in were on the field as well as sophomore Emma Duenne won her first-ever district championship in the discus throw (109-11,75). Duenne will also compete in shot put at sectionals as she took third place in the event with a throw of 32-10.

Junior Katelyn Turner is also heading to sectionals for the Bulldogs after being the runner-up in pole vault at 9-11.75. The final athlete for Notre Dame to qualify for sectionals was freshman Jacie Smith in the javelin throw (105-5).

Both the Class 3 and Class 4 Sectional 1 meets will be held this Saturday at Festus High School.