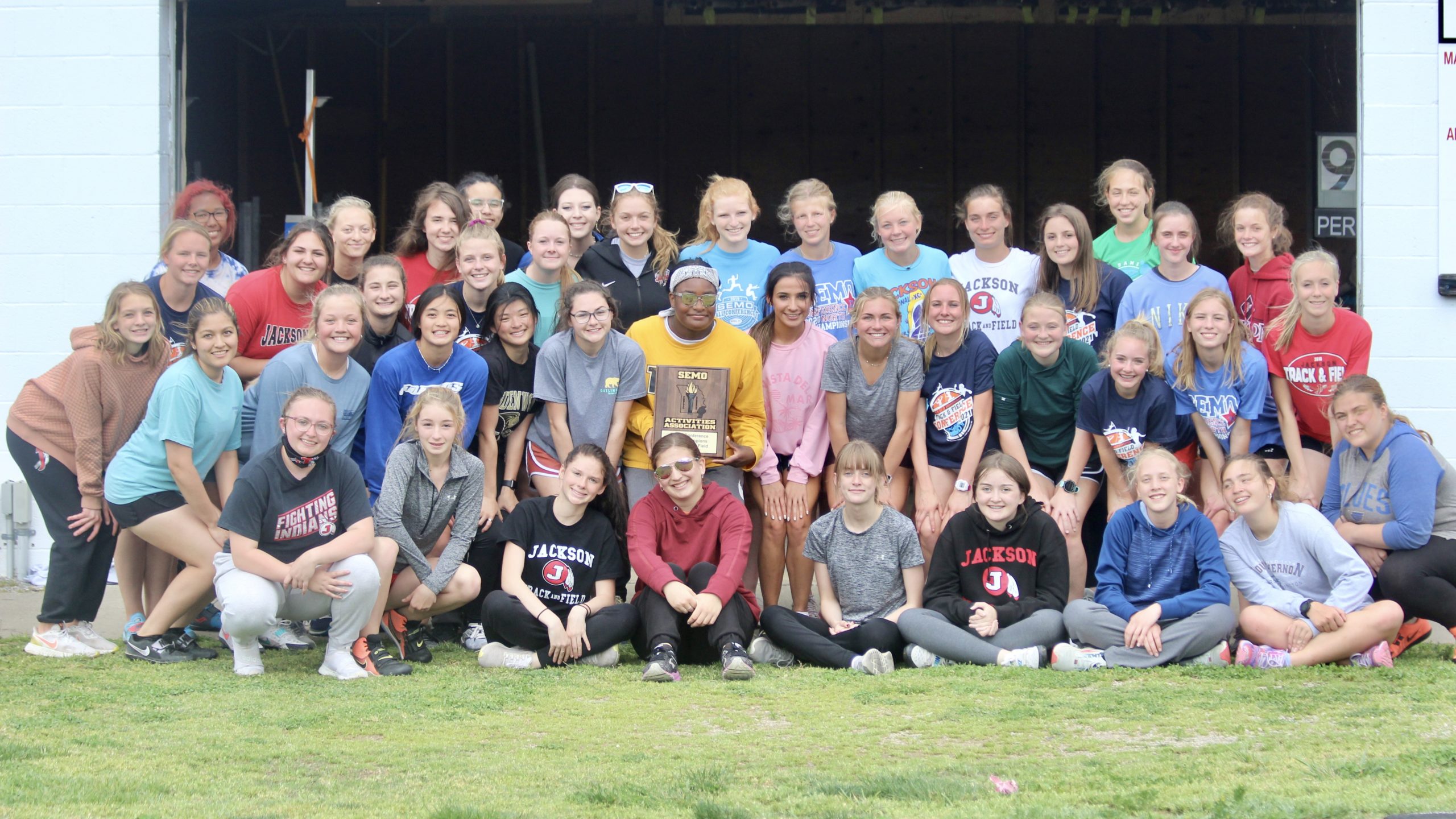 The Jackson boys and girls track and field teams were unable to defend its SEMO Conference Championships last year due to the coronavirus pandemic cancelling the 2020 spring season.

Even after missing a full campaign, the Indians girls team had no problem repeating as conference champions as they outscored runner-up Cape Central [95] by 73 points with a final score of 168. Jackson’s girls team won conference so handedly because it took first place in seven events along with four runner-up, five third-place and three fourth-place finishes.

Fliege was also a member of the first-place 4×800 team along with fellow juniors Brooklyn Burgess, Addie Heisserer and sophomore Mallorie Metzger. These Indians combined for a time of 10:33.24 to win the race.

Metzger became a conference champion in an individual event as well as she won the 400-meter dash by crossing the finish line at 1:01.5. Metzger also took second behind Fliege in the 800 at 2:25.36.

Fliege and Metzger helped the 4×400 team along with Burgess and sophomore Gracie Metzger finish in second place at 4:23.46.

The Jackson girls team’s final first-place finish on the track was by senior Elizabeth Steele, who won the 3200-meter run at 11:54.13 to take home conference gold.

Becoming SEMO Conference Champions on the field were underclassmen sophomore Briaysia Purl and freshman Felicity Pingkian, who won the discus and pole vault events, respectively. Purl took first in discus with a heave of 107 feet, 6.25 inches, while Pingkian won pole vault at 10-0.

The Indians final two second-place finishes came on the field as senior Lisken Glass was the runner-up in shot put at 33-11, while junior Hadley Wyatt finished second behind Pingkian in pole vault at 9-6.25.

Glass finished in the top four of another event by taking third in discus behind Purl with a throw of 95-4. Another third-place finish for Jackson on the field was by sophomore Stormee Rutherford in shot put (32-10).

Three other of Jackson’s bronze conference medals were on the track as the 4×100 team made up by seniors Avery Bauer, Alexis Boyles, Juliana Evans and junior Ryleigh Kilhafner took third at 52.12. Also finishing in third place was Heisserer in the 1600 (5:35.49) and sophomore London Popp in the 3200 (12:51.33).

As for Jackson’s boys team, the Indians were unable to repeat as SEMO Conference Champions as they finished second overall with 104 points to first-place Poplar Bluff’s total of 126. Jackson won three events along with two silver medals, five bronze medals and one fourth-place finish.

Liley, who is Jackson’s program record holder in javelin, took first in the event with a heave of 161-1 to be crowned the conference champion. Finishing in second behind Liley was Cape Central junior William Jones at 158-0, which is a program-record throw for the Tigers.

Havill won the conference championship in pole vault with a mark of 13-5.75 as fellow vaulter and Jackson sophomore Braeden Cain took third in the event (13-0).

The third and final win for the Indians was by the 4×800 team comprised of senior Jake Eastin, sophomore Cole Puls and freshman Zach Brazel and Bryce Gentry, who combined for a first-place finish time of 8:30.91.

Taking second twice for Jackson’s boys team was senior Evan Stephens as he was the runner-up in both the 1600 and 3200 with times of 4:33.26 and 9:51.07, respectively. Taking second outside of Stephens and on the field was junior Nolan Chrusciel, who did so in discus with a heave of 135-3.5.

Jackson’s 4×100 team took home the final bronze medal for the Indians, which was made up by senior Daniel Dickerson, juniors Javin Hitchcock, Josh Wehrenberg and sophomore Marquis Eckley. They finished with a time of 45.25 to take third.

Jackson’s lone fourth-place finisher was Gentry in the 800 as he placed behind Greenlee with a time of 2:07.12.