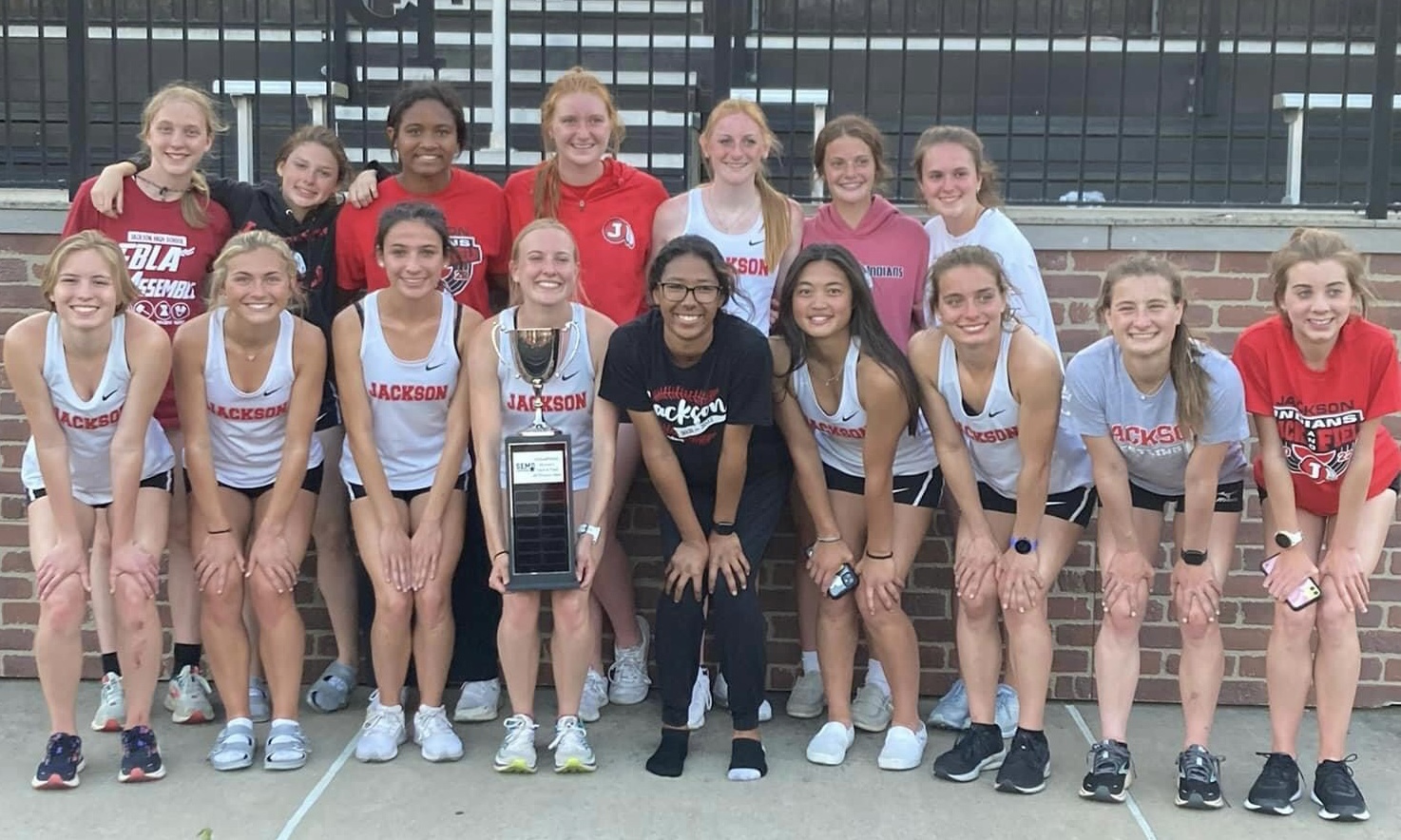 The Jackson girls track and field team poses with the SEMO Conference Championship on Friday at Cape Central. The Indians won a total of seven events for 132 overall points, which was 15 more than runner-up Cape Central (117). Submitted photo

For the second-consecutive season, the Jackson girls track and field team proved to be the best in Southeast Missouri by winning the conference meet yet again. The Indians did so by winning seven events and had 14 top-four finishes for 132 points.

Leading Jackson was Southeast Missouri State signee senior Layla Fliege, who repeated as the SEMO Conference Champion in both the 800-meter and 1600-meter runs with times of two minutes, 24.44 seconds and 5:19.98, respectively.

Fliege wasn’t done there, though, as she also helped the 4×400 (4:21.9) and 4×800-meter relay (10:33.76) teams take first. On the 4×400 conference championship team with Fliege was senior Brooklyn Burgess, junior Mallorie Metzger and junior Emma Powell, while Burgess, Metzger and senior Maite Mendez joined Layla on the 4×800 team.

The three other conference gold medals for Jackson’s girls team came on the field as junior Lillian Gibbs won both discus (102 feet, 5.5 inches) and javelin (115-0.75). Gibbs was rightfully named the SEMO Conference Most Valuable Field Performer for her efforts.

Being named the SEMO Conference Girls Most Valuable Track Athlete instead of Fliege was Dexter senior Gabby Brown, who has signed with UT Martin. Brown won three gold medals in the South Division.

Indians sophomore Felicity Pingkian repeated as the conference champion in pole vault by making a leap of 11-0, which is one foot higher than her vault from last year’s conference meet.

Another Crusader to place in the top four individually was senior Isabella Deckard, who took fourth in both the 200-meter dash (27.08) and long jump (17-1.5).

As for Notre Dame’s girls track and field team, the Bulldogs placed seventh overall with five top-four finishes for 42 points. However, several athletes for both the boys and girls teams at Notre Dame didn’t compete at conference since prom was being held the same day.

The rest of Notre Dame’s top-four finishes were all runner-ups in their respective event as sophomore Emma Duenne took second in discus (101-1.75) and shot put (33-5.25). Freshman Jacie Smith was the Bulldogs final second-place finisher as she did so in javelin with a throw of 104-6.

Moving on to the boys side, Jackson took second place with a team score of 99 as the Indians were 57 points behind conference champions Poplar Bluff (156). Jackson ended up winning three events and finished in the top four 11 times.

Repeating as the SEMO Conference Champion in pole vault was senior Collin Havill, who won the event with a leap of 14-6. Also winning an individual conference title was junior Hunter Wendel in the 3200, which he won by crossing the finish line at 10:16.1.

Taking home the third and final conference championship for the Indians was their 4×800-meter relay team, which is made up by sophomores Zach Brazel and Bryce Gentry, and juniors Cade McAdams and Cole Puls. Jackson won the race with a time of 8:15.82.

Jackson’s final two second-place finishers were senior Nolan Chrusciel and junior Evan Kiefer. Chrusciel was the runner-up in discus with a throw of 152-8, while Kiefer finished second competing in the 3200 and recorded a time of 10:18.55.

Outside of Gentry and Puls, junior Braeden Cain was the only other individual for the Indians to take third. Cain did so in pole vault with a leap of 13-0, which is his same place and mark from last year’s conference meet.

The final top-four finish for the Jackson’s boys team came in the 4×400-meter relay team as the Indians placed fourth at 3:37.81.

Notre Dame’s boys team placed eighth overall without a full squad as the Bulldogs won one event and had four, top-four finishes for a total of 36 points.

Taking home a SEMO Conference Championship for Notre Dame was junior Greg Dennis, who broke his own school record high jump with a leap of 6-8.75. He previously set the school record a few weeks back and ranks in the top 40 nationally and first in Class 3.

Outside of high jump, Dennis also took second in the 110-meter hurdles by finishing with a time of 15.84.