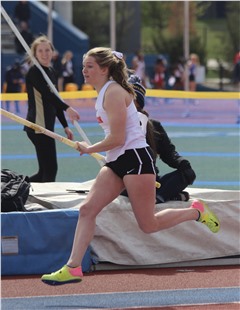 Both the Jackson boys and girls track and field teams placed second behind Poplar Bluff in this year’s SEMO North Conference Meet Friday, May 4, at Cape Central.

The girls team was only five points behind Poplar Bluff with 99 to the Mules 104 as the boys were outscored 141 to 123.

Both teams combined for a total of 14 event wins as the boys team led with nine wins and the girls finished with five.

Schumer won this year’s event with a jump of 12 feet, which was six inches higher than the meet’s runner-up, Cape Notre Dame junior Carly Pujol.

Junior Jackson Rinehart claimed another win in pole vault with a 15, which continues his undefeated streak in the event this season. He is currently ranked first in Class 5 District 1, tied for first in sectionals and ranks fifth in the state.

In the 800, it was junior Kaylee Wilson placing first for the girls with a time of two minutes, 30.25 seconds. Senior Abby Sadler came in second behind Wilson at 2:31.74.

Senior Ean Buffington came away with two individual titles as he won the 800 and the 1600 for the boys.

Another Indian who won two individual titles was sophomore Donya Marx, who took the high jump with a leap of 5-10 and the triple jump with a 43-4.

Junior Tyler Webb finished behind Marx in both events, placing second in high jump (5-8) and sixth in the triple jump.

Finishing behind Bauer was senior Margo Motes as she posted a time of 12:38.45.

Winning the boys 3200 was senior Gage Kinder with a time of 10:37.75. Kinder was almost not able to compete in the meet since he has been dealing with injuries throughout the season.

“In fact, we normally might not have had him run, but since it is his senior year and we are at the end, there really isn’t much to lose at this point,” Jackson head coach Jim Stoverink said. “He ran a very gutsy race to become the 3200 meter conference champion. Coach [Andrea] Talley and I are very proud of him. He showed a lot of courage and leadership.”

The final event Jackson swept was the 4×800 as the girls team, compiled of sophomore Ashlyn Prince, Wilson, Motes and Sadler, won the race with a time of 10:31.34.

The other events Jackson did not sweep but did have a first-place finisher was discus and the 400.

Senior Justin Crane won the discus throw with a heave of 147-11 as sophomore Aaron Brown took first in the 400 with a time of 50.68, finishing ahead of two Poplar Bluff runners.

Senior Lauryn Varner earned all-conference honors in two events starting in high jump with a mark of 4-6 to take third and was the runnerup in long jump with a 15-9.

Another Indian to earn allconference was freshman Rhet Liley, who finished third in Javelin with a throw of 140-6. This performance broke the school record, and it was only Liley’s fourth time competing in the event.

Jackson now looks toward the Class 5 District 1 Meet where the Indians will once again face off against Poplar Bluff. The meet is this Saturday at Oakville.