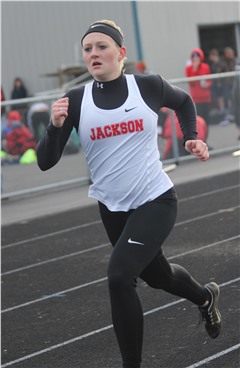 The Jackson boys and girls track and field teams traveled north on I-55 for the second meet of the season, which was the Festus Early Bird held on March 23-24 at Festus High School.

The boys team was able to take second overall with a score of 98 behind first place Lafayette (Wildwood), which put up a meet-high 104.

Only one individual took first for the boys team as junior Jack Rinehart won the pole vault event with a mark of 13 feet, six inches in the finals. He tied with De Soto’s Mayson Derousse as both earned nine points.

The 4×200, comprised of freshman Daniel Dickerson, sophomore Donya Marx, sophomore Aaron Brown and junior Caleb Craft, won the race with a time of one minute, 36.01 seconds.

The 4×400 team won its race with a time of three minutes, 36.6 seconds. Brown, Dickerson and Marx were also on this team along with senior Ean Buffington.

Brown also placed second in one of the individual events, which was the 400-meter run with a time of 51.61 seconds. This was .12 seconds behind first-place Lazarus Williams out of St. Louis University High School.

As for Jackson’s throwers, seniors Justin Crane and Owen Leible each placed in the top five in the discus and shot put events.

Crane finished in the top three of both events by first placing second in shot put with a heave of 48 feet, 5.75 inches. He finished third in the discus throw with a mark of 137-00.

The girls team placed ninth overall in the meet with a score of 33.83 as the Indians only placed in the top eight five times.

The lone first-place winner for the Jackson girls was senior Katie Schumer in pole vault as she recorded a mark of 10-06 to earn 10 points.

Competing in the same event to place in the top five was sophomore Erin Huff, who tied for third with a 9-06.

The other girl to place the highest for Jackson was senior Lauryn Varner in high jump, where she tied for second with a leap of 4-10.

Also taking second place was the 4×800 team, which finished with a time of 10:24.15. The team is made up by senior Julia Kidwell, junior Kennedy Bauer, senior Margo Motes and junior Kaylee Wilson. Wilson is coming off a year where she missed her sophomore track and field season due to injury.

Both teams will now compete in the Jackson Invitational Saturday.